Egypt is increasingly seeking to support the Sudanese economy through infrastructure development and the implementation of many industrial and commercial projects. 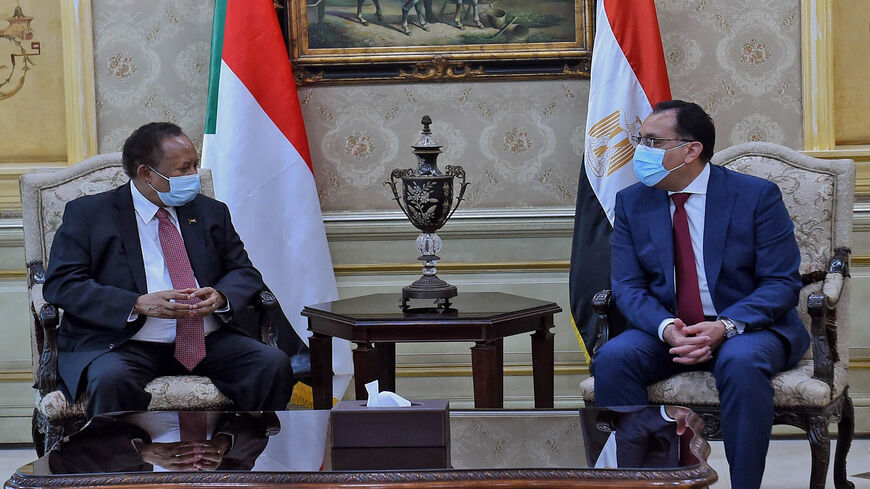 EgyptAir and Sudan Airways signed April 16 a memorandum of understanding to provide the Sudanese airline personnel aviation and hospitality training and to exchange the Egyptian expertise with the Sudanese side, to boost opportunities for trade exchange between the two countries.

On April 12, Sudanese Minister of Transport Mirghani Mousa and his Egyptian counterpart, Kamel al-Wazir, met in Khartoum. Wazir expressed his country’s readiness to meet all of the Sudanese demands to develop the transport sector and the port of Wadi Halfa. The discussion also focused on a number of projects, including the construction of a railway network between Egypt and Sudan and the promotion of trade exchange.

Egyptian President Abdel Fattah al-Sisi met April 6 with the head of Sudan's Sovereign Council, Abdel Fattah al-Burhan, in Khartoum. Sisi stressed “Egypt’s ongoing support for the Sudanese government and people … so as to upgrade Egyptian-Sudanese relations to serve as a model for comprehensive developmental partnership and economic integration.”

Burhan, for his part, stated, “Sudan is looking forward to implementing joint projects and to promote cooperation prospects between Egypt and Sudan at various levels, especially at the political, economic, security and military ones.”

Commenting on the promotion of bilateral economic relations, Yaman al-Hamaki, a professor of economics at Ain Shams University in Cairo, told Al-Monitor that there are promising opportunities to strengthen ties between Egypt and Sudan, in light of their history and the fact that they are neighbors. These factors would generate more opportunities for economic and trade agreements that would serve them both, she added.

Hamaki said that the Grand Ethiopian Renaissance Dam (GERD) crisis is a major challenge requiring an Egyptian-Sudanese coordination — be it political or economic — in order for the two countries to preserve their shares of the Nile waters. It is not a luxury for them to boost economic relations, but rather a pressing requirement that Egypt and Sudan must support by maximizing trade exchange and joint investments, she added.

Hamaki pointed out that Egyptian businessmen have had successful investment experiences in Sudan’s agriculture, livestock and education fields over the past years, and that encouraging the Egyptian economic investments in Sudan will increase trade exchange volume and investments in the years to come.

Hamaki believes that the success of Egypt's economic experience in Sudan will enable it to invest in other African countries, especially in the member states of the African Continental Free Trade Area (AfCFTA) agreement. She noted that Egypt must coordinate with the AfCFTA member states to develop customs and tax systems, and to determine and overcome obstacles to this agreement so as to develop trade exchange between member states.

Salah Halima, deputy chairman of the Egyptian Council for African Affairs, told Al-Monitor that the Egyptian-Sudanese economic cooperation shows how deep and developed these relations have become following the ouster of Omar al-Bashir, as harmony has prevailed over some political, social and economic issues. He added that removing Sudan from the list of countries sponsoring terrorism, its openness to the world, and its receipt of loans and financial aid have all encouraged Egypt, as a neighboring country, to reach out to Sudan and transfer many of its development experiences to achieve integration. He noted that the historical relations between Egypt and Sudan, the geographical distance between them, their social and cultural ties, and their shares of the Nile waters are common interests between the two countries and unite their peoples.

Halima noted that just as Egypt and Sudan reached a strategic security and military alliance, they also achieved strategic economic partnership that was reflected in the Egyptian investments in Sudan, starting with land infrastructure projects and the electricity interconnection line between the two countries. Such projects are the basis of strong economic relations and successful trade exchange, he stated.

Halima said that Sudan has major agricultural and animal wealth capable of bridging the food gap in the Arab world and achieving food security for Egypt. He added that the transfer of Egyptian expertise to Sudan and investments serve the two countries, and stressed that the success of the Egyptian experience in Sudan would pave the way for Egyptian investments in other African countries in order to create an African economic entity. He noted that Sudan is Egypt's gateway to Africa.

Former Deputy Foreign Minister Rakha Ahmed Hassan told Al-Monitor there has been a major rapprochement between Egypt and Sudan lately, which is reflected in their coordination and harmonious positions regarding the GERD. In addition, there has been economic rapprochement between Cairo and Khartoum with Sudan resorting to Egyptian expertise to achieve economic reforms, the implementation of Egyptian projects to develop the infrastructure or train Sudanese workers, he said, adding that Egypt has been also considering projects that could serve Sudan economically, and eventually the two countries’ common interests.

Hassan stressed that the Egyptian-Sudanese economic relations will not be affected by the GERD crisis, because there is Egyptian and Sudanese desire to establish multiple projects and increase investments, which will be beneficial to the two countries. He pointed out that a resolution to the GERD crisis will depend on an Ethiopian political decision, since Egypt and Sudan are on the same page.