Egypt wants to support Sudan in ridding its school curricula of extremism, which was established under former Sudanese President Omar al-Bashir and following the Muslim Brotherhood’s seizure of power in Sudan. 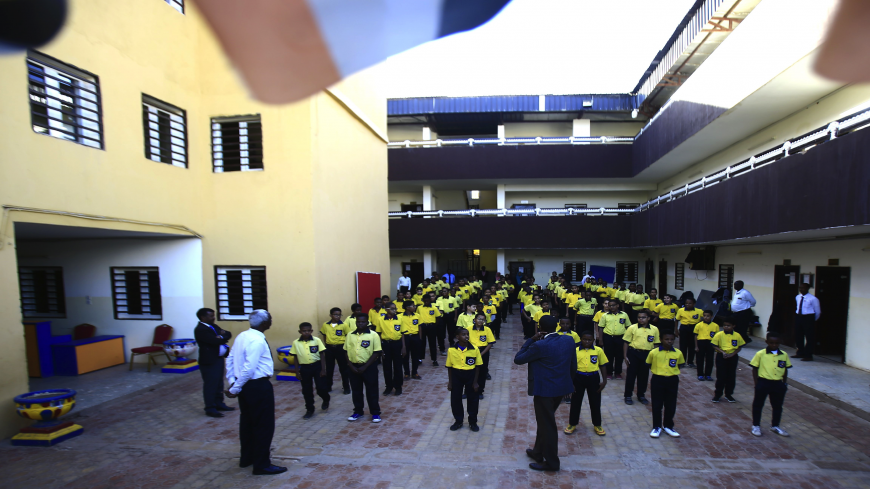 Pupils line up in the courtyard of a school in the Sudanese capital, Khartoum, on Jan. 8, 2019. - ASHRAF SHAZLY/AFP via Getty Images

The Egyptian parliament on Feb. 7 called for cooperation with Sudan on revising and ridding its school curricula of extremism.

Parliament member Farida al-Shobashi said in parliament, “The Egyptian parliament encourages the Egyptian ministries of education and endowments to support Sudan in its unique experience in revising its school curricula to cleanse them of extremist content.”

Shobashi added, “Egypt has experience in combating extremism and confronting takfirist ideas. Therefore, Egyptian experiences must be transferred to Sudan to help it rid its school curricula of any content tainted by extremism.”

The People's Initiative for Strengthening the Sudanese-Egyptian Relations also announced its readiness to participate in revising the curricula.

Hatem Bashat, a member of the said initiative, said at the Feb. 7 parliament session, “The initiative called for reviewing the Sudanese curricula and removing any offensive material to Egypt in order to build generations in the two brotherly countries devoid of any destructive ideas.”

A number of public figures from Sudan and Egypt had announced on Jan. 28 the launch of the People's Initiative for Strengthening Sudanese-Egyptian Relations.

Egyptian Minister of Education Tarek Shawki revealed on Feb. 6 that a number of Arab countries, including Sudan, called for implementing the Egyptian curriculum in their schools. He said an educational cooperation protocol was signed between Egypt and Sudan.

On Jan. 25, Sudan’s Prime Minister Abdalla Hamdok announced the formation of a committee to review and rid the Sudanese curricula — which was developed under ousted President Omar al-Bashir — of extremism.

Sudanese Minister of Religious Affairs and Endowments Nasruddin Mufreh said in a press statement on Jan. 27 that “Sudan decided to rid the school curricula, especially the Islamic education curricula, of the extremist and terrorist ideology to make it consistent with the general framework and goals of moderation.”

The US-based Al-Hurra website revealed excerpts that contained extremist ideas in the Sudanese curricula under Bashir. Chief among these paragraphs came in an Islamic culture book taught to students of the Sudanese Al Neelain University. The book included the phrase, “Belonging to atheistic schools such as communism, secularism and capitalism is tantamount to apostasy as far as Islam is concerned. If those who follow such ideologies claim to be Muslims, then they are hypocrites. … They are called to repent. Otherwise, they are treated as apostates while alive and even after they die.”

Sudan has resorted in the past months to Egypt to develop its curricula in Sudanese universities. In October 2020, Egyptian Minister of Education Khaled Abdel Ghaffar and his Sudanese counterpart, Gabriel Changson, signed a cooperation protocol in the field of higher education to cooperate in preparing study plans, curricula and textbooks in universities.

Also, in August 2020, Cairo University announced the reopening of its branch in the Sudanese capital, Khartoum, to receive Sudanese students after a 27-year closure.

In a related context, Sudanese journalist Mohamed Osman told Al-Monitor, “The Egyptian-Sudanese cooperation in developing school curricula is ongoing, but it was scaled up in the wake of the dismissal of Brotherhood-affiliated President Omar al-Bashir.”

Osman added, “Egypt is keen to support Sudan in getting rid of the remnants of the Brotherhood’s rule, especially as far as education is concerned. This is especially true after the Brotherhood published its reactionary ideas in school curricula that included takfirist and extremist paragraphs.”

He continued, “Egypt was affected by the extremism of the Muslim Brotherhood in Sudan, which would encourage unrest in Egyptian-Sudanese relations. Therefore, Cairo is trying to help Sudan cleanse its curricula of any Brotherhood ideas.”

Osman said, “After the Sudanese revolution and the overthrow of Bashir, Egypt sought to send educational missions to Sudan and Egyptian teachers to Khartoum to ensure rapprochement between the two countries. Also, education officials in Sudan held meetings with officials in Egypt to benefit from the Egyptian experience in dealing with extremist Brotherhood ideas.”

In this vein, Sudanese Minister of Higher Education Intisar Soughayroun discussed on Jan. 25 with Egyptian Ambassador to Khartoum Hossam Issa cooperation in the field of education between the two countries.

In October 2020, Sudan’s Minister of Higher Education discussed with the Egyptian Minister of Endowments Mohamed Mokhtar Gomaa ways to deal with extremist ideas.

For his part, Sudanese journalist Fikri Abu al-Qassem told Al-Monitor he “rejects any Egyptian-Sudanese cooperation in developing the Sudanese curricula.”

“Sudan is aware of its problems and crises in school curricula, and it insists on removing any residues of extremism from the Bashir era without any Egyptian interference,” he said.

“Egypt wishes to participate in reviewing the Sudanese curriculum, not assist Khartoum in confronting extremism. It wants to control the Sudanese intellectually and boost Egyptian influence in Sudan,” Qassem added.

“Egyptian participation in reviewing school curricula in Sudan or any educational cooperation between the two countries affects the Sudanese identity. The Sudanese must take charge of education affairs without cooperation with Egypt or any country that spreads its ideas among future Sudanese generations,” he concluded.