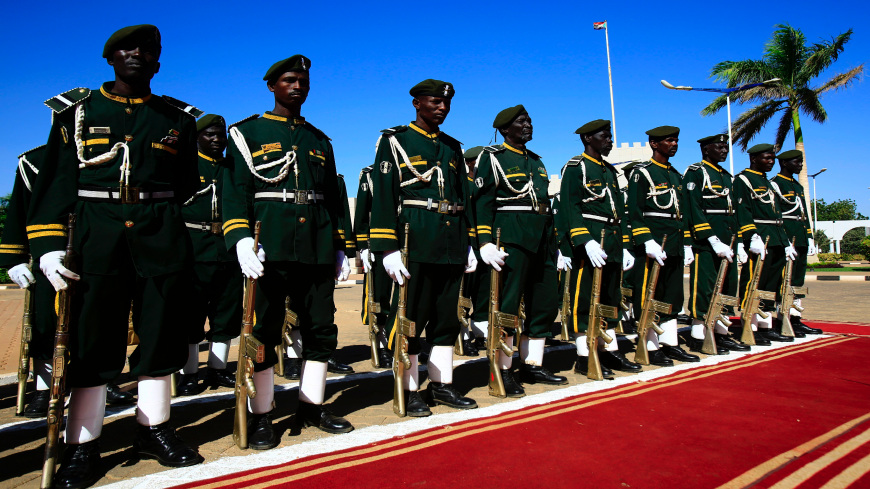 A Sudanese honor guard welcomes Egypt's Minister of Defense and Military Production (unseen) during his visit to Khartoum on Nov. 25, 2018. - ASHRAF SHAZLY/AFP via Getty Images

The military cooperation agreement came on the sidelines of a visit by a Sudanese military delegation, led by MIC Deputy Director-General Brig. Gen. Mutasim Abdullah al-Hajj, on Nov. 20 to the National Organization for Military Production headquarters and a number of military production companies in Egypt. The Sudanese delegation visited a number of departments at Military Factory 300, namely the departments of the small weapons ammunition production and the multi-machine gun production.

The Sudanese delegation also visited on Nov. 20 the Arab Organization for Industrialization (AOI), which includes a number of military product factories and manufacturers of other things such as cars and wood products.

During the visit, AOI head Lt. Gen. Abdel Moneim al-Terras said that “the organization is utilizing all its capabilities and technical and technological expertise so as to meet the needs of our African continent.”

He said “the discussion [with the visiting Sudanese delegation] was centered on cooperation with Sudan and participation in all comprehensive development projects. This is added to training the Sudanese cadres in the AOI training centers.”

The discussion at the Aug. 19 meeting was centered on ways to enhance joint cooperation between Egyptian military production companies and their Sudanese counterparts in a number of military and civil fields, with the aim being to advance a model for cooperation among African countries and achieve strategic partnerships that serve the interests of both sides.

Egypt has for years been interested in consolidating military relations with Sudan — especially in arms industrialization — and in promoting Egyptian military products in the Sudanese market. In February 2017, former Egyptian Minister of Military Production Maj. Gen. Mohamed al-Assar announced the inauguration of a permanent exhibition of the ministry’s military products in Khartoum.

Meanwhile, Sudan was keen to participate in the arms exhibitions held in Egypt. Khartoum took part in the Egypt Defense Expo 2018, dubbed EDEX, in Cairo in December 2018.

The military cooperation between Egypt and Sudan is not limited to military industrialization. It also involves military training and exercises. On Nov. 14, the Egyptian and Sudanese air forces carried out joint exercises dubbed Nile's Eagles-1.

In this context, the Egyptian Ministry of Military Production’s spokesperson, Mohamed Eid Bakr, told Al-Monitor, “Egypt is interested in boosting relations with Sudan in various fields, including military industrialization. Cairo is keen on preserving Khartoum's interest and strengthening its national security.”

Bakr added, “There will be future steps and meetings between Sudan and Egypt to activate the military industrialization cooperation agreement between the two countries.”

In the same vein, Maj. Gen. Nasr Salem, an adviser at the Nasser Higher Military Academy, said that “Egypt’s policy is to strengthen relations with Sudan by meeting its needs, especially in the military field.”

Salem told Al-Monitor, “The cooperation agreement will include the establishment of a joint production line for the manufacturing of weapons and ammunition between the two countries.”

He further said that “the agreement serves both countries, as it opens to Egypt an arms market in Sudan and thus in Africa. That is what Cairo seeks from its locally manufactured and export weapons plan, launched in February.”

Minister Assar had announced in February a plan to locally manufacture weapons for a period of three years, under which military production companies would manufacture tanks, armored vehicles and communications equipment for the Egyptian army.

Salem added, “Sudan will benefit from the agreement by locally manufacturing the arms it needs and reducing the import of weapons.”

He pointed out that “Egypt is intensifying its steps to strengthen cooperation with Sudan, especially in the military fields, so as to prevent any country targeting Cairo from exploiting Sudan and using it to threaten the Egyptian national security, as Turkey used to do under the rule of former Sudanese President Omar al-Bashir.”

Sudan announced in 2017 the signing of a series of cooperation agreements in the military, security and defense sectors with Turkey during President Recep Tayyip Erdogan's visit to Khartoum.

Salem added, “The military cooperation between Egypt and Sudan will have a positive impact on the Grand Ethiopian Renaissance Dam (GERD) issue, as the two countries will have common national security-related interests. That will ensure that they unify positions and interests, even in the GERD crisis.”

He explained, “Sudan needs Egyptian weapons, and it will either import them or benefit from Cairo’s experience in the manufacture of weapons and ammunition. The Egyptian weapons are cheap compared to the weapons that Khartoum imports from Western countries, and they suit the needs and capabilities of the Sudanese army. That is because the circumstances and the surrounding environment are similar for the Sudanese and Egyptian armies.”