Egypt reiterated its support for Sudan following an attack by Ethiopian forces on Sudanese military troops near the border, at a time of deadlock between the three countries over the controversial dam Addis Ababa is building on the Blue Nile. 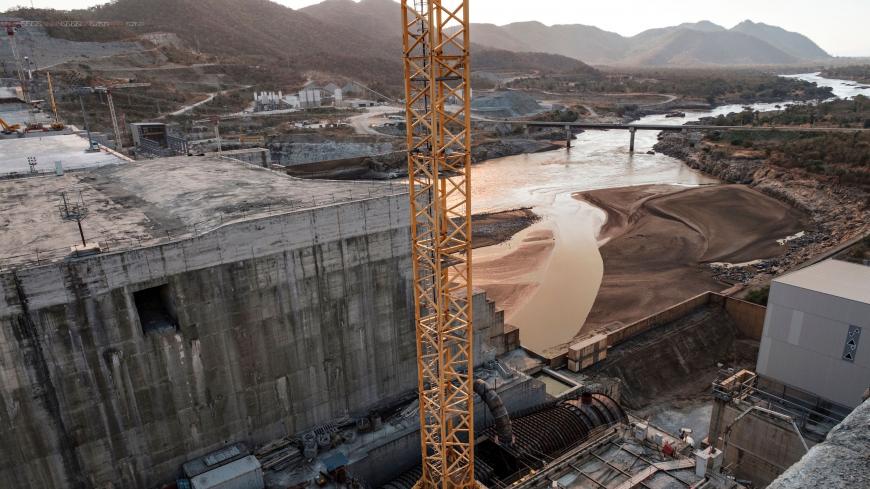 A general view of the Blue Nile River as it passes through the Grand Ethiopian Renaissance Dam near Guba in Ethiopia, on Dec. 26, 2019. - EDUARDO SOTERAS/AFP via Getty Images

“Egypt reiterates its full solidarity with brotherly Sudan and affirms its support to the country’s right to protect its security and sovereignty over its territory,” the ministry said in a statement.

The statement continued, “Egypt is following these dangerous field developments with great concern … and underlines the need to take all possible measures to guarantee that such incidents against Sudan will not be repeated in the future.”

The Sudanese army said Dec. 15 that a military patrol was ambushed by Ethiopian forces and militias in the Jabal Abutiour region in al-Qadarif province in eastern Sudan. The Sudanese army did not say how many soldiers were killed or injured, but local media put the death toll at four and said a dozen others were injured.

The attack was the latest spillover from the internal conflict that erupted in Ethiopia in November between federal forces and regional authorities in the northern Tigray region. The conflict has sent tens of thousands of Ethiopian refugees into Sudan to flee violence in Tigray.

Egypt and Sudan, two downstream countries, are locked in a dispute with Ethiopia over a giant hydroelectric dam being built by Addis Ababa on the Blue Nile, from which 85% of the Nile water comes.

Cairo fears that the Ethiopian dam will reduce its annual share of the Nile River, Egypt’s only source of freshwater. Khartoum, meanwhile, thinks the dam can help Sudan generate electricity and regulate the Blue Nile water, but wants guarantees about the dam’s safe and adequate operation in order to preserve its own dams. African Union-sponsored negotiations between the three nations to reach an agreement on the project have failed to yield any results.

Sudan boycotted the latest round of the Nile dam negotiations Nov. 21, demanding a change in the negotiations methodology to make a breakthrough in the tripartite talks.

Hassan Abu Taleb, an expert at Al-Ahram Center for Political and Strategic Studies, said he believes Egypt's support for Sudan on the border issue was not related to the impasse in the Nile dam talks.

“Egypt reiterated support to the right of a brotherly country to protect its border and territory against any foreign assault,” Abu Taleb told Al-Monitor by phone.

He said the Egyptian statement condemning the Ethiopian attack aimed to underline Egypt’s rejection of any assault on the territory of friendly countries on one hand, and support Sudan in countering threats against its security on the other.

Downplaying the impact of the border attack on the Ethiopian-Sudanese relations, Ethiopian Prime Minister Abiy Ahmed said the incident will not break the bond between the two countries. “We always use dialogue to resolve issues. Those fanning discord clearly do not understand the strength of our historical ties,” Ahmed tweeted Dec. 17.

Abu Taleb noted that Sudan was the party that boycotted the Nile dam negotiations due to the failure of the African Union-sponsored talks to make any breakthrough. “Egypt still sees the negotiations as the only way to reach a binding agreement that serves the interests of the three countries,” Abu Taleb said.

Maj. Gen. Gamal Mazloum, a military expert and adviser at the Nasser High Military Academy, concurred with Abu Taleb that the Egyptian condemnation of the Ethiopian attack on Sudanese troops was not related to the current deadlock in the Nile dam talks.

“Sudan constitutes a strategic depth to Egypt and any attack on Sudan poses a threat to Egypt’s national security,” Mazloum told Al-Monitor. “It is natural for Egypt to back Sudan’s right to defend its territory against any assault given the deeply rooted relations between the two countries.”

Mazloum noted that Ethiopia was unable to maintain strict security along its border with Sudan. The two countries share a 1,600-kilometer-long (nearly 1,000-mile) border.

Sudanese Prime Minister Abdalla Hamdok met with his Ethiopian counterpart in Djibouti on Dec. 20 on the sidelines of a summit of the Intergovernmental Authority on Development, an East African regional bloc comprising eight countries. Officials from the two countries met in Khartoum on Dec. 22 for talks on the demarcation of their borders.

Mazloum said Egypt’s relations with Sudan have seen a major leap following last year’s removal of the regime of Omar al-Bashir. “Egypt provides military training to the Sudanese at Egyptian military academies,” he said. The military expert added that Sudanese forces participated in November in a joint military exercise in Egypt, along with forces from Saudi Arabia, the United Arab Emirates, Jordan and Bahrain.

Sudanese Ambassador to Egypt Mohamed Elias said Dec. 21 that Khartoum and Cairo were seeking to establish a strategic partnership between the two countries. During a training session for religious preachers in Cairo, he said, “Egypt and Sudan are capable of building a bloc that can help in achieving security, welfare and stability for both countries.”