Egypt and Sudan carry out joint military training, further deepening their military ties, amid the faltering negotiations over the Grand Ethiopian Renaissance Dam. 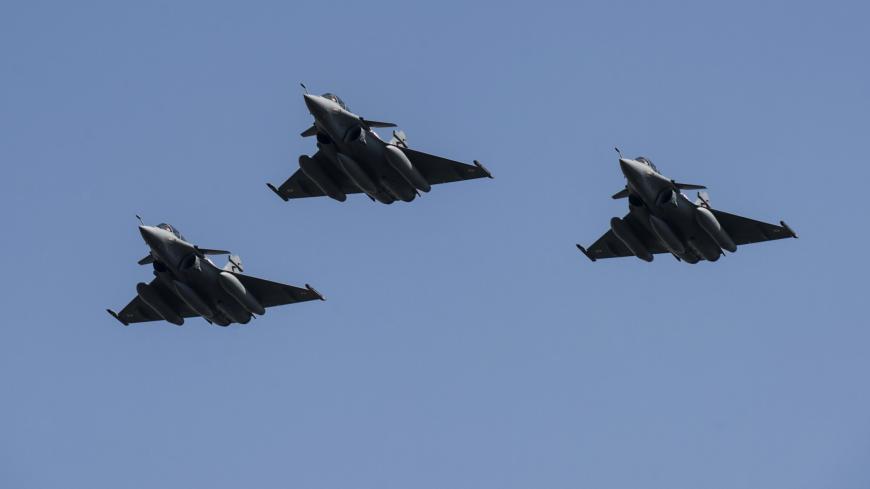 Egypt and Sudan are holding joint military exercises that will run until Nov. 26, the latest indication of deepening military ties between the two neighbors sharing the Nile.

The exercises come as tensions have risen with Ethiopia over its Grand Ethiopian Renaissance Dam project.

The maneuvers include joint combat operations between the Egyptian and Sudanese air forces and multi-role combat aircraft exercises from both sides to carry out a number of offensive and defensive sorties on targets, while the Saiqa Forces carried out drills on combat search and rescue work, Rifai's statement said.

Hani Raslan, an expert in Sudanese affairs in the Nile River basin studies unit at the government-affiliated Ahram Center for Political and Strategic Studies in Cairo, told Al-Monitor over the phone that this training is a qualitative bilateral development in Egyptian-Sudanese relations since the ouster of Sudanese President Omar al-Bashir on April 11, 2019.

Raslan added, “The general nature of relations between the two countries was tinged with tension, especially under Bashir’s rule. Although the general tension in their relations was punctuated by truce and calm in some periods, the general policy was marred by a lack of harmony, which continued even after Bashir’s ouster, which is the result of the negative image his previous regime established toward Egypt. Today, the situation has changed completely.”

What bothered Egypt the most was the fact that Bashir had granted Turkish President Recep Erdogan a foothold on the Red Sea coast when he signed an agreement at the end of December 2017 granting Turkey — which is Egypt's archrival in a wider regional conflict over political Islam — the right to build a naval dock for the maintenance of civilian and military ships in the Sudanese island of Suakin overlooking the Red Sea, near the Egyptian border. Observers saw the move back then as an attempt by Turkey to establish a military base, which represents a threat to Egyptian national security. Meanwhile, the future of this agreement is unknown, although there is speculation it will be suspended since Bashir was ousted.

Raslan said, “Today, post-Bashir Sudan stands at a crossroads. There are common challenges for both Egyptian and Sudanese national security. Egypt is the country most concerned with the stability and security of Sudan because it is an integral part of the Egyptian national security; instability in Sudan will represent a burden on Egyptian national security. This is why Cairo is keen to follow the political process in Sudan and support all opportunities for peace and stability, as well as increase cooperation at the military level between both countries.”

He added, “There are common issues between the two countries related to the waters of the Nile and the Grand Ethiopian Renaissance Dam, and others related to the security of the Red Sea, and the situation in Libya.”

The Egyptian army's chief of staff, Lt. Gen. Mohamed Farid, and a high-ranking military delegation visited Sudan on Oct. 31 to discuss ways to enhance military and security cooperation between the two countries.

During the visit, Farid met with the chief of staff of the Sudanese Armed Forces, Lt. Gen. Mohammed Othman al-Hussein, and Sudanese Defense Minister Maj. Gen. Yassin Ibrahim. The two sides agreed to enhance joint action in training, border security and combating terrorism, and for there to be greater cooperation in other areas.

Osman Mirghani, a Sudanese analyst and editor-in-chief of the independent daily Al-Tayar, told Al-Monitor that military cooperation between the two countries is a product of common interests and national security needs.

The Sudanese News Agency reported Nov. 16 that other military maneuvers are being arranged between the two countries for later in 2020 as well as 2021.

Raslan attributed the increase in security coordination and military cooperation between the two countries to the visit of the head of the Sudanese Sovereignty Council, Abdel Fattah al-Burhan, to Cairo on Oct. 27, where he met with Egyptian President Abdel Fattah al-Sisi.

After their meeting, Sisi and Burhan stressed the importance of national security issues between the two countries, including the water issue, as they noted that both countries are committed to reaching a binding legal agreement that guarantees clear rules for the process of filling and operating the Grand Ethiopian Renaissance Dam as well as achieving the common interests of all parties, according to a statement from the Egyptian Presidency on Oct. 27.

Egypt and Sudan have reservations about the giant hydroelectric dam that Ethiopia is building on the Blue Nile and its operating schedule, as all negotiations between the three countries have failed for a full decade; the last talks were on Nov. 4, when Egypt and Sudan announced yet one more failure to reach an agreement with Ethiopia on a methodology for completing negotiations on filling and operating the dam. The African Union-sponsored negotiations ended without setting a date for another round.

Press reports indicate that the recent exchange of visits between Egyptian and Sudanese military leaders, which culminated in the joint military training that is currently being held, is a warning message to Ethiopia that if negotiations continue to falter, a military solution may be on the table.

On Oct. 23, outgoing US President Donald Trump warned during a phone call with Sudanese Prime Minister Abdullah Hamdok against the possibility of Egypt resorting to bombing the dam if no agreement is reached.

Mirghani refused to link military cooperation and joint training between Egypt and Sudan to the possibility of resorting to a military solution on the dam. “The training has nothing to do with threatening the security of any other country; Sudan had previously conducted the same maneuvers in the same region three years ago with the Saudi air force. It is normal for military relations between Egypt and Sudan to grow not only in the interest of the two countries but even for the region because military cooperation contributes to strengthening stability in the region,” he said.

Raslan said, “There is no point in talking about scenarios for a military solution regarding the Grand Ethiopian Renaissance Dam because the Egyptian leadership, and as President Sisi himself said, has explicitly stressed that negotiations will not be resolved militarily, but through negotiation, even if this path is difficult and long.”

Raslan added, “Are there other scenarios in case of extreme tension? This is a matter that cannot be taken into account, as no information is available in this regard. Too much talk about the military solution is a matter of excessive discussion with no context.”