Egypt has announced a plan to boost local manufacturing of weapons to boost the capacities of its army and with the ultimate aim to export them to Africa. 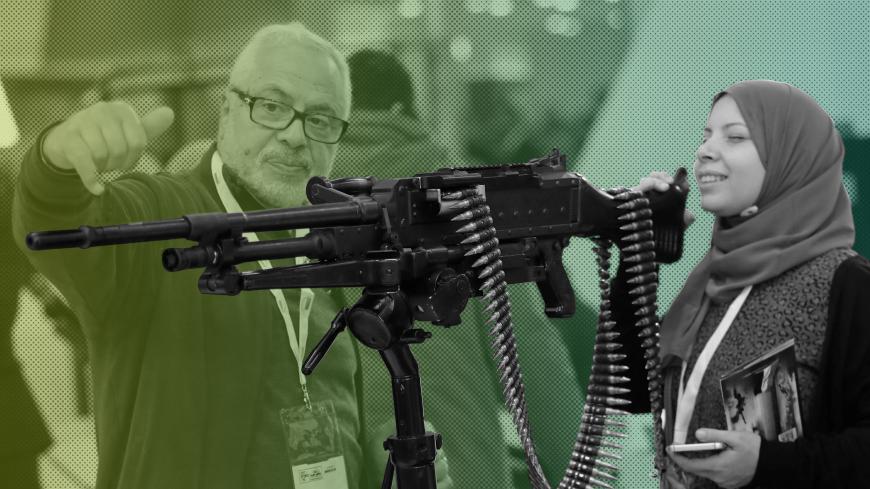 People look at a weapon at the Egyptian stand during the last day of Egypt Defense Expo, showcasing military systems and hardware, in Cairo, Egypt, Dec. 5, 2018. - REUTERS/Mohamed Abd El Ghany

On Feb. 25, Minister of State for Military Production Mohamed al-Assar announced a plan to develop the arms and ammunition production of the companies affiliated with the ministry, with a total investment of about 7.5 billion Egyptian pounds ($479 million).

Assar said in the statement, “The plan includes the modernization and addition of 84 production lines. After its implementation, Egypt will not import a single round of ammunition. Egypt wants Egyptians to manufacture their own weapons and the plan needs three years to be properly implemented.”

On Feb. 17, Sisi also inspected the manufacture of an Egyptian armored vehicle, dubbed the Sinai 200. Assar said in his Feb. 25 statement, “It is a very efficient armored vehicle to meet the needs of the Egyptian army. It is fast and flexible and has a strong network for risk prevention during mission execution.”

Egypt is currently working to develop the arms industry and locally produce weapons to export them. In December 2018, Egypt organized the International Defense Exhibition (IDEX), during which the Egyptian armored vehicle, Temsah-3 (Arabic for crocodile) was presented to the participants. The vehicle consists of six seats so the driver, the commander of the vehicle and four soldiers can fit in, making it easier to carry out combing operations and raids.

IDEX 2018 also showcased drones made by the Egyptian army’s Arab Organization for Industrialization, in an attempt to enter the world market for the manufacture of drones, where Turkey occupies an important position.

In December 2018, the Egyptian naval forces announced the first Egyptian naval weapon, the Egyptian Gowind corvette. The Egyptian army stated back then that it aims to strengthen capabilities in achieving maritime security, border protection and economic interests in the Red Sea and Mediterranean.

On Dec. 19, 2019, the Egyptian army released a video of a number of weapons manufactured in the factories affiliated with the Ministry of Defense and Military Production, such as Temsah-3 and vehicles ST-100/ST-500, the armored vehicle Fahd-300 and the modified Egyptian 13 mm gun M-46.

Meanwhile, Egypt plans to hold IDEX 2020 in December. The Ministry of Defense and Military Production announced that new Egyptian weapons will be showcased at this exhibition, and also revealed a plan to produce the M1A1 Abrams tank.

The Egyptian government’s plan to develop the arms industry includes exporting Egyptian weapons to African countries in order to further extend Egyptian influence in the continent. In this context, an exhibition of arms and military products was organized in the presence of Egyptian military industries companies in December 2019 with the participation of defense ministers, chiefs of staff and military experts of African countries.

On Feb. 19, Assar announced a cooperation agreement with the Senegalese minister of armed forces, Sidiki Kaba, during his visit to Cairo for the supply to Senegal of military equipment, weapons and ammunition.

Yahya al-Kadwani, member of the Defense and National Security Commission in the Egyptian parliament, said, "The state is seeking to achieve self-sufficiency in the field of weapons since it has to import large amounts of weapons to build an army capable of addressing terrorism risks.”

He noted, “The African market is ready to benefit from Egyptian weapons, as Cairo is interested in being present in Africa politically and through military cooperation. African states need Egyptian weapons because of their good quality and low price and because they suit the nature of African people and Africa’s geography.”

He added, “The parliamentary Defense and National Security Commission is coordinating with the Ministry of Defense and Military Production to draft plans that can hone the skills of the Egyptian army and boost local production of weapons.”

Former Assistant Interior Minister Maj. Gen. Mohamed Nour al-Din told Al-Monitor, “Egypt is in dire need of a plan to manufacture weapons locally, in light of the state policy to develop the capacities of the Egyptian army and supply it with weapons and equipment.”

He said, “The weapons manufactured in Egypt are in line with the needs of the police and army in their operations. The Egyptian armored vehicles suit the desert geography of the areas of operations in the Sinai Peninsula and meet the requirements of the security forces that might not be available in imported weapons.”

Nour al-Din added, “Developing the manufacture of weapons in Egypt will add a source of national income through exports to neighboring countries, be they Arab or African.”

He noted, “The plan to manufacture weapons will benefit African countries facing weapons shortages due to the high prices of weapons imported from the West. Egyptian arms will meet their needs and cater to their circumstances, given the African challenges to confront terrorist and extremist groups.”

He said that “funding was [in the past] the main obstacle facing the Egyptian plan to produce weapons. But today the country has a clear political will to direct the required funding to the army and to the production of weapons, especially in light of the internal and external terrorism threat and the neighboring [crises].”

Nour al-Din concluded, “The biggest accomplishment in the plan to develop Egyptian arms was the opening of the Military Factory 300 to produce ammunition. When we trained [armed] forces, we suffered from a lack of ammunition, which limited the scope of training. But local ammunition production will secure large quantities of products and boost the training of forces with the needed ammunition.”