The Egyptian army and security forces have been under attack this Ramadan, as in previous years. 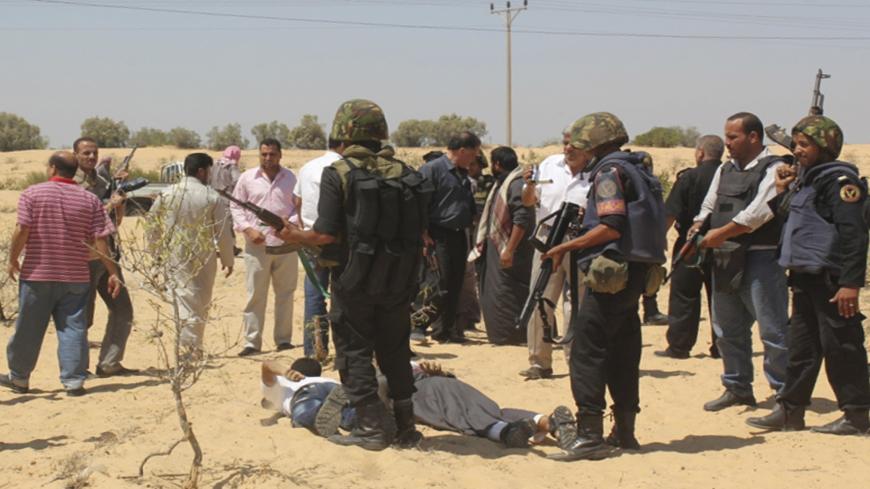 CAIRO — Attacks against the Egyptian army in the restive northern Sinai Peninsula often occur during the Muslim holy month of Ramadan.

Egyptian army spokesman Col. Tamer al-Rifai said in a statement April 30 that an improvised explosive device (IED) targeted a military vehicle near the city of Bir al-Abd in northern Sinai, killing and wounding 10 soldiers, including one officer and one noncommissioned officer. Rifai noted that the Egyptian army’s operation against terrorist members in Sinai is ongoing, so as to preserve the country’s security and stability.

The following day, on May 1, the Islamic State claimed responsibility for the attack. Rifai announced on the same day that the Egyptian army carried out a military raid on a small farm in northern Sinai, which resulted in the killing of two highly dangerous terrorists. The army found during the raid multiple weapons, a radio device and ammunition.

Khaled Okasha, head of the Egyptian Center for Strategic Studies, told Al-Monitor over the phone that terrorist elements in Sinai have always chosen the month of Ramadan — more precisely the fasting time — to conduct terrorist attacks.

Okasha explained that the terrorists attack when the soldiers and officers are fasting or are breaking the fast (iftar), since their alertness would be relatively low.

He listed two attacks that took place during Ramadan: the August 2012 attack that killed 16 Egyptian soldiers and officers in Sinai near the border with Israel, and a similar attack on Aug. 19, 2013, that killed 25 recruits.

Okasha added that Ramadan 10 (Oct. 6, 1973) is a symbol of the victory over Israel in the 1973 Arab-Israeli war, which the terrorist groups seek to erase from the Egyptian mind. Yet, he said, they will not succeed in turning this victory day into defeat, in the face of the Egyptian people’s steadfastness and determination.

He noted that the army’s response to the latest attack was swift, after the Egyptian Ministry of Interior announced in the early hours of May 3 the killing of 18 terrorists in the vicinity of Bir al-Abd during a shootout.

The Interior Ministry said in a statement that the raid on the terrorists’ outpost was conducted after the ministry’s National Security Agency obtained information that a group of terrorists are using a house in Bir al-Abd as a hideout to carry out terrorist and hostile attacks. It added that clashes and a shootout erupted with this group of terrorists who had in their possession 13 automatic firearms and three IEDs.

Okasha further noted that the Egyptian army issued a statement May 3 stressing that its battle against terrorism in Sinai is ongoing, and that 126 terrorists have been killed recently — without specifying when exactly — in 22 raids they carried out against terrorists’ hideouts and in 16 military operations.

The statement added that the Egyptian air force destroyed 228 terrorist hideouts, 116 four-wheel drive vehicles, 630 explosive devices and other weapons and ammunition. The air force also arrested 266 terrorists and criminals, and four officers, three noncommissioned officers and eight soldiers were killed in the operations against the terrorists’ outposts, the statement continued, without providing a timeline of said figures.

Maj. Gen. Mohamed Nour al-Din, former adviser to the Ministry of Interior, agreed with Okasha, saying that terrorist members deliberately carried out operations during Ramadan while soldiers are fasting. Yet conducting attacks against Muslims who are fasting refutes the attackers' weak claim that they follow true Islam, and prove they are mere terrorist groups that only seek to destabilize the country’s security and stability, Nour al-Din told Al-Monitor.

He pointed to the killing of 29 members of the Egyptian army in a car bomb attack on Oct. 24, 2014, at a security checkpoint in Karam al-Qawadis in the northern Sinai city of Sheikh Zuweid, and said it was during Ramadan when 21 members of the border guards were killed in Farafra on July 19, 2014.

Nour al-Din said the Egyptian army launched an offensive dubbed "Comprehensive Operation - Sinai," on Feb. 9, 2018, to eliminate terrorist groups in northern Sinai. The announcement back then came after a terrorist attack targeted al-Rawda Mosque in northern Sinai on Nov. 26, 2017, killing 305 people and wounding 128. Nour al-Din believes the operation has indeed succeeded in eliminating a large number of terrorists, and airstrikes on their positions destroyed large quantities of weapons.

Mustafa Sangar, a Sinai-based journalist, said that security is lacking in northern Sinai, which explains the recurrent terrorist attacks. He told Al-Monitor over the phone that the terrorists attack the army and police during the month of Ramadan, when the security is low. But since attacks are recurring during this time of fasting, the army should step up security measures, he concluded.