Is Islamic State making a comeback in Sinai?

A researcher says repeated attacks by Islamic militants in Sinai show that Egyptian forces must be ever vigilant. 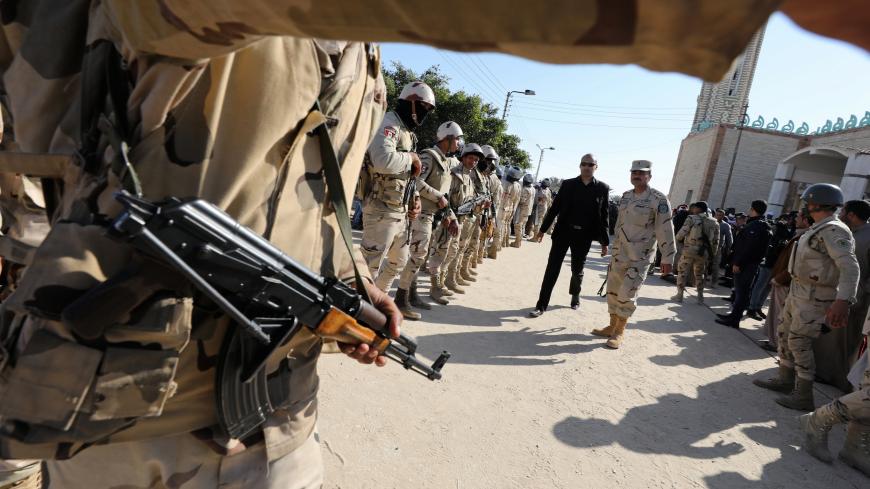 CAIRO — On May 31, the Egyptian armed forces announced in a statement that 19 militants had been killed during military strikes carried out during the previous week in Sinai.

The same statement said the strikes were based on intelligence information that confirmed the presence of extremists in several locations in the vicinity of the cities of Bir al-Abd, Sheikh Zuweid and Rafah in North Sinai. Two military strikes were carried out, the first of which resulted in the killing of three suspects found with automatic weapons, ammunition, grenades and RPG ammunition in their possession. Military engineering teams also discovered and destroyed five explosive devices that had been planted to target the Egyptian armed forces, officials said.

The army reported five deaths among its ranks; two officers, one noncommissioned officer and two soldiers. The Associated Press reported this occurred when an explosive device hit their vehicle.

During the operation, the Egyptian air force carried out a number of airstrikes to target "terrorist hideouts," which resulted in the death of 16 suspects, bringing the total to 19, according to the army’s statement.

On April 30, an explosive device targeted a military vehicle near the city of Bir al-Abd, killing 10 soldiers, including an officer and a noncommissioned officer. On May 1, the Islamic State (IS) claimed responsibility for this attack.

Samir Ghattas, a security and strategic expert and head of the Middle East Forum for Strategic Studies and National Security, told Al-Monitor over the phone that Egyptian army forces have long been working to contain terrorism in Sinai, dry up its sources and confront it militarily, developmentally and intellectually.

He said the Egyptian state believes that security confrontation is inevitable with extremist groups that use their weapons to terrorize citizens, and the army and the police in particular.

Ghattas added, “The Egyptian armed forces launched Comprehensive Operation Sinai on Feb. 9, 2018, with the aim of confronting terrorism in Sinai, nipping it in the bud and eliminating the tunnels used by terrorist groups to smuggle weapons and commit illegal acts. This proves that the state has always been serious about fighting terrorism, but the problem is that the confrontation results in casualties among the army and the police, and it requires patience, great determination and a long time until the terrorists are completely and permanently eliminated.”

He said security strikes have largely been successful in curbing extremists' operations in North Sinai. He said that while militants' attacks have not disappeared completely, a decrease in their frequency and size means that the security forces have succeeded in reducing and controlling them.

Ghattas said militants were carrying out assassinations and bombings targeting civilians — as happened in the terrorist attack that targeted Al-Rawda Mosque in between Bir al-Abd and el-Arish in November 2017 that resulted in the death of 305 people — but that currently, extremists are being directly targeted by the military.

Ghattas said the state is working on implementing several projects aimed at developing and reconstructing Sinai and strengthening its connection with the rest of Egypt, because marginalization and poverty is what leads to the presence of terrorists.

He said the state has implemented several development projects and plans, most notably the expansion of agricultural areas in Sinai and a water desalination plant, in addition to projects by the Ministry of Water Resources and Irrigation in various parts of Sinai.

Meanwhile, Ali al-Rajjal, a researcher with Mominoun Without Borders who specializes in security affairs, told Al-Monitor that the repeated terrorist attacks in Sinai, and specifically in North Sinai, reveal a major security imbalance in this area. The security forces must be more vigilant and prudent when it comes to fighting off these armed men who rely on deception and ambush in carrying out their operations, he said.

He said a significant amount of data must be collected by tracking and analyzing suspects' movements, plans and how and when they carry out their operations in order to thwart militants before they target the army and police.

Rajjal said the recent operation that killed 19 suspects and destroyed a number of weapons and ammunition is a perfect example of how to preemptively shut down suicide and other terrorist attacks. He called on the security forces to intensify such moves to eliminate extremists in North Sinai.

“We hope to launch many similar operations against terrorist strongholds in the next stage, although this could result in losses among the security forces, but it is very important in light of the repeated attacks targeting the army and police over the past years,” he added.

Rajjal said he believes that some extremist attacks and confrontations may continue for a while, as the anniversary of the June 30 Revolution approaches and it could be an important opportunity for terrorist groups who want to take revenge on the state, which excluded the Islamists from power following the June 30 demonstrations in 2013,. He said the groups may seek to also take revenge on the people who supported the demonstrations.