Are Sinai-based terrorists shifting to Cairo?

Egyptian authorities' pursuit of Sinai-based terrorists may be expanding to cells near the capital. 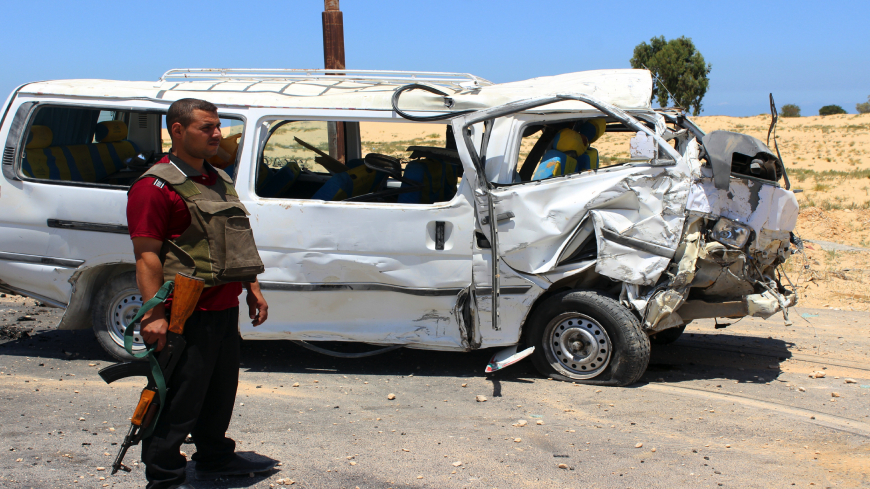 A member of the Egyptian security forces stands guard next to a damaged bus following a roadside bomb blast that wounded 20 Egyptian policemen on the outskirts of the northern Sinai Peninsula's provincial capital of El-Arish on July 9, 2015. The military is fighting an Islamist insurgency in the northern Sinai Peninsula, which grew since the 2013 ouster of President Mohammed Morsi by then army chief and now President Abdel Fattah al-Sisi. - STR/AFP via Getty Images

CAIRO — Egyptian authorities continue to crack down on terrorist elements in the Sinai Peninsula, but more recently these operations seem to have moved out of Sinai and closer to the capital city of Cairo.

On Sept. 28, Egypt’s security forces killed two suspected militants in Qalyubia governorate, in the Greater Cairo area. The Egyptian Ministry of Interior said in a statement that a shootout erupted when police raided a hideout in al-Qalg used by suspects planning terrorist attacks. The statement said Hossam Abd Rabbo, 47, and Ahmed al-Sayyid al-Biyoumi Ibrahim, 37, were killed and found in possession of a machine gun, a pistol and various types of ammunition of different calibers.

According to the statement, the suspects belonged to an extremist and terrorist cell that had been targeted in April before carrying out a terrorist attack ahead of the Coptic holidays.

The ministry had said April 14 that Muhammad al-Hofi, a counterterrorism officer at the ministry, was killed during clashes with terrorists in Cairo's Amiriyah district. Seven terrorist operatives were also killed.

The Egyptian armed forces announced Aug. 30 that seven officers and soldiers were killed and wounded during raids conducted at terrorist groups’ hideouts in the northern Sinai Peninsula, which indicates that the confrontation has moved to the capital and nearby governorates, according to observers.

Ali Raggal, an expert on security affairs at Mominoun Without Borders, a Moroccan-based research institution that encourages religious reform in Arab and Muslim societies, believes that it is certainly a good thing that the police pursue terrorist operatives and take preemptive actions. But he sees that these elements are moving closer to the capital and nearby governorates and shifting their terrorist activities from Sinai to the capital and its suburbs, which points at a security defect in the police strategy when dealing with them.

Raggal told Al-Monitor via phone that the raids and killings of some gunmen by the police are what provokes the terrorist groups, prompting them to resort to violence, seek revenge, and expand their activities toward the capital and its suburbs.

He said the targeting of gunmen and outlaws is successful, but the killing of these elements without trials is what increases confrontations with the police and subsequent losses incurred by the two sides. It is always better to deal with them in a professional way; namely, to arrest them, bring them to justice and not kill them on the spot, he stated.

Speaking to Al-Monitor on condition of anonymity by phone, a security source explained that the police and armed forces are decisive in countering terrorists in the various parts of Egypt. The source said security forces have successfully targeted a number of terrorist strongholds in the past, most notably when the armed forces destroyed 317 hideouts and warehouses holding explosive devices in the northern Sinai Peninsula and 19 four-wheel-drive vehicles used by terrorists, killing 73 terrorists July 22 and Aug. 30.

The source indicated that the northern Sinai Peninsula is the main terrorist hotspot — not Cairo or other governorates save the very rare attacks against the Copts, armed forces and police. He said these elements have been almost completely eliminated so far, thanks to the preemptive strikes that counterterrorism forces conduct.

He said the repeated preemptive strikes against terrorists, especially the raid at a hideout in Cairo's Amiriyah district in April, confirm that police have succeeded in eliminating those elements before they are able to carry out terrorist operations or target Copts or Christian places of worship.

The source said the last security operation on Sept. 28 is linked to April’s operation, as all suspects belong to the same terrorist cell. He said the operation aimed to fully eliminate this cell and avenge the killing of Hofi.

The limited and failed terrorist operations in Sinai recently point to the success of the military's preemptive strikes in the northern Sinai Peninsula and other areas in Egypt, and it has thus become clear that terrorist activities have decreased across Egypt recently compared to previous years, according to the source.

In February 2018, the Egyptian armed forces launched Comprehensive Operation Sinai 2018 in Sinai, the Nile Delta, and desert areas west of the Nile Valley in a bid to eliminate armed and terrorist groups.

Samir Ghattas, a member of the Egyptian parliament and head of the Middle East Forum for Strategic Studies, told Al-Monitor via phone that Egyptian security forces have successfully led the battles against terrorism through preemptive strikes to eradicate terrorist elements before they are able to conduct armed operations.

Ghattas said cooperation between police forces and the army has significantly curbed terrorist operations — which shows their success in thwarting terrorist groups' plans by weakening their manpower and logistic strength — and has subsequently created despair and frustration within terrorist ranks.

He noted that the significant and noticeable decline in terrorists' and armed groups’ capabilities since 2018 is due to the police’s preemptive blows and security raids carried out occasionally, which resulted in the recent decline in the terrorist groups' activity.