Following the months-long calm, the Egyptian army said that eight soldiers have been killed and wounded in recent military operations in north Sinai, and 89 militants killed. 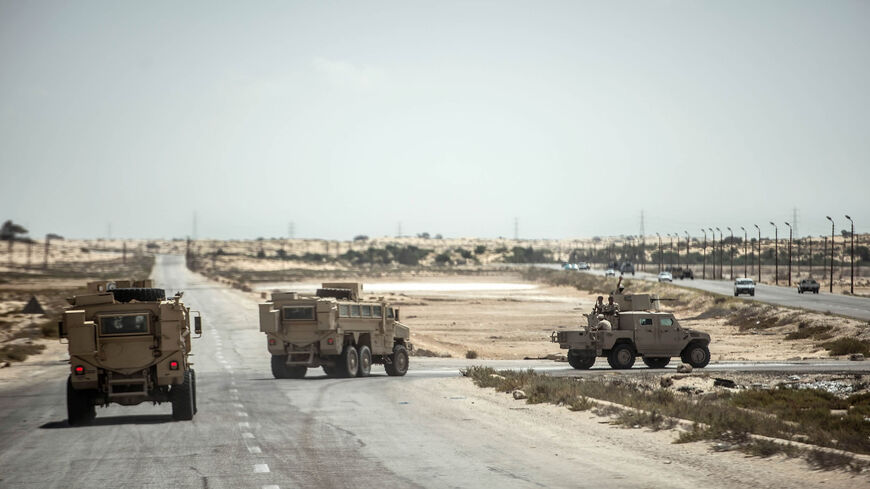 CAIRO — The Egyptian army has recently revealed that eight Egyptian soldiers have been killed and wounded in recent anti-terrorism operations in the Sinai Peninsula.

Egyptian military spokesman Col. Gharib Abdel Hafez said in a statement posted on his official Facebook page Aug. 1 that the military operations resulted in the killing of 89 militants in north Sinai, while dozens of automatic firearms, ammunition and electronic devices were confiscated.

He continued that the army also destroyed dozens of vehicles and motorcycles, which were used for terrorism purposes against army and police stations in Sinai, in addition to destroying tunnel entrances used to cross into north Sinai.

Meanwhile, officials said that Islamic State (IS) militants ambushed a checkpoint in the northern Sinai town of Sheikh Zuweid July 31, killing at least five security members, and wounding six others.

Tension between the Egyptian army and extremist militants had decreased in north Sinai in the past months, with the latest operation led by the army announced on Dec. 8, 2020. Back then, Abdel Hafez had posted a video of the operation, saying that 40 militants were killed; dozens of cars, motorcycles and terrorist hideouts destroyed; weapons and ammunition seized; and explosive devices dismantled. Six soldiers have been killed in the operation, he added.

Speaking to Al-Monitor on condition of anonymity, an Egyptian journalist specialized in Sinai affairs and based there said, “Although major attacks targeting the army and police in Sinai have been rare in the past months, members of the IS-affiliated Wilayat Sinai are still present in Sinai, launching sporadic attacks.”

He noted, “The situation in Sinai is much better compared with the previous years, thanks to the armed forces’ direct strikes targeting terrorists and their hideouts.”

The source added, “Terrorists are currently robbing civilians and stealing their animals — including birds, sheep and goats — because [the militants] have been lacking funds in the past.”

Analysts who spoke to Al-Monitor believe that dormant militants are seeking to prove their presence by carrying out sporadic terrorist attacks, following the strong and successful blows dealt by the Egyptian army against armed groups in Sinai.

Maj. Gen. Mohamed al-Ghobari, former director of the National Defense College, told Al-Monitor by phone, “The Egyptian army was able to counter international terrorism that was planted in Sinai. It succeeded in eliminating its roots, represented by the first and second rank leaders of terrorist groups. Yet some recruited members ran away, and have become dormant members. They carry out sporadic operations to prove that they still exist.”

He said, “The Egyptian army’s response to the armed attacks is fast and strong. Elements carrying out terrorist operations are pursued so as to be eliminated and to have their dens destroyed.”

Ghobari noted, “The attacks currently launched in Sinai — similarly to the terrorist operations that take place in several European countries, including stabbings or car ramming operations — consist of latent terrorism.”

He added, “The sporadic operations that gunmen carry out in Sinai will not affect development, economic and urban plans and projects that are being implemented in the governorate.”

Maj. Gen. Samir Farag, a military expert, told Al-Monitor, “Terrorism in north Sinai has decreased because of the Egyptian army’s recent operations. Terrorist groups are seeking to join forces once again, to recruit new members and compensate for the ammunition warehouses that the army destroyed.”

He said, “The armed groups are currently carrying out sporadic attacks, to prove to their funders that they are still present and operating on the ground.”

Farag added, “The Egyptian army is taking quick action in countering the armed groups, with the aim of securing the state’s strategic [interests] and protecting the Egyptian national security.”

Commenting on the impact of these occasional attacks on the Egyptian government’s economic recovery plans, Farag noted, “Sporadic terrorist attacks will neither affect the development process, nor the economic situation, investment climate or plans to boost tourism in Sinai. That's because the state is in control of the situation in Sinai.”

It seems these sporadic operations come in retaliation to the state’s achievements, especially the economic recovery, he said, stressing the army’s ability to counter terrorist elements and eliminate them so as to make the government’s development plans a success.

In the past, members of Wilayat Sinai conducted attacks against the army and police forces, as well as civilians in Sinai.

In February 2018, the Egyptian army announced Comprehensive Operation-Sinai 2018 under the directives of President Abdel Fattah al-Sisi, aiming to end terrorism in north Sinai and some parts of the Delta region.

The Egyptian government seeks to implement development plans and projects in the Sinai Peninsula, including the establishment of urban communities, state universities, roads and tunnels connecting Sinai to the Nile Valley and the Delta region, in addition to building water treatment plants, with the overall aim to improve the citizens’ income by creating new jobs.

Youm 7 reported June 11 that the development plan for 2021-22, which the Cabinet submitted to parliament, involved government investments for the development of the north Sinai governorate, amounting to nearly 14.1 billion Egyptian pounds ($900 million) during 2021-22.