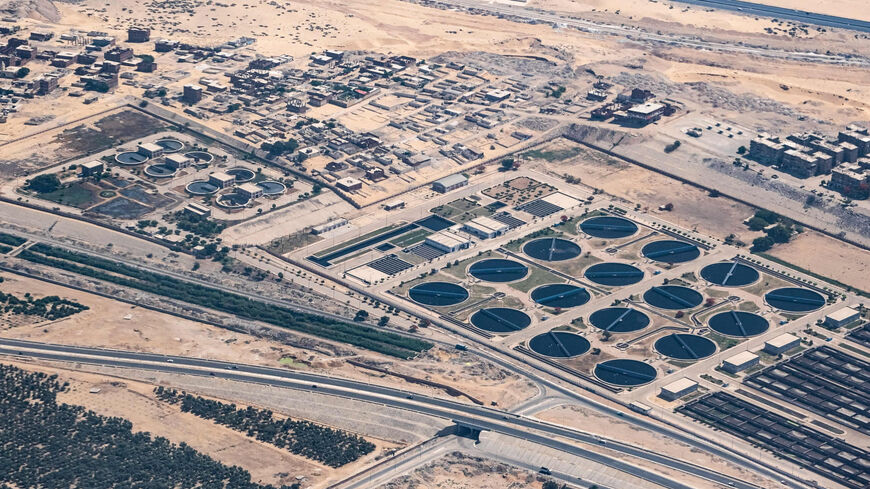 This picture shows an aerial view of the Ard al-Berak water treatment plant on the northeastern outskirts of Cairo, Egypt, May 28, 2021. - Amir Makar/AFP via Getty Images

With a daily production capacity of 5.6 million cubic meters, the plant was registered in the Guinness Book of Records as the world's largest agricultural wastewater treatment plant. It took two years to build the plant at a cost of 18 billion Egyptian pounds ($1.14 billion).

The plant includes seven bridges and six siphons, in addition to lift stations to transport water from the west to the east banks of the Bahr el-Baqar drain underneath the Suez Canal.

The plant will treat the water collected from the Bahr el-Baqar drain, to be distributed to northern Sinai.

Speaking at the inauguration ceremony, Sisi said, “We can now tell the people in Sinai that the water supply is available for old agricultural lands and for the new ones that we seek to cultivate,” in reference to lands that the state is seeking to reclaim.

The Bahr el-Baqar drain stretches over a distance of 190 kilometers (118 miles), from south of Cairo to Port Said, passing through the governorates of Ismailia, Sharqia, Dakahlia and Qalyubia, and discharges in Lake Manzala and the Mediterranean Sea.

Sisi said the project included changing the course of the water drain that discharged into the Mediterranean Sea, to collect it and treat it before transferring it to Sinai. There, he continued, the water will be used to cultivate lands reclaimed as part of a national project to develop the Peninsula.

The Egyptian government is planning to reclaim about 476,000 feddans (roughly 500,000 acres) in several parts of central Sinai, including in Bir al-Abd, as-Ser and al-Qawarir, in order to establish planned communities.

A source close to security and government circles in Sinai told Al-Monitor that the agricultural sector in the area has been badly affected by the security operations that have been ongoing since 2013 in northern Sinai.

He pointed out that agricultural lands that the people worked on for decades using rainwater or underground wells also shrank.

The source said the Bahr el-Baqar project reflects the government’s will to play a major role in the development of the Peninsula, even without the participation of the residents.

Abbas Sharaki, professor of geology and water resources at Cairo University, told Al-Monitor that the Bahr el-Baqar plant is a major turning point in the development plan for Sinai. He believes supplying Sinai with the Nile waters does not only contribute to improving agriculture, but will also encourage creating new urban communities there.

In 2018, the Egyptian government announced a plan to develop Sinai with the support of the Egyptian army, coinciding with the security operations there. Sinai was marginalized for decades after its liberation from the Israeli army in 1973 and its complete return to Egypt following the Camp David Accords signed between Cairo and Tel Aviv in 1979.

The Egyptian government has spent more than 650 billion Egyptian pounds (about $41.4 billion) on development projects in Sinai since 2014. It also allocated 275 billion pounds ($17.5 billion) in investments in the region, including 175 billion pounds ($11.1 billion) from Arab institutions and funds, between 2018-19 and 2021-22, according to official data by the Ministry of Planning, Monitoring and Administrative Reform.

Alia el-Mahdi, former dean of the faculty of economics and political sciences at Cairo University, told Al-Monitor that the government’s plan to reclaim and cultivate lands in Sinai is a positive step, but land reclamation must be entrusted to major companies.

However, it seems the government is still facing difficulties in attracting investments to Sinai, according to what Sisi said during the inaugural speech. “We hope that the private sector and investors join the work in those lands … cultivate, benefit and keep [the area] alive,” he noted. “We will provide all the required services."

Sharaki said the state should not deal with the Sinai development projects based on the traditional economic criteria, i.e., the gains and losses these projects would register. This is because, according to him, they are strategic projects that contribute to rebuilding and repopulating Sinai.

The peninsula covers a surface area of 61,000 square kilometer (23,500 square miles) — 6% of Egypt’s surface area — but only 1.5 million people — 1.5% of Egypt’s population — reside there. Sharaki believes this figure should increase to 6 million.

On Sept. 29, the government issued calls for tenders for 17 development communities in Sinai, with the aim of settling a number of families in Sinai.

But the presence of armed groups continues to pose a threat to development plans in Sinai. In this context, Sisi instructed in September the minister of defense to protect the workers working on these development projects.

In the early 2000s, extremist groups emerged mainly in the northern and central part of Sinai, starting with al-Qaeda and more recently the Islamic State. The armed groups’ activities have significantly declined since the launch of Comprehensive Operation-Sinai 2018 and the formation of special forces tasked with combating terrorism in Sinai and securing development projects there.

In a report on anti-terrorism operations in Sinai released in August, the Egyptian government said it has succeeded in tightening control over Sinai, as terrorist operations have declined compared to previous years, while the people’s living conditions have been stable. The government said that the military and security forces continue to pursue the remnants of terrorist groups.

Commenting on the developments at the security level, the Sinai-based source said that the areas of Sheikh Zuweid and Rafah are almost devoid of armed groups. But, he added, active pockets remain in Bir al-Abd, which may threaten development projects as well as the residents.

Meanwhile, on Sept. 27, Sisi inaugurated four seawater desalination plants in the cities of Abu Zenima, Dahab, Nuweiba and Ras Sedr, with a total production capacity of 53 cubic meters per day.

These projects reflect the government’s plan to face the water challenges in Egypt mainly posed by the Grand Ethiopian Renaissance Dam (GERD), according to Sharaki.

Egyptian TV talk show host Amr Adib, who is close to the government, said during his show on MBC Masr Sept. 27 that the launching of these projects comes in response to the Ethiopian allegations about Egypt wasting its water resources over the past 10 years. He explained that the canal lining projects and the building of water treatment and desalination plants confirm that Egypt is keen on preserving every drop of water.

Mahdi, meanwhile, believes that the government’s development plan in Sinai is the first step on a long road to build a productive society and villages in Sinai.