The governor of northern Sinai has allocated 2,500 acres of land to university graduates, which would provide them with employment opportunities at a time when the province is witnessing a boom in various development projects. 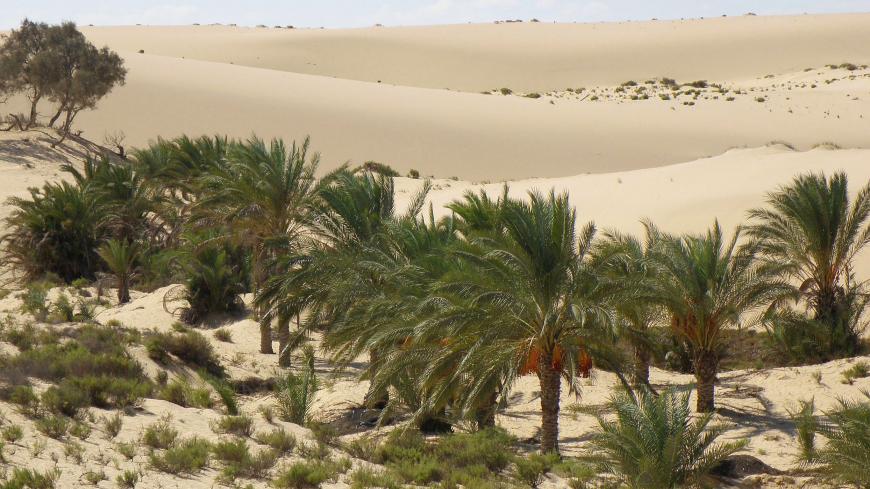 CAIRO — In an attempt to empower university graduates in the northern Sinai governorate, Gov. Abdul Fadel Shosha announced July 3 that the deadline for graduates' applications for the draw of agricultural land in Bir al-Abd has been extended until Aug. 7.

The draw, which was announced March 21, is part of a project to develop the Sinai Peninsula, particularly the town of Bir al-Abd, west of el-Arish. The winners will each receive a usufruct to 5 acres of land — of the 2,500 acres made available — with the option of paying the purchase price in installments over 20 years.

The Egyptian government is intensifying efforts to establish various service projects for northern Sinai residents in order to achieve sustainable development in line with Egypt Vision 2030.

Atef Matar, engineer and undersecretary of the Ministry of Agriculture and Land Reclamation in northern Sinai, told Al-Monitor, “[The governor] in northern Sinai decided to distribute 2,500 acres of land in el-Salam Canal in Bir al-Abd municipality in a public draw for the graduates and permanent residents of the governorate. Each winning applicant gets 5 acres of land. The applicant must be Egyptian, born to Egyptian parents and a graduate of an Egyptian university and unemployed. Agriculture and veterinary students are given priority.”

Matar said, “An acre costs 25,000 Egyptian pounds [$1,500] with no basic internal infrastructure and 25% of the price of the acre must be paid in advance. The remaining amount is paid in monthly installments over 20 years. As soon as the full amount is settled, ownership of the land is transferred.”

He added, “These lands are only for agricultural use and the authorities choose agricultural crops that should be planted according to the needs of the governorate. The governorate will also provide residential units in Bir al-Abd to the winners of the draw.”

Stressing the importance of the projects in rebuilding northern Sinai, Matar noted, “Graduates are directly benefiting by receiving land, cultivating the land and selling the crops, in addition to receiving residential units in the governorate. Non-graduates also benefit indirectly because they are hired to work on the land or transport the crops. As a result the main aim of the agricultural land project — which is empowering the young people and encouraging them to stay and develop their land — is fulfilled.”

He added that these allocated lands are kept under constant supervision, with the Ministry of Agriculture and Land Reclamation forming an inspection committee to ensure that those allotted land plots are cultivating the land and complying with set standards.

Northern Sinai has been witnessing unprecedented development projects since the beginning of 2019 to attract investments, provide job opportunities for the youth and empower citizens. A wholesale market in el-Arish to meet the governorate’s vegetable and fruit needs is currently under construction. On Feb. 20, investment in an industrial zone in Bir al-Abd was proposed and 60% of this project has been completed. This is in addition to the new cities that were built to provide housing for the governorate’s residents. On March 28, President Abdel Fattah al-Sisi announced building New Bir al-Abd City.

Mohammad Radwan, director of the housing directorate in northern Sinai, told Al-Monitor about the different projects the Egyptian government is working on to develop Sinai. He said, “The first phase involves building residential cities — such as New Rafah City — to accommodate those who suffered the woes of the war on terrorism. This city is located about 7 kilometers [4,5 miles] from [Sheikh Zuweid] and includes 626 buildings with 10,000 residential units, each with a surface area of 120 square meters [1,300 square feet] and 400 country houses.”

In regard to the second phase of the government’s Sinai development project, Radwan said, “It includes establishing projects that open a wider door for investments such as the wholesale market in el-Arish, 60% of which has been completed and will be opened at the end of 2019. The project has cost 167 million pounds [$10 million].”

He added, “The industrial zone in Bir al-Abd stretches over 240 acres, including 150 acres for industrial activities, 70 acres for roads, 13.5 acres for services and 6.5 acres for green spaces. The artisanal complex in el-Arish — which will include 28 equipped workshops for different specializations such as carpentry and furniture — is also underway, at a cost of 50 million pounds [$3 million]; 30% of this project has been completed.”

Although the plan to develop northern Sinai entails developing all its centers, the city of el-Arish is benefitting from large-scale projects as it is the capital of the governorate, according to Radwan.

The third phase of the project consists of empowering the young people by allocating agricultural lands to them, through projects similar to the recent allocation of 2,500 acres announced by the north Sinai governorate.

Radwan believes that the ongoing development projects prove the success of the Egyptian government's plan for the development of Sinai. “In the past we faced difficulty to get raw materials and we suffered from a lack of labor, which slowed down or halted some projects. Now the projects are executed despite some security problems,” he said.

He added, “The government is serious about the development of Sinai, and the billions that the state is spending on Sinai cannot be squandered without efficient results. The youth are the main beneficiaries from these development plans; they will get the chance to have suitable housing and work in the agricultural or industrial sector.”

He noted, "The Ministry of Housing, Utilities and Urban Development is moving according to a strategic plan in northern Sinai by conducting studies to choose the best sites to implement the projects, as per Sinai citizens’ needs."

Khaled al-Shafei, economist and director of the Capital Center for Economic Studies and Research (CCESR), told Al-Monitor, “Sinai was largely marginalized during the past four decades, but the government is moving toward a comprehensive development plan in Sinai, and the situation is improving. Allocating land for the youth in Sinai or establishing an industrial zone aims at achieving real development and eradicating terrorism.”