Egypt’s President Abdel Fattah al-Sisi issued a decision to transfer control of el-Arish port in northern Sinai to the armed forces, a move critics say tightens the army’s grip on the country’s institutions. 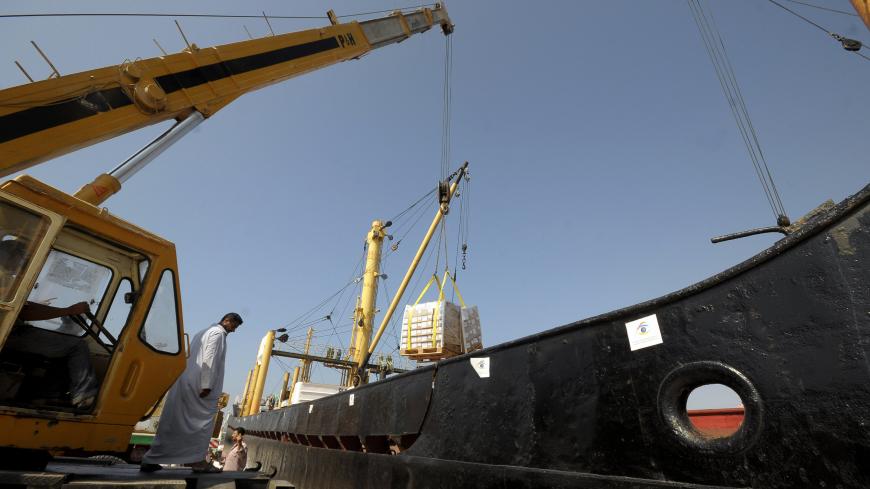 Egyptian President Abdel Fattah al-Sisi issued a decree July 16 to transfer control over the Port of el-Arish and its surrounding buildings, facilities and land in the northern Sinai Peninsula to the armed forces.

Political analysts and economists said the move is mainly aimed at tightening security measures in this area, which has been witnessing terrorist attacks for years, as well as for carrying out developmental projects to serve the area’s residents.

According to Article 1 of the decree, “The Port of el-Arish in northern Sinai governorate, all its buildings, facilities and any other surrounding land plots shall be deemed to be of public utility, except for military sites that are exploited in defense of the state.”

The second article stipulates the transfer of authority over the el-Arish port and reallocation of all the land surrounding it to the armed forces for developmental work. The total area is approximately 156 square kilometers (60 square miles).

The decree also stipulates that the General Authority for the Suez Canal Economic Zone shall finance and implement the development, management and operation of the Port of el-Arish. The Ministry of Defense shall assume the duties of securing the port area, according to the decree.

Previously, the port had been under the supervision of the northern Sinai governorate. Sisi has the authority to transfer control of the port as president and commander of the armed forces.

Activist and Sinai resident Eid al-Marzouki wrote on his Facebook page that the decision comes as part of a systematic policy to completely evacuate northern Sinai. He explained that the area surrounding el-Arish port is residential and that the port itself is dilapidated and is not of great use.

Other activists attributed the decision to other factors. Haytham Abo Khalil, a human rights activist, wrote on his Twitter account, “It is a systematic policy to vacate Sinai! It is as if the area of Egypt, which exceeds 2 million square kilometers, is not enough land for the army! Coincides with Jared Kushner's deal,” referring to the Trump administration's deal to settle the Palestinian-Israeli conflict that has not yet been fully disclosed.

Political analysts, however, have ruled out the idea that the state is planning to evacuate the residents of Sinai because it would backfire.

“The state would never think of evacuating the Sinai residents because they may start to collaborate with the terrorists and perpetrate terrorist attacks,” Amr Hashim Rabee, head of Al-Ahram Center for Political and Strategic Studies, told Al-Monitor. “Even if we assume that the government would evacuate these residents, it would financially compensate them in order to avoid any backlash from them.”

The city of el-Arish, the capital of the governorate of northern Sinai, has been witnessing periods of armed attacks targeting elements of the army and police. On July 18, army forces foiled a terrorist attack by a suicide bomber near a parking lot and a security checkpoint in el-Arish. The army killed him before he reached his target. One soldier died also, according to an army statement.

On Aug. 28, 2018, the Egyptian government announced a massive budget of 275 billion Egyptian pounds ($16.5 billion) to carry out developmental projects in the Sinai Peninsula until 2022 as part of efforts aimed at fighting an Islamist insurgency in this unstable part of the country and improving residents' standard of living.

Ahmed el-Shami, an economist and professor of feasibility studies at Ain Shams University, said that pushing for development in the Sinai Peninsula will serve residents of the area in the first instance as well as gradually eliminate terrorism.

“The use of the Port of el-Arish can greatly contribute to boosting the Egyptian economy as it can be used to export products from Sinai to other countries in Africa, Europe and the Middle East,” Shami told Al-Monitor.

Shami also remarked that Sinai has an abundance of natural resources and raw materials, which makes it an attractive area for investors and for projects in various economic sectors. He referred in this regard to the great potentials of the marble and cement industries as well as quarries and the agriculture sector in Sinai. Tourism and industry are also areas for potential exploitation.

“When establishing factories in this area, Egypt can export a lot of diversified products to countries around the world, given the strategic location of Sinai,” Shami concluded, referring to the development of Sinai being in line with major developmental projects being carried out in the nearby Suez Canal zone.