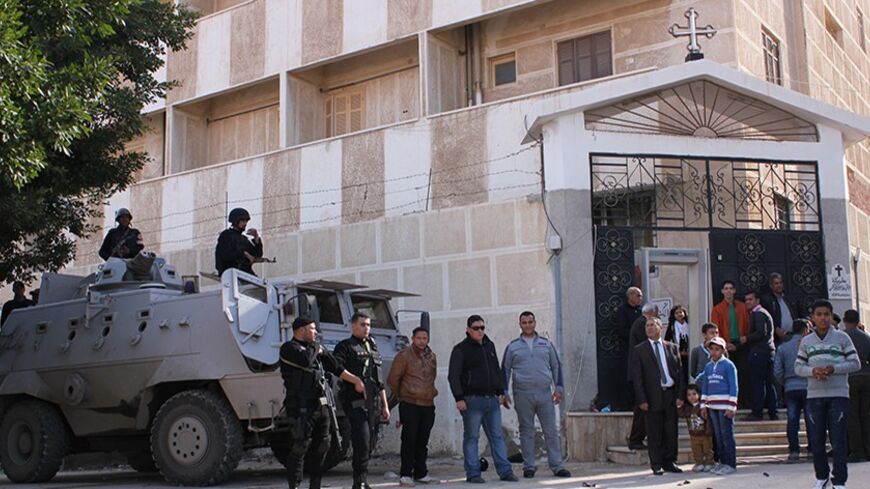 El-ARISH, North Sinai — Every road leading to North Sinai's only remaining church was blocked by an armored vehicle, a light tank or a Humvee surrounded by several military and special operations personnel. High-caliber machine guns were pointed in all directions, a police dog sniffed around, and the heavily armed, masked officers ushered everyone to go through the security gate set up some 100 yards from the church's entrance.

The level and sophistication of security measures taken for Egypt's most important Coptic celebration vividly reflected what the country's eastern frontier has been through, and how targeted the region's Coptic Christians continue to be.

Outside of the church, several security personnel pulled their guns to offensive position after a teenager set off some fireworks, while other officers secured the farther perimeter using binoculars from a balcony of an adjacent building.

El-Arish's only other church was torched in a militant attack several days after former President Mohammed Morsi's ouster on July 3, while Rafah's only church was destroyed in an attack during the January 2011 uprising.

The reception attended by no more than 250 people, including the Muslim attendees, was kicked off by Sheikh Amin Abdelwaged, the head of North Sinai's Sunni Muslim Religious Affairs Department.

"Congratulating our Coptic Christian brothers is a part of our religion that obliges us to extend peace to every member of our nation," Abdelwaged told the attendees.

"This nation will only survive by maintaining its national unity that is under attack by radical fanatics who do not reflect our real Islam," Abdelwaged added.

The following speeches by other community figures imposed Egypt's volatile politics over what was supposed to be a religious celebration. Condemning terrorism came only second to applauding the constitution and insisting that the upcoming constitutional referendum, scheduled to take place on Jan. 14-15, would be key for Egypt's future.

"We would like North Sinai's governorate to supply us with T-shirts emblazoned with 'Yes to the Constitution' so that all our children across the province take part in promoting this fight for Egypt's future," a female attendee, who refused to have her name mentioned, told the governor.

But nothing was as astounding as the bishop's words ending the reception.

"Participation in national events is a religious duty and accordingly we are all obliged to take part in the upcoming referendum," Kuzman said.

Several of the North Sinai's Coptic residents who attended the reception refused to speak to Al-Monitor or local media organizations.

"They are clearly afraid," a prominent activist from North Sinai told Al-Monitor on condition of anonymity. "And they have the right to be afraid; several Copts were targeted by militants in the past months."

"But the fact that the Coptic mass was held, even as brief as it was, is a clear message that the military and police and gaining more control of the situation," he added.

Driving overnight across the Suez Canal and into North Sinai's capital, El-Arish, Al-Monitor detected the heightened security measures taken ahead of Coptic Christmas. Checkpoints were reinforced with more machinery and personnel, roaming patrols monitored the main roads of El-Arish over the past few days, and top government and security officials were as keen as the province's patriarchy on holding the celebration.

"The fact that our fellow Coptic Christians were able to hold their religious rituals is considered a sign of success for whoever is against the militancy that has torn North Sinai since June 2013," said the activist. "It’s a success for both civilians and the security apparatus."

The activist added, "But this doesn’t mean that we are living in peace, or that the mission is done."

While Al-Monitor talked to North Sinai's Bedouin activist, three members of Egypt's Workers Union were abducted on their way to the southern tourist resort of Sharm el-Sheikh. All three were on their way to South Sinai to hold a conference about the constitution and the upcoming referendum. Their whereabouts remain unknown.

Gen. Ahmed Wasfi, the commander of Egypt's Second Infantry Army that has been leading the military operations in North Sinai since January 2011, visited North Sinai's patriarchy hours after the public reception ended.

The visit by Wasfi, who survived two assassination attempts in North Sinai since the beginning of Operation Sinai in July 2013, was surrounded by secrecy and took place at a time when the church is normally closed to civilians.