Amid snubs by Western arms suppliers, leaders in Ankara are eager to highlight progress in the Turkish defense industry during the military offensive on Afrin. 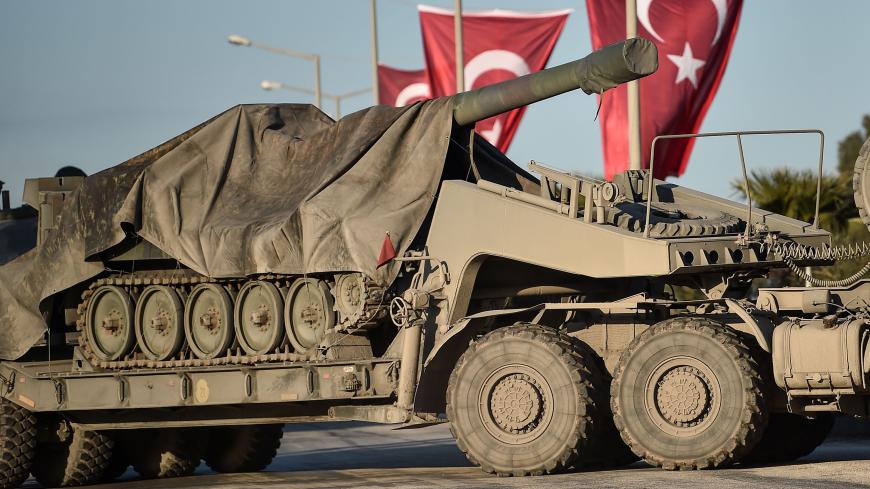 ANKARA, Turkey — On Jan. 21, a day after Turkey launched Operation Olive Branch against Afrin in northern Syria, Prime Minister Binali Yildirim briefed media representatives about the campaign, putting special emphasis on one issue. The operation, he said, was being carried out with weapons and ammunition that were up to 75% Turkish made.

As the operation proceeded, Defense Minister Nurettin Canikli made the same point in a series of tweets, stressing the notion of “native and national” that President Recep Tayyip Erdogan has come to repeat in various contexts. According to the minister, all ammunition used in the operation was Turkish produced, and the local share in Turkey’s defense industries has risen to 70% from 18% 15 years ago. He mentioned the smart HGK bombs, manufactured jointly by the Mechanical and Chemical Industry Company (MKEK) and the Military Electronics Industries (ASELSAN), multi-barrel rocket launchers made by the MKEK and the Firtina (Storm) howitzers produced in Turkish military plants. “Our ammunition stocks are so abundant that they will suffice to wipe out terrorism not only from Afrin but from the entire region, and we are continuing to produce,” Canikli wrote.

Erdogan’s son-in-law Selcuk Bayraktar, whose family business produces armed and unarmed drones for the Turkish military, was also eager to announce that his company’s drones were in action in the Afrin campaign. Bayraktar’s Twitter message was accompanied with a picture of him in front of screens in the army’s drone control room. Yet, another familiar face — the president’s son Bilal Erdogan — was seen in the picture, and his presence in the control room without any official duty did not go without criticism.

Drawing on this military industry showcase, Erdogan took the opportunity to hit back at main opposition leader Kemal Kilicdaroglu, who often criticizes the state of Turkey’s economy and industry. He even offered to give Kilicdaroglu a Firtina howitzer barrel as a gift.

Ankara’s emphasis on the use of Turkish-made weapons in the Afrin campaign is meant to send out a dual message: to highlight the progress in the Turkish defense industry and give a gleeful response to foreign critics who advocate the halt of arms sales to Turkey or oppose the use of weapons made in their countries in the Afrin offensive.

Turkey has previously failed to acquire armed and unarmed drones from the United States due to congressional objections. In September, the US Senate blocked the sale of Sig Sauer guns to Erdogan’s security guards after members of his security detail assaulted protesters during Erdogan's visit to Washington in May.

Israel, for its part, has refused to share technology and know-how in production and intelligence-sharing negotiations over its Heron drones.

Most recently, Germany suspended some arms sales to Turkey amid political tensions over the arrest of German nationals in the country and froze plans to upgrade the Turkish army’s German-made Leopard tanks.

Turkey and its Western arms suppliers have a long history of such wrangling, which has motivated Ankara’s drive for self-sufficiency and investment in the defense industry.

The Turkish-made armed and unarmed drones are among the products of this drive. The Undersecretariat for Defense Industries (SSM), the agency responsible for military procurements, has raised the number of its projects to 553 from single-digit figures in previous years. The monetary worth of the projects stands at $41.4 billion and exceeds $60 billion, including projects that are still in tender stages.

The SSM projects include the local manufacture of tanks, ships, surveillance and fighter aircraft, attack helicopters, surveillance satellites and armored combat vehicles, among others. Some of those projects have reached the production stage; others remain in the process of preparation.

The Turkish-made weapons have been in use for some time in military operations against Kurdish militants in Turkey’s southeast, but most of them are being used for the first time in a cross-border operation.

The contributors to the defense industry drive include government agencies and enterprises owned by the Turkish Armed Forces Foundation such as the Turkish Scientific and Technological Research Council (TUBITAK), MKEK, ASELSAN, rocket manufacturer ROKETSAN and aerial electronics maker HAVELSAN as well as many private sector companies. ASELSAN, in particular, stands out with ambitious achievements in the realm of high-tech electronic warfare systems.

Since the US Senate’s blockage of the gun sale, the MKEK has accelerated a project for Turkish-made automatic guns and rifles. The project has now entered production stage. In cooperation with private companies, the MKEK has also began deliveries of the Turkish-made MPT-76 infantry rifle to various branches of the security forces, including the presidential security unit. The first exports, meanwhile, have gone to Somalia.

The government has set a target to place Turkey among the world’s top 10 defense industry exporters by 2023, the centenary of the modern Turkish republic. According to defense industry expert Dora Uzkesici, however, achieving this target requires Turkish exports to reach $25 billion per year. The country’s exports stood at $5.9 billion in 2016, and last year’s sales are estimated to be worth an approximately equal figure.

At present, the needs of the Turkish military and police appear to be the main driver of growth in the local defense industry. According to the 2016 performance report of the Defense Industry Manufacturers Association, which brings together publicly owned and private companies, 89% of the $11.9 billion orders the sector received in 2016 stemmed from domestic demand. The 2017 data has yet to be released, but an increase in the figures would be no surprise, given the large-scale security operations in the southeast and the Euphrates Shield and Olive Branch operations in Syria.

In December, Erdogan became the sole boss of Turkey’s defense industry after the government used its emergency rule powers to issue a legislative decree that attached all defense industry institutions to the presidency.

Of note, the real owner of the “native and national” military industry notion is not Erdogan but his mentor, the late Necmettin Erbakan, who became the first voice of “moderate Islam” in Turkish politics in the 1970s and rose to the prime minister’s post in 1996.

Erdogan broke ranks with Erbakan to create the Justice and Development Party in 2001, when he famously said he had disowned his mentor’s “National View” ideology.

Before entering politics, Erbakan was a distinguished mechanical engineer whose career included a stint at a German factory involved in military research. Erbakan advocated a “heavy industry thrust,” including the local production of engines, tanks and cannons. Erdogan may have claimed to have “taken off the National View shirt,” but the ideas of his mentor loom large in his rhetoric today.

Ankara’s frequent emphasis on the use of Turkish-made weapons in Operation Olive Branch suggests that Erdogan and the government see the campaign as an important showcase for such weapons and military technology, with a view of boosting marketing and exports.