Turkey has made significant strides in developing its defense industry during the past four years, but it is still being held back by its dependence on other countries' goods and technologies. 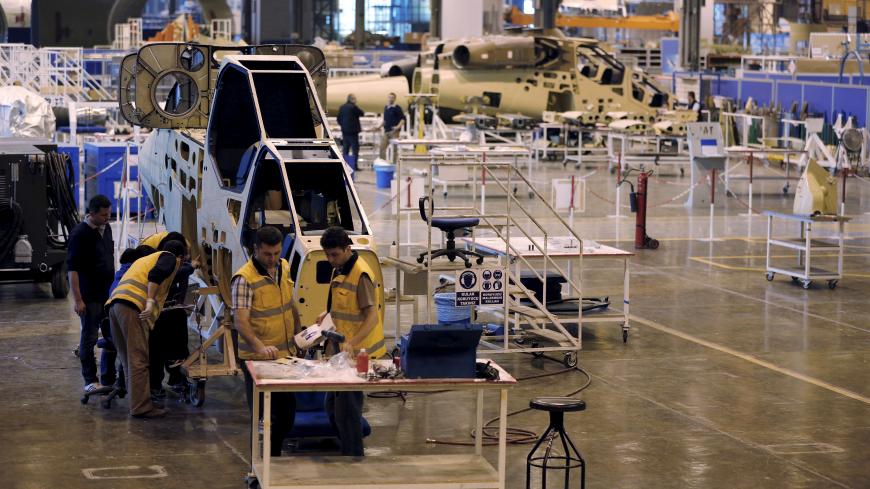 Ankara recently hosted an eager crowd at the first Turkish Defense Industry Summit, but all the accompanying fanfare wasn’t enough to hide the most significant flaw in Turkey's own defense program — foreign dependence. All of Turkey’s state-controlled defense industries were represented at the Dec. 12 summit, held at the Presidential Complex and organized by the Defense Industries Undersecretariat (SSM), which is tasked with developing the country's industry and modernization of the Turkish Armed Forces.

The SSM has been under the direct authority of President Recep Tayyip Erdogan since 2017. The Turkish Armed Forces Foundation (TSKGV), the state-controlled giant that owns majority shares in Turkey’s top defense companies, was also moved from the Defense Ministry to Erdogan's desk in 2017.

The combined revenue for these companies in 2017 was around $3.5 billion. According to 2017 research, TSKGV is an empire responsible for 43% of Turkey's military sales and 41% of its exports. It employs 40% of its personnel and consumes 60% of its research and development funds.

Erdogan, speaking at the summit, said Turkey has reached 65% self-sufficiency in defense industry production. He also remarked, [“We are] currently working on 650 projects whose costs total $60 billion.”

Turkey introduced the TAI T625, or the Gokbey, at the defense event, its first general-purpose helicopter. Produced as a prototype at TAI facilities, the aircraft's first flight was Sept. 6, and mass production is scheduled for the end of 2019.

SSM head Ismail Demir told those gathered that officials will be visiting a Southeast Asian nation this month to finalize the export of T129 Atak attack helicopters. Although Demir did not disclose the buyers, previous reports have suggested it might be the Philippines.

Ankara signed a deal with Pakistan in 2017 for the sale of 30 Ataks, making it Turkey's largest single defense export order to date. Turkey offered the Pakistanis a $1.5 billion line of credit in 2017, but the deal’s payment terms are unknown.

The Pakistani deal, while good news for Ankara, also exposes the biggest flaw in Turkey's defense industry. TAI will manufacture the T129 under license from the Italian-British company AgustaWestland, and to fulfill the Pakistani contract, it has to acquire US export licenses for the US-made power pack for the aircraft.

The Atak is powered by two CTS800-4A turboshaft engines, made by the Light Helicopter Turbine Engine Co., a successful 50/50 partnership between Honeywell International and Rolls-Royce dating to 1984.

The agreement with Pakistan has been postponed for six months because of the US license applications. Given the strains in US-Turkish relations, the delay could drag on considerably. Ankara has now begun searching for helicopter engines for Ataks in Europe and China.

Turkey began a turboshaft engine program in 2017 in the move toward overall independence, but it will apparently take at least eight years before mass production can begin.

Another example of Turkey’s foreign dependency dilemma is the ambitious Altay main battle tank project. BMC, the Turkish-Qatari armored vehicle manufacturer, has been contracted to produce the Turkish-designed Altay MBT.

According to Ankara's plans, production of the first batch of 250 Altay tanks will begin in 2019, the first 15 tanks will be put into service in 2020, and 20 more tanks will be delivered in 2021. Turkey will procure about 1,000 tanks, which will replace most of the old tanks in its inventory. The project will be spread over 20 years and cost around $25-30 billion.

As previously reported by Al-Monitor, despite tense relations with Turkey, it looks like Germany will be involved in producing the Altay's engine. BMC has entered into a partnership with the Dusseldorf-based Rheinmetall Group and will build a joint engine factory in Adapazari, in northwest Turkey.

Rheinmetall, which manufactures Leopard tanks, will support BMC’s production of the first 250 Altay tanks by providing MTU Friedrichshafen 1,500-horsepower engines. It will also provide technology for BMC to develop an 1,800-horsepower engine to be used in subsequent production.

The Altay project has gotten to the mass production phase without problems in procuring its systems, but engines remain an issue for Turkey. BMC produced 600-horsepower diesel engines for all the armored vehicles for the Turkish Army in 2017 and is currently testing a 1,000-horsepower engine that is supposed to be the basis for the 1,500-horsepower Altay diesel engine. Delivery is set for 2021, meaning the Altay will have to wait at least three years for a Turkish-made power pack.

In related news, on Dec. 13 Ankara announced the creation of the Turkey Space Agency, which has been in the works for several years. The agency is to “prepare and carry out the National Space Program in line with the policies determined by the president of Turkey.” How Turkey will overcome its foreign dependency in aerospace is a mystery.

Ankara, which is excited about exporting Atak helicopters and Altay tanks, knows it must minimize its foreign dependency, especially in regard to power packs, transmissions, sensitive optic lenses, software and aerospace technologies. Its goal is to cut dependency to about 10% by the republic’s 100th anniversary, in 2023. To accomplish that, it must increase defense funds allotted for research and development (which currently amount to about 1%), increase defense industry personnel from the current 3,000 to 30,000, and achieve robust integration of the sector with academia.

The presidential palace, in taking over the defense industry's strategic decision-making, has been touting effectiveness, efficiency and speed. It will need to make good on that potential if it is to reach its 2023 goals.