Decision-making power in Turkey's defense industry is shifting from the military to businessmen close to President Recep Tayyip Erdogan. 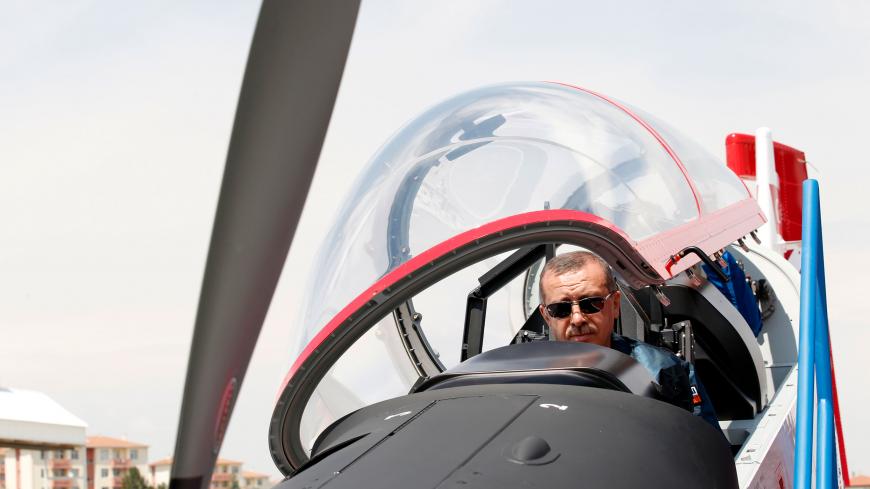 The authoritarian normalization that continues to mark relations between Turkey’s political and military echelons since the 2016 failed coup is now affecting the policymaking process in the country's defense industry. The industry is the new favorite of President Recep Tayyip Erdogan, as the bruising financial crisis heavily hit his former favorite sector, construction.

Thus, businessmen close to Erdogan — a group I call “the president’s men” — are now in a race to grab a piece of the pie. However, it's still hard to say that Erdogan’s circle has taken full control of the defense industry’s capital and the political decision-making processes.

Turkey's defense industry is basically composed of three sectors, each competing for a bigger share and trying to establish a monopoly over certain branches of the industry in both domestic and foreign markets.

The first sector is the military-controlled Turkish Armed Forces Foundation (TSKGV), run by retired generals — influential actors of the “old Turkey” before the Erdogan era. TSKGV has dominated all defense sectors for more than three decades with its many companies. For now, no private company can rival Aselsan in communications, radar and information technology; Roketsan in rocket and missile production; Havelsan in electronic warfare; Isbir in electric and power systems; and Aspilsan in military-type batteries.

Sadik Piyade, TSKGV deputy general manager and a retired general, said in a September interview that in Turkey's defense industry, the foundation handles some 40% of all domestic sales (around $2.3 billion) and 38% of its exports (some $840 million). TSKGV companies are pivotal in defense research and development as well, holding 62% of that market.

In December 2017, Erdogan issued a decree placing TSKGV under his auspices. Since then, however, Erdogan hasn’t quite managed to establish full control over the institution, which mainly remains under the influence of the retired generals. Yet that seems likely to change in four to five years.

In the second sector are joint ventures: Turkish companies collaborating with Western partners that bring in investments. Most of these joint ventures were formed by pro-Western Turkish contractors in the 1990s, mainly from the construction sector and their international partners, including Nurol Defense Industry, Turkish Aerospace Industries Corp. (TAI), MIKES and Koc Holding's Otokar. TAI is another of TSKGV's companies.

These Turkish-West ventures entered the defense industry market in the early 2000s as a wannabe leading force and rivaling TSKGV — yet they seem to have lost steam in the past decade.

The third sector — the new rising stars of the defense industry — are led by the president's men. They and their companies are tied to Erdogan: Baykar Makina, owned by the family of Erdogan’s son-in-law, Selcuk Bayraktar; BMC, owned by the Ozturk family and Ethem Sancak, a member of Erdogan's Justice and Development Party (AKP) and its Executive Council; and the Tumosan unit of Albayrak Group.

BMC’s position in the defense industry as well as its projects and expectations provide the necessary clues to define the president’s men.

In early 2019, Erdogan offered generous incentives to BMC, such as the opportunity to lease Turkey’s largest tank maintenance factory to produce the indigenous Altay main battle tank under a 25-year contract for only $50 million. This transfer of a tank factory in Sakarya province to BMC is still highly controversial in Turkey, with the main opposition party criticizing it at nationwide rallies because of transparency and accountability issues. Also, factory workers organized several protests against the decision.

Though the debates continue, the Turkish military expects to need 1,000 Altay tanks over 20 years, and Qatar plans to purchase 100.

The deal will mark Turkey's first export of a domestically produced tank, though Qatar hardly needs 100, given its geostrategic location and its lone, 40-mile land border. Nonetheless, such a big cooperative deal in the defense industry helps strengthen Qatar’s ties with Turkey, guarantees Turkey's continued military-political shield against the Saudi-led bloc and blockade, and helps Doha diversify its defense sources.

BMC went to a joint venture with Qatar’s Barzan Holdings to manufacture engine and transmission power packs for the Altay tank. The cooperation could hit serious trouble if the company fails to deliver on its pledge of developing a 100% Turkish-made power pack.

Another joint venture was established in April 2017 by SSTEK Defense Industry Technologies Inc., owned by Turkey's Presidency of Defense Industries (SSB), which has 100% of the capital to carry out design and development in turbomotor technologies in line with Turkey's needs. SSTEK then sold 55% of its shares to BMC and 35% to TAI.

Whether BMC's TRMotor can deliver diesel engines for the Altay tank will be the first real test for the Turkish-Qatari military and defense partnership.

BMC wants to penetrate jet engine production as well. After securing Erdogan's political backing, BMC’s TRMotor went to a joint venture with TAI to develop the jet engine for Turkey’s indigenous TFX aircraft project with the help of the UK’s Rolls-Royce. In March, however, Rolls-Royce​ announced it was withdrawing from TRMotor because of an irreconcilable difference over intellectual property caused by Qatar’s involvement with BMC.

In short, BMC is the biggest rival of TAI in Turkey's aerospace sector, and of FNSS in land systems. FNSS is a joint venture owned by Nurol Holding of Turkey and BAE Systems Inc. of Arlington, Va. BMC is trying to establish a monopoly in military diesel and jet engines, and also seeks to monopolize the raw material production field of boron mining it recently entered.

We have yet to see whether a spirit of gentlemanly competition among TSKGV, the joint ventures of the 1990s and the president’s men will result in a visionary unification, or if the race will become destructive. Joint ventures are having a rough time. TSKGV, now under the jurisdiction of the presidential palace, is struggling to evade Erdogan’s attempts to take full charge. Meanwhile, Erdogan's favorites are rising quickly to the top. All actors are determined to use whatever bureaucratic, economic and political clout they have to protect their monopolies in various fields, kill off small businesses and repel other big companies from entering their territories.