Turkey’s military base in Qatar to expand with air, naval elements

Turkey and Qatar have agreed to expand the Qatar-Turkey Combined Joint Force Command in Doha with aerial and naval components as stakes grow higher in the Gulf region. 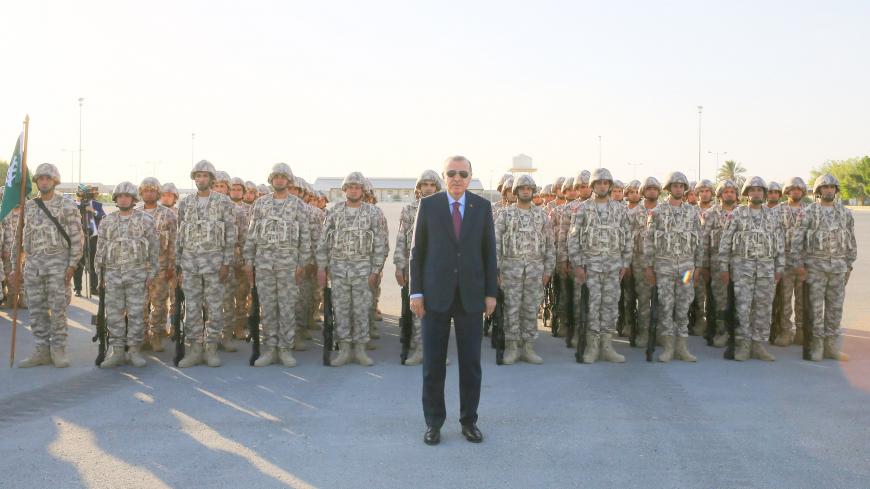 President of Turkey Recep Tayyip Erdogan poses for a photo with soldiers during his visit at the Qatari-Turkish Armed Forces Land Command base in Doha, Qatar, on Nov. 15, 2017. - Photo by Kayhan Ozer/Anadolu Agency/Getty Images

The Qatar-Turkey Combined Joint Force Command has been active since October 2015 at the Tariq bin Ziyad military base outside Doha, comprising commando platoons, military engineering units, indirect fire support teams, and air force and naval liaison teams in what is basically a mechanized battalion battle group involving about 300 Turkish soldiers. From the outset, Turkish President Recep Tayyip Erdogan and Qatari Emir Sheikh Tamim bin Hamad Al Thani agreed on a rapid expansion of the base, but foot-dragging by the Qatari bureaucracy and problems related to location assignment have delayed the enlargement.

According to recent reports in the Turkish media, however, the facility is on course to expand in October with the addition of an air base and a military port. As a result, the Turkish contingent will grow into a brigade task force of about 2,000 soldiers, including army, air force, navy and special forces elements. Erdogan and Thani are reportedly scheduled to attend the inauguration ceremony.

The Qatari base has been the focus of increased Turkish attention in recent months, as evidenced by a number of high-level visits, joint trainings and war games. Turkish Defense Minister Hulusi Akar visited the base in December, inspecting the facility. A visit by Vice President Fuat Oktay followed in March.

Cooperation between the Turkish and Qatari militaries has notably intensified since last year. In February 2018, Turkey’s Gokceada frigate visited the Doha port as Turkish and Qatari naval forces conducted the first in a series of joint trainings. In a string of drills in April, all of them in Qatar, troops from the two countries held live-fire field exercises, commandos had small-unit action trainings as part of border security exercises, and the air forces conducted the Falcon-21 drills, with three Turkish F-16 jets flying in Qatari skies for the first time.

In other initiatives this year, Turkish and Qatari special forces have held joint counterterror drills, and the Turkish Gendarmerie Command has offered training to Qatari security forces in the field of internal security.

The ultimate objective of those exercises, involving prominently the naval and air forces and focusing on counterterrorism and internal security, is to enhance interoperability between the security forces of the two countries. If the desired level is achieved in the drills, joint Turkish-Qatari naval and air patrols in the Gulf next year should not come as a surprise.

The defense industry is another area of expanding cooperation, with Turkey growing into a major supplier of military equipment for Qatar.

Ankara-based analyst Ali Bakeer, who closely follows the Gulf, stressed that although Turkey had previously sold several aerial and naval systems to Qatar, its military exports to the emirate have increased “markedly” since June 2017, when a severe crisis erupted between Doha and its Gulf neighbors, with Saudi Arabia leading an economic and diplomatic embargo against Qatar.

Speaking to Al-Monitor, Bakeer noted that Turkish defense companies — among them Baykar, which produces the TB-2 armed drones; Nurol Makina, the manufacturer of the 4x4 Ejder combat vehicles; BMC, which produces the Kirpi mine-resistant, ambush-protected vehicles and Amazon multipurpose armored vehicles; and the Anadolu Shipyard, which manufactures cadet training ships — emerged as “big winners” from the 2018 International Maritime Defense Exhibition and Conference in Doha, signing deals totaling about $800 million with Qatar.

He further stressed that Turkey’s ASELSAN, which produces radars, surveillance systems, sensors and radios, has formed a joint venture called BARQ with Qatar’s Barzan Holdings, and Turkey has been commissioned to establish a naval base for special operations in Qatar.

Bakeer added, “In late 2018, Turkey’s Defense Industries Management and BMC signed a multibillion-dollar contract for the serial production of the Altay main battle tank. Initially, 250 tanks are to be produced for Turkey and 40 for Qatar, with an advanced version to follow.”

BMC is a joint venture between Turkish defense industry giants and the Qatari military. Ethem Sancak, a businessman close to Erdogan and a member of the ruling Justice and Development Party’s executive board, holds 25% of BMC shares. The Ozturk family holds another 25.1%, with the remaining 49.9% owned by the Qatar Armed Forces Industry Committee.

In early 2019, the Ankara government offered generous incentives to BMC as it leased Turkey’s largest tank factory, located in the northwestern province of Sakarya, to the company to produce the Altay tank under a 25-year contract for only $50 million.

Under the deal with Turkey, Qatar will initially receive 40 Altay tanks. For Turkey, the deal will mark its first export of a domestically produced tank. In fact, the emirate hardly needs that number of tanks, given its geography and the length of its only land border — a stretch of some 60 kilometers (37 miles) with Saudi Arabia. Yet such big cooperation deals in the defense industry contribute to strengthening Qatar’s ties with Turkey, guarantee the continuation of its military-political shield against the Saudi-led bloc and help diversify the procurement of its security needs.

BMC has made a commitment to Qatar that once the initial batch of 40 tanks is completed, a locally made engine will be used in the Altay tank thereafter, sources knowledgeable about the matter told Al-Monitor. The cooperation could hit serious trouble if the company fails to deliver its pledge of developing a 100% Turkish-made power pack. In this sense, the BMC venture will be the first real test for the Turkish-Qatari military and defense partnership.

In any case, efforts to enhance interoperability between the two militaries and Qatar’s growing purchases of Turkish military systems appear bound to raise Turkey’s profile in the Gulf, which will naturally affect the two countries’ regional geopolitical postures.

The Qatari emir is the foreign leader with whom Erdogan talks most often. The increased frequency of their telephone calls and meetings this year signals that bilateral cooperation will grow further in various fields in the coming period. Will cooperation become more institutionalized in the defense industry field? This will depend on how much the two countries’ security establishments succeed in enhancing interoperability and the ability of their defense industry firms to jointly do business.