Growing ties with Qatar have become a hallmark of Turkish regional policy under the Justice and Development Party, with the two countries now readying to establish a joint wealth fund. 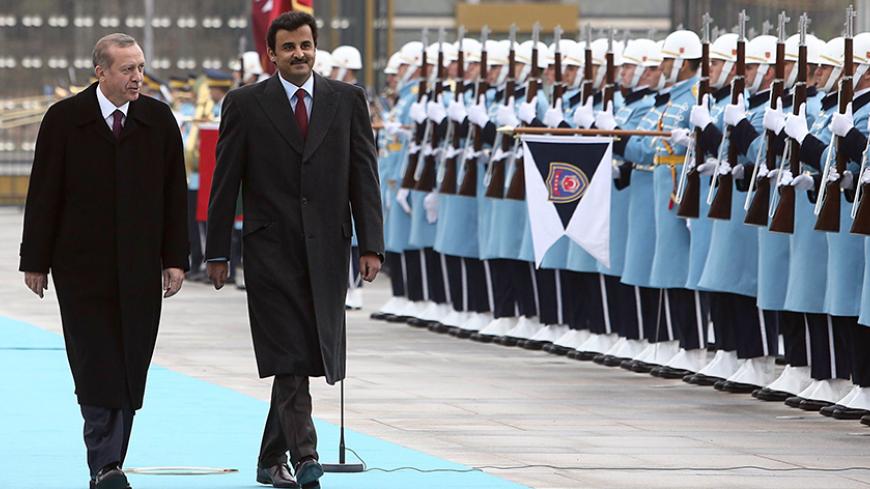 The International Forum of Sovereign Wealth Funds (IFSWF) announced May 23 the approval of the membership application of Turkey’s sovereign wealth fund, created hastily last year amid criticism that it looks like a “parallel budget” to deal with growing economic woes. The IFSWF, a global network of sovereign wealth funds, includes members from more than 30 countries representing over $3 trillion of global assets under management.

The Turkey Wealth Fund (TVF), which manages assets worth about $40 billion, is still in a fledgling stage, trying to grow through joint funds with other countries. The first such fund was established with Russia, and a protocol was signed with Qatar for the second one. The accord triggered reports in April that Caykur, the state-owned tea giant in the TVF portfolio, had been sold to the Qataris, which officials denied. What is actually on the cards, though, is Caykur’s handover to the Turkish-Qatari fund as part of other potential moves to flesh out the joint venture.

Qatar has recently emerged as one of the most important states for Turkey’s ruling Justice and Development Party (AKP). After a visit to Qatar in February, President Recep Tayyip Erdogan summarized how Ankara views the economic value of bilateral ties. Stressing that Qatari investments in Turkey amounted to $1.2 billion, Erdogan said, “We are working on increasing them. [The Qataris] took an important step by acquiring Digiturk. As you know, Qatar became also a 50% stakeholder in BMC. During the Turkey-Qatar Supreme Strategic Committee meeting in Trabzon, I took the Qatari emir on a helicopter tour. It was the snow season, and when I showed him the mountains, he asked whether any effort was under way for winter tourism in the area. I suggested we could make some joint investments there. The Qataris have also two banks in Turkey [Finansbank and ABank]. Additionally, in 2017, we will carry out defense industry projects worth $2 billion.”

According to Economy Ministry data, Qatari investments in Turkey stand at about $1.5 billion. This is a drop in the bucket, given that Qatar’s direct investments overseas amount to $53 billion, while foreign direct investment in Qatar is worth $36 billion.

Yet data show that Qatari investments in Turkey have been on the rise since 2013. Out of the $1.5 billion total, $1.2 billion comes from investments made in the past four years. The main Qatari investments include poultry producer Banvit; a 50% stake in armored vehicle manufacturer BMC, in which a Turkish media boss close to the government is also a stakeholder; Finansbank; ABank; the pay TV Digiturk; and investments in the real estate sector. Still, given that the foreign direct investment stock in Turkey amounts to $141 billion, the Qatari share remains a drop in the bucket from this aspect as well.

The short-term objective of the AKP regime is to lure more direct investment from Qatar, but also to increase Turkey’s share in major infrastructure projects that the emirate has launched in preparation for its hosting of the FIFA World Cup soccer tournament in 2022.

Regarding Turkey’s hitherto share in the construction drive, Turkish Deputy Prime Minister Mehmet Simsek offered the following overview in November: “Turkish contractors have undertaken projects worth $13.7 billion in Qatar. Qatar is according positive discrimination to Turkey not only in words but also in deeds, giving strong support to Turkish companies doing business there. Qatar ranks seventh on the list of countries where Turkish contractors have taken the most projects. The strong bonds and relations between us have turned into a strong cooperation. Land road projects top the projects realized in Qatar. Turkish contractors are involved also in metro, airport and seaport projects. The success of our companies in the Doha metro and airport projects is particularly remarkable. I’d like to also underline that we are ready to provide any contribution to our Qatari friends in the 2022 World Cup organization.”

With an investment budget of $170 billion for the World Cup, Qatar is a lucrative trade destination for Turkish companies, which turned up in force at the Expo Turkey by Qatar Fair, held in April in Doha. According to Turkish businessman Hakan Kurt, the organizer of the exhibition, Turkish companies have completed contracts worth about $13 billion in the emirate, with projects amounting to $7.5 billion still under way. “We expect that the projects undertaken by Turkish companies in Qatar will reach $15 billion to $20 billion by 2022,” Kurt said. “Expo Turkey by Qatar will play an important role in achieving this target.”

No doubt, Qatar’s wealth and energy resources make it an attractive trade partner for any regional or global player, not just Turkey. The tiny emirate, where expatriates make up 83% of the 2.5 million-strong population, boasts a per capita income of about $75,000, which places Qataris on top of the world’s richest and whets the appetite of business aspirants. Though the Qatari economy is ultimately worth $156 billion, roughly a fifth of Turkey’s, everybody wants to sell goods to Qatar, grab a share of its spending and lure Qatari capital to their countries. The emirate’s energy resources — 25 trillion cubic meters of natural gas, the third-largest reserve in the world, in addition to 25 billion barrels in oil reserves — represent another major incentive for close ties with Qatar, now and in the future.

A rich minority in the global village, Qatar has the problem of protecting its wealth and potentials, of course. Many are offering defense services to the emirate, and Turkey is one of them.

Al-Monitor columnist Fehim Tastekin analyzed recently the military cooperation accords that Turkey has reached with Qatar, citing comments by Turkey’s Avaz TV, a channel in the state-owned TRT network, which reflect also the economic aspect of the deals. Referring to the most notable accord, which envisages the deployment of Turkish troops in Qatar, the channel said, “This agreement is also significant to find new markets for Turkey’s defense industry. Turkey and Qatar have been taking nearly identical approaches to the crises in the Middle East. They share the same position in supporting the Syrian opposition, as well as regarding the crises in Iraq and Yemen. The accord has a further significance for Qatar because the Sunni government in Doha is uneasy with the melting of ice between the United States and Iran. Doha's government doesn’t consider the American soldiers in Qatar as an adequate military deterrent, hence Qatar’s decision to overcome the deficiency by cooperating with Turkey.”