Qatar’s friendship is being called into question in Turkey amid disappointment over Doha’s pledges of economic support and signs that Qatari investors are pulling out of the country. 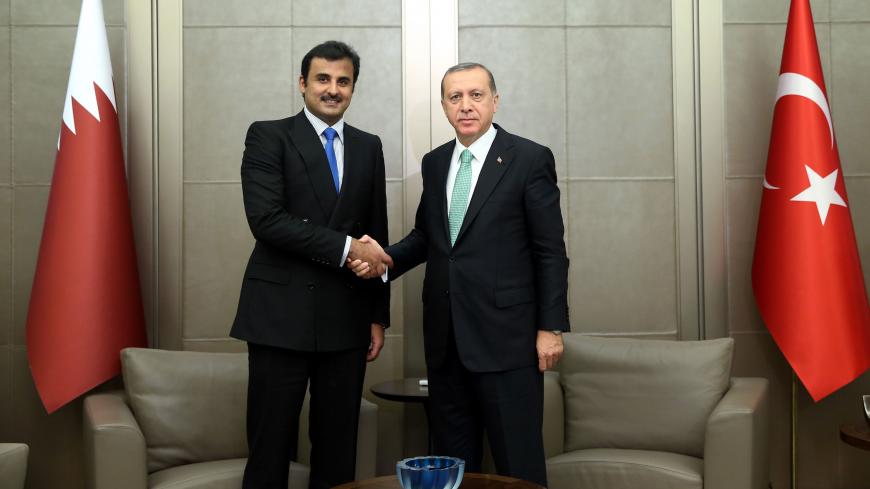 Whiffs of cool breezes seem to be blowing in the usually warm ties between Turkey and Qatar, who have been foul-weather friends to each other in the past several years. Qatar’s pledge to invest $15 billion in Turkey, made at the height of Turkey’s currency crisis last year, has caused disappointment. Qatari Emir Sheikh Tamim bin Hamad Al Thani, who owes President Recep Tayyip Erdogan a debt of gratitude for Ankara’s support against the Saudi-led siege of the tiny emirate, has failed to fully deliver on his promises. And what is more, Qatari investors have begun to pull out of Turkey in the midst of ongoing economic turmoil.

In the first five months of the year, $4.6 billion in Qatari investments exited the Istanbul stock exchange, according to figures from Turkey’s Central Securities Depository cited in the financial daily Dunya. Portfolios held by Qatari investors totaled about 10.2 billion Turkish liras ($1.8 billion) in May, decreasing more than 30% from 14.7 billion liras ($2.5 billion) in December.

Those who are loath to see the friendship called into question maintain that the investment pledges have been fulfilled. Yousuf al-Jaida, the head of the Qatar Financial Center, told an economic forum in Turkey in March that Qatari investments in Turkey had exceeded $20 billion, and that the emir had made sure that the $15 billion pledge was completed in August 2018.

The publicly known major Qatari investments in Turkey total about $6 billion and all of them belong to years prior to 2018, including $2.9 billion invested in Finansbank, $1.2 billion in the satellite network Digiturk, $770 million in Boyner Holding, $654 million in ABank, $470 million in poultry producer Banvit and $125 million in armored-vehicle maker BMC. In addition, about 120 Qatari companies are active in Turkey. Still, the amount of known investments falls short of the claimed figure.

When it comes to the $15 billion in investment pledged last year, there is not much that the public is aware of.

As a first step after the pledge, the Turkish and Qatari central banks signed a currency swap agreement in August, under which they bartered sums equivalent to $3 billion.

A currency swap between banks, however, can hardly qualify as an investment. According to Ugur Gurses, a well-known Turkish economist, the operation did not go beyond puffing up the Turkish central bank’s foreign reserves.

Gurses said he believes the Qatari pledge of $15 billion support, announced amid escalating tensions between Turkey and the United States that caused the Turkish lira to nosedive, was meant as a “gesture” of solidarity and was, in fact, a long-term declaration of intent. “Yet our side expects things to happen immediately,” he told Al-Monitor.

Gurses noted that Qatari companies, too, have been haunted by financial problems. “They had assumed that oil prices would go up to $80-$90, but the prices dropped and they began to experience budget deficits and cash flow crunches,” he said.

Turkey’s economic and political conditions are, no doubt, affecting the Qataris as well. Digiturk, bought by Qatar’s BeIN media group in 2015, for instance, appears to be in dire straits. Economy commentator Bahadir Ozgur said Digiturk’s subscribers fell to 2.4 million from 3 million over the past four years, atop a decline in its ad revenues. As a result, the company is unwilling to pay $1.5 billion for the three-year broadcasting rights of the Turkish soccer league, preferring to forfeit the $162 million down payment instead. “The $15 billion helping hand is gone with the wind,” Ozgur said.

Meanwhile, Qatari investors have allegedly dropped plans to acquire Basaksehir, an Istanbul soccer outfit enjoying Erdogan’s personal support, for which they had been prepared to pay $136 million, according to earlier reports. While the club’s failure to clinch the league title this season is widely seen as the reason behind the backtracking, a source knowledgeable about the matter expressed the opinion that “the sale would have gone ahead anyway if Qatari-Turkish relations were going well.”

Similarly, there has long been talk that Qatar’s sovereign wealth fund would acquire partnership in its Turkish counterpart, whose portfolio includes major public assets such as Turkish Airlines, the National Lottery, Ziraat Bank and Halkbank, but no plan has formally taken off. Experts believe such a partnership is unlikely at a time when Ankara’s credit ratings are going through the floor.

Curiously, even a “country day” initiative by the Istanbul Industry Chamber, designed to embellish bilateral ties, has failed to make headway with Qatar. Eager to discuss the idea, the chamber has been trying to obtain an appointment from the Qatari Consulate for five months, but to no avail, sources from the chamber told Al-Monitor. Telephone calls and e-mails alike have remained unanswered. “It is like talking to a wall,” one official said.

In any case, any Qatari reluctance for fresh investments or the pullout of existing ones can hardly be explained by Turkey’s adverse economic conditions alone, as challenging political factors are also at play.

The United States is keen to reconcile Qatar and the Saudi Arabia-United Arab Emirates camp so as to have a united front against Iran in the Gulf. To accept Qatar back into the fold, US allies in the region want Qatar to end support for the Muslim Brotherhood, but also to distance itself from Turkey and end its military partnership with it. The Qatari ruler’s upcoming visit to Washington on July 9 could bear on how the feud between the Gulf neighbors develops.

As a tiny country that hosts 11,000 US troops, Qatar needs to be flexible and leave itself room to maneuver. Turkey’s support has been important against the threat of its neighbors, but this does not mean that Qatar would be willing to get involved in greater tensions involving Turkey.

Turkey, too, is aware of Qatar’s limits. In the energy rivalry in the eastern Mediterranean, for instance, Turkey has failed to get Qatar on its side. Much to Ankara’s chagrin, Qatar Petroleum teamed up with ExxonMobil in 2017 in a gas exploration deal with the Greek Cypriots, Turkey’s archrival. Although Ankara met the deal with silence, the Qatari move was, no doubt, an irritant in Turkey's efforts to protect Turkish Cypriot interests amid escalating exploration disputes that have seen Turkey send its own drillships and military frigates to the region.