Amid financial hardship, Erdogan looks to Qatar as 'rich daddy'

Turkey’s leadership, increasingly isolated in the region amid spats with Russia and Iraq, knocks on the doors of Israel and Qatar, with the latter providing much-needed foreign investment. 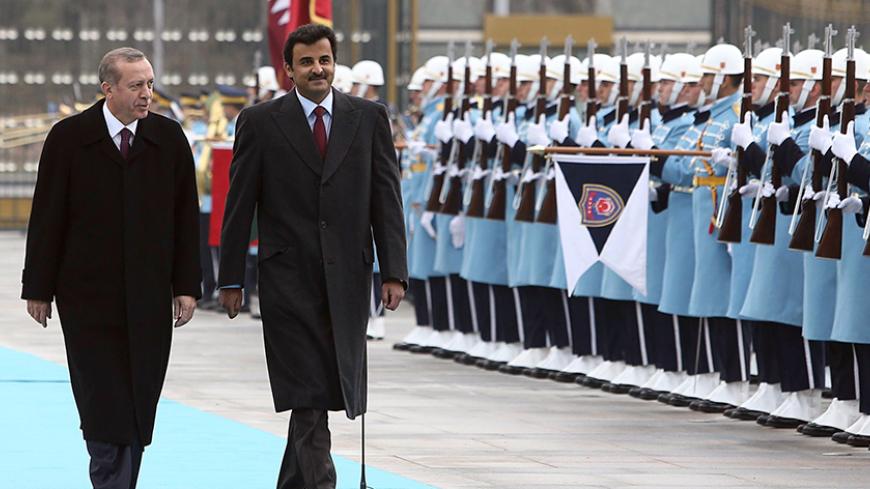 A series of controversial steps in the region has left Turkey increasingly isolated in its neighborhood. As a result, the Justice and Development Party (AKP) government has gone on a hunt for new “friends.” Normalizing ties with Israel is now back on the agenda. The second door the government has knocked on is Qatar's.

Yet, even Qatar’s friendship could not stop the Arab League from adopting a joint statement last week condemning the Turkish troop deployment in Bashiqa, near Mosul, and urging Ankara to respect Iraq’s territorial integrity. The deployment “is an assault on Iraqi sovereignty and a threat to Arab national security,” the statement said, while Arab League deputy chief Ahmed Ben Heli added that the Turkish troops “increased tumult in the region.”

Meanwhile, the AKP government seems to have postponed its claim of “neo-Ottoman and regional leadership” by joining the Saudi-led Islamic coalition against terrorism, while moving even closer to Qatar, a country with which Erdogan has had warm ties for years.

Snubbed by Russian President Vladimir Putin at the Paris climate summit in early December, Erdogan flew directly to Doha for talks with Qatari Emir Sheikh Tamim bin Hamad Al Thani. The sides signed an agreement for Turkey’s import of Qatari natural gas. Commenting on the agreement, Erdogan said, “As you know, Qatar was planning to enter the liquefied natural gas [LNG] sector in Turkey. They were exploring whether they could invest in Turkey in the realm of LNG storage. Now a step forward has been taken on this issue.”

As energy cooperation with Qatar moves higher on Turkey’s agenda, Qatari investments in Turkey are also noteworthy. A series of investments by Qatari companies have cheered up the AKP government, alleviating the impact of foreign capital flight from Turkey.

Since the Nov. 1 early elections, foreign investors have withdrawn some $1.5 billion from the Turkish stock and bond markets. The Qatar National Bank (QNB), for its part, announced last week it was putting 2.7 billion euros ($3 billion) in Finansbank, Turkey’s fifth-largest private bank.

In 2013, the Commercial Bank of Qatar had bought the majority shares of another Turkish lender, ABank, for $460 million. Tuncay Ozilhan, the CEO of Turkey’s Anadolu Holding, which sold the shares, would later comment “good chemistry” had been found with the Qataris, adding, “We are now relaxed and comfy. A rich daddy makes one joyous and easy.”

The QNB’s acquisition of Finansbank is a move of economic and financial significance for Turkey, coming as a morale booster both for the government and the financial markets at a time when economic confidence indexes have badly plunged. QNB CEO Ali Ahmed Al-Kuwari said in a statement that it was looking forward to contributing to Turkey’s economic future and boosting QNB's international activities.

The Qataris entered the Turkish media sector in 2008 when one of the country’s largest media groups, Sabah-ATV, in state receivership due to its owner’s unpaid bank debts, was acquired by a partnership between Turkey’s Calik Holding — in which Erdogan’s son-in-law Berat Albayrak, now energy minister, and his brother Serhat Albayrak served as senior executives — and Qatar’s Lusail International Media Company. The Qataris acquired 25% of the media group’s shares and put significant money in Calik Holding.

The Sabah-ATV group was later sold to businessmen close to Erdogan in a controversial transaction, which figured prominently in the corruption and bribery scandal that rocked the government in December 2013.

The boss of another pro-government media group, Star, has partnered with Qatar in the defense industry sector. In 2013, the Savings Deposit Insurance Fund (TMSF), which runs companies taken into state receivership, sold two newspapers, two TV channels and the BMC vehicle manufacturer — all seized from Cukurova Holding — to Ethem Sancak, a Turkish businessman famous for saying he was "in love with Erdogan." After buying BMC, which manufactures armored vehicles for the Turkish army and police, Sancak sold half of the company’s shares to the Qatar Armed Forces Industry Committee.

Most recently, the Bein group, an Al Jazeera affiliate, acquired Turkey’s biggest satellite television provider, Digiturk, in what was the largest Qatari investment in the Turkish media sector so far. The TMSF sold Digiturk, also a former Cukurova asset, to the Qataris without asking for a tender and without disclosing the financial terms of the deal. Digiturk, which holds the broadcast rights of the Turkish soccer league, has 3.5 million subscribers and broadcasts 239 television channels. Nasser Al-Khelaifi, the CEO of the Qatari company and president of French football club Paris Saint-Germain, called Digiturk’s acquisition “a key milestone in our global expansion.”

The Qatari direct investments in Turkey, which now stand at $6 billion, could soon reach $10 billion, according to media reports. Qatari investors are reportedly in talks to buy a stake in another large Turkish bank, whose name has not been disclosed.

The economic ties have developed against the backdrop of close personal relations between Qatar’s rulers and Erdogan, his family and inner circle.

The Qatari and Saudi support for Erdogan and the AKP has been also the subject of speculation regarding the huge mysterious inflow of unidentified foreign currency to Turkey during the years of AKP rule. The sum has reached an unprecedented $36 billion in total, with the monthly inflows increasing especially during election time.

Qatar’s support for Turkey’s president and government in times of hardship does not go unanswered, of course. In March, Istanbul’s Metropolitan Municipality made a gesture in its own way, renaming one of the city’s major roads “Qatar Boulevard.”