Since coming to power in 2002, Turkey’s ruling party has employed unprecedented means to expand pro-government media and curb critical media, acting in cooperation with crony businessmen and using public funds. 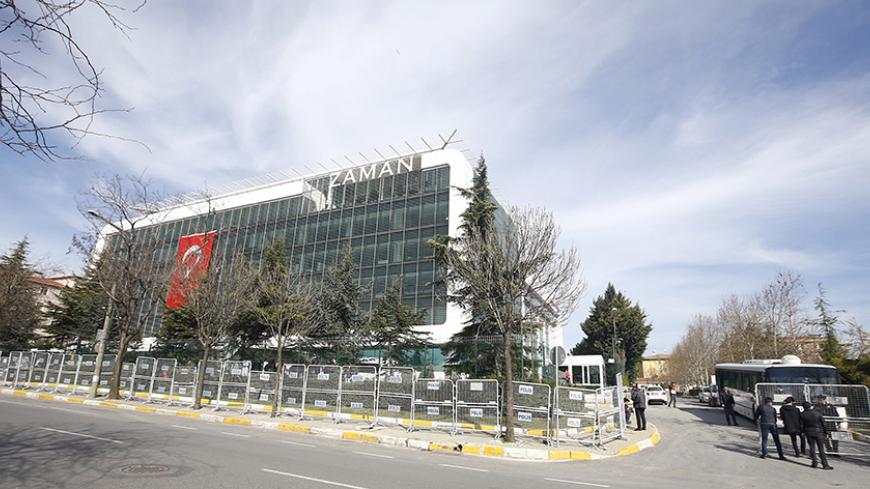 ANKARA, Turkey — In late March, Turkey’s 20-year-old liberal daily Radikal announced it was closing down, two years after it terminated its print edition to become a web-only publication. Though financial strains were said to have forced the closure, the real reason was an open secret — the daily’s editorial line and writers had long irked President Recep Tayyip Erdogan. In his valedictory column, Radikal veteran Cengiz Candar — also an Al-Monitor columnist — said he was ending his four-decade career because doing journalism in Turkey was no longer possible.

The government-media struggle has been omnipresent in Turkey. Previous governments, too, have sought to control the media, but none could even hold a candle to the means of repression and intimidation the Justice and Development Party (AKP) has employed.

When the AKP came to power in November 2002, a major opportunity was already there for it to redesign the media to its will. A number of banks had collapsed in the 2001 financial crisis, ending up in state receivership at the Savings Deposit Insurance Fund (TMSF), along with other assets their parent corporations owned, including newspapers and television channels. The TMSF, in other words the state, had become Turkey’s biggest media boss, controlling the Sabah, Takvim and Star newspapers and the Star, Kral TV, ATV and Cine-5 channels. In later years, the TMSF also seized the Aksam and Gunes dailies, the Show TV and SkyTurk channels, leading pay-television operator Digiturk and a number of radio stations and magazines, as their owner, Cukurova Holding, ran into trouble.

Businessmen and contractors close to Erdogan won almost all auctions the TMSF held to sell off those media outlets, taking the lead in building a new pro-government media, propped up with loans of up to $1 billion from public banks. So while the TMSF was selling off media outlets to collect the collapsed banks’ debt to the Treasury, public banks subordinate to the same Treasury were issuing loans to crony businessmen to finance those acquisitions. Some buyers such as Ethem Sancak, famous for saying he was “in love with Erdogan,” even got bonuses. Sancak, who bought the Star newspaper and then the Aksam and Gunes dailies and the SkyTurk channel, also acquired Cukurova’s BMC company, which manufactures armored vehicles for the Turkish army and police — without there even being a public auction, and with the TMSF taking over the company’s existing debts.

The TMSF sales thus spawned new, pro-government media groups, which aligned with the Gulen movement’s well-established media in backing Erdogan and the AKP. The alliance, however, collapsed dramatically in December 2013, when the AKP blamed Gulenist police and prosecutors for large-scale corruption probes involving government ministers, their relatives and AKP cronies. Claiming that the probes were a coup attempt, the government mounted an all-out war on the Gulen movement and blocked the investigations. The Gulenist media became a primary target in ensuing judicial probes, launched on grounds that the Gulen movement was a terrorist organization and had set up a “parallel state” within key branches of the government.

Using a different method this time, the government seized the management of Gulenist media through the rulings of a largely obedient judiciary. Pro-government trustees were appointed to run the Koza Ipek Holding’s Bugun and Millet dailies and the Kanalturk and Bugun television channels, and the Feza Media Group’s Zaman, Today’s Zaman and Meydan dailies, the Cihan News Agency, the Aksiyon magazine and other publications.

Gulenist newspapers, which operated mostly on a subscription basis, became pro-government overnight and soon their circulation plummeted. As a result, the trustees closed down Bugun and Millet. The public satellite provider Turksat, meanwhile, halted the broadcasts of more than a dozen Gulenist channels, including Bugun TV, Kanalturk, Samanyolu TV and S Haber. Soon other critical channels — the left-leaning IMC TV and the nationalist Benguturk TV — were also removed from the satellite.

Zaman, the flagship paper of the Gulenist media, saw its circulation shrink from about 800,000 in the pre-trustee period to about 5,000 as of April 4. The circulation of another critical daily, Taraf, also nosedived after its distribution company ended up in trusteeship, too, and halted deliveries to subscribers.

Today, more than two-thirds of the Turkish media are under government control, either owned by AKP cronies or run by pro-government trustees. The largest group that remains outside government control, Dogan Media, faces an investigation on charges of spreading terrorist propaganda, while its boss, Aydin Dogan, risks a hefty jail term for allegedly running a fuel-smuggling ring, a charge he denies. It was in this intimidating environment that Dogan closed down Radikal.

During its 13 years in power, the AKP government has pursued ambitious privatization programs worth $58 billion, but on the media front it has done just the opposite. Alongside the official Anatolia News Agency and public broadcaster TRT, it has created quasi-private newspapers and television and radio stations under its control, while taking care to keep them financially afloat. The lion’s share from the advertising of public entities goes to the pro-government media, including some 1 billion Turkish lira ($350 million) from the country’s three public banks in the past five years.

In another controversial move, the government last year amended the regulation on the so-called “yellow press cards” it issues to Turkish journalists as professional IDs. The amendment increased the government’s weight in the 15-member commission that reviews the applications and paved the way for public servants and even ministers to hold press cards. All journalists, meanwhile, were asked to submit applications to renew their cards, a process expected to be completed in late May. Given the unprecedented onslaught on critical media, many journalists are likely to see their press cards canceled, which would jeopardize their jobs.

In the AKP’s media order, pro-government papers have come to use identical headlines and even identical pictures on their front pages. In one striking example speaking of even heavier pressure on the provincial level, all 10 local newspapers in the province of Konya, the hometown of Prime Minister Ahmet Davutoglu, appeared with the same front page in March 2014. With each passing day, the Turkish press resembles more and more the official press of Soviet Russia or Hitler’s Germany, while the critical media is gasping for breath.