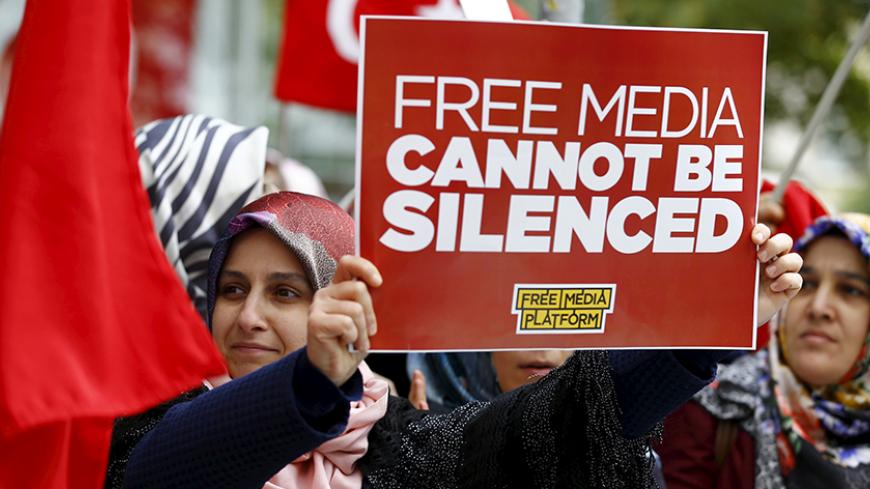 Supporters from the Gulen movement shout slogans during a protest outside the Kanalturk and Bugun TV building in Istanbul, Oct. 28, 2015. - REUTERS/Osman Orsal

On Oct. 28, just four days before Turkey's general elections, something happened in downtown Istanbul that should go down as a dramatic scene of global media history. A large team of bureaucrats and policemen raided the offices of Ipek Media, home of two newspapers and two TV channels. In fact, the police were blocked for a while at the gates by journalists and their supporters, some equipped with umbrellas to protect them from possible tear gas. Yet, the unwelcome guests crashed through the barricade by beating and handcuffing a few energetic defenders. Soon they entered the newsroom and, despite the protests of the personnel, shut down the broadcast.

A few hours later, the editors-in-chief of all four news outlets — Bugun and Millet dailies and Kanalturk and Bugun TV channels — were fired by staunchly pro-government figures. Many think that they will soon reinvent these media outlets, which are all critical of the government, as pro-government propaganda tools.

Why and how could this happen? And what does it tell us about the nature of the political regime in Turkey? Here are some facts and thoughts:

The silencing of Ipek Media came only two days after a controversial decision by Judge Yunus Suer, who had made a name for himself in 2014 for banning access to Twitter in Turkey. This time, he decided that Koza Ipek Holding, which owns Ipek Media and other companies, should be handed over to a government-appointed "trustee."

The decision was based on Article 133 of the Penal Code, which states: “If there is evidence that a crime has been committed within the framework of activities of a company and it is a necessity to reveal the material truth during the stage of investigation and trial, the judge or court may appoint a trustee for the undertaking of the company's business."

However, Koza Ipek Holding already had been under investigation for months, and the executives of the group opened all their financial records to the investigators, presenting no obstacle to revealing “the material truth during the stage of investigation." Moreover, the investigators found zero evidence for any wrongdoing in the holding's records. But in a mind-boggling interpretation of facts, the "expert report" the judge relied on decreed that this "unusual cleanliness" itself is the evidence that the holding must be engaged in very serious crimes.

The judge, in his two-page decision about appointing a trustee to Koza Ipek Holding, actually noted that this serious crime is "supporting terrorism." But the "terrorism" in question here is nothing related with bombs or guns. Koza Ipek Holding is simply a supporter of the Gulen movement, and its boss, Akin Ipek, is simply an explicit follower of the group's leader, Islamic scholar Fethullah Gulen. The movement is blamed for using its supporters in the police and judiciary for launching witch hunts on its enemies, something that President Recep Tayyip Erdogan rigorously supported from 2007 to 2012. The group is also blamed by Erdogan and his supporters for conspiring a "coup" in December 2013, which led to two subsequent corruption investigations.

The problem here is that while certain members of the Gulen movement in the police and judiciary must be tried for misusing their authority, the Erdogan regime has lately begun to condemn the whole movement — which has schools, kindergartens, charities, nongovernmental organizations and media — as a terrorist organization. Yet, there is no legal ground for defining the Gulen movement as a terrorist organization, as former Vice Prime Minister Bulent Arinc noted in a recent interview.

Moreover, even if Koza Ipek Holding has committed real crimes that deserved prosecution and the appointment of a trustee, the confiscation of the papers and TVs supported by the group has no legal basis. That is why, while the overtaking of the holding is an infringement of property rights, the overtaking of the media is an unabashed attack on press freedom.

This is all possible because certain elements of the Turkish judiciary, who are carefully appointed by the government to certain positions, act solely on the basis of the definitions and demands of the executive. When Erdogan condemns Gezi Park protesters, including football fans, as "coup makers," for example, certain prosecutors and judges agree with this definition and open a coup case. Not all of these cases end punitively, but they still help by putting people in jail for a while, depicting them as criminals and intimidating not just them but also other dissidents.

Deep down, the real problem is that the executive, who resides in a new giant palace, sees certain segments of society as not ordinary citizens but enemies within — the traitors to the nation who serve the global conspiracy against Erdogan's "New Turkey."

The Gulen movement is the No. 1 item on that list of "enemies within," but it is not the only one. The pro-president media also condemns the "terror media" every day, a term invented to demonize the Dogan Group, which owns the daily Hurriyet and CNNTurk, Turkey's most prominent and popular newspaper and news channel, respectively. Hurriyet is already on trial for supporting terrorism on ridiculous bases such as publishing a photo of a terrorist attack (by condemning it!) or interviewing a Kurdish politician.

So can some trustees take over Hurriyet and CNNTurk, and the few other remaining independent media outlets as well? As incredible as it sounds, it is not too improbable. A deputy of the ruling party, who is also the former speech writer for Erdogan, already promised that after the elections, "other newspapers will be brought to account" too, for they "keep insulting the president."

In short, Turkey's already shameful state of media freedom suffered another blow this week — and more might be coming. As a result, it is getting increasingly difficult to define Erdogan’s New Turkey as a democracy, if that term has any meaning other than frequent elections.