Turkish daily exposes transfer of weapons to IS

The feud between President Recep Tayyip Erdogan and his rivals in the Gulen movement is turning up news: Is there a link between exposure and the police raid of newspaper offices? 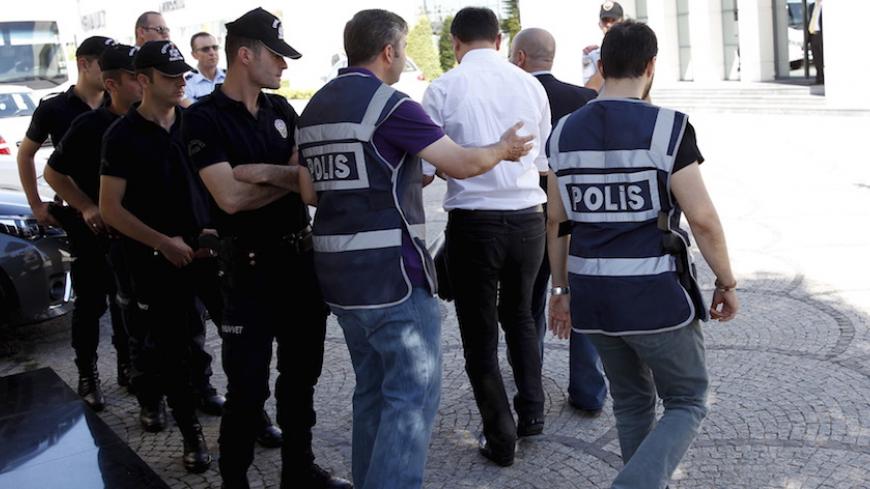 Police officers frisk an employee of the Koza Ipek Group during a raid at the company's office in Ankara, Sept. 1, 2015. - REUTERS/Umit Bektas

It was a day of intrigue in Turkey: police raids, weapons smuggling, political rivalries, terrorists — and Twitter.

On Sept. 1, police raided numerous news outlets, including one that happened to publish on that same day a report documenting weapons being transported from Turkey to the Islamic State (IS) in Syria with the knowledge of the local customs director.

The police searched more than 20 media organizations and commercial companies of Koza Ipek Holding, accusing owner Akin Ipek of being a terrorist leader. Some of Akin Ipek's media holdings are supportive of an ex-friend of Turkish President Recep Tayyip Erdogan.

In requesting permission to search Koza Ipek premises, a public prosecutor said Akin Ipek “is a leader of Fetullahist Terror Organization [FETO]; his group of companies finance terrorism and conduct propaganda for the terror organization.” Ipek owns daily newspapers Bugun and Millet, and channels Bugun TV and Kanalturk TV. The outlets are known to speak favorably of the Gulen movement, which is led by Islamic scholar, Sunni religious figure and Erdogan enemy Fethullah Gulen. (The difference in spelling between Fetullahist and Fethullah Gulen is considered an intentional jab.)

The movement led by Gulen, who now lives in exile in Pennsylvania, has numerous supporters in Turkey’s security and judiciary services who call themselves the “Service Movement.”

The raids take the battle between the Justice and Development Party (AKP) and the Gulen movement up another notch. This no-holds-barred confrontation between old allies began in December 2013, when prosecutors who were accused of being part of the Gulen movement launched bribery and corruption investigations against government ministers, families of top AKP leaders and companies close to the government.

On Jan. 19, 2014, following the December investigations of corruption and bribery operations, semitrailers said to be loaded with weapons and ammunition and under supervision of the National Intelligence Organization were stopped for a search on instructions of the Adana prosecutor. The AKP government later called it a “conspiracy by the Gulen movement.”

In the Sept. 1 raids, authorities seized documents and computers of Koza Holding. Among locations raided were the Ankara offices of Kanal Turk TV and Bugun newspaper and, according to Koza Ipek officials, the residence of Akin Ipek. The Hurriyet Daily News, citing "prosecutor sources," reported Akin Ipek left the country Aug. 30. An arrest warrant has been issued in his name, the report said.

The same day the raids were launched, the daily Bugun claimed to have documented weapons-related supplies being transferred from Turkey to IS in Syria. The grave banner headline read, “War supplies for [IS] at Akcakale," and was followed by two full pages of "shocking" color photos.

Akcakale is on the Turkish side of the border across from Tell Abyad in Syria. Tell Abyad, which had been under IS control, was captured in June by the Syrian-Kurdish Democratic Union Party, with the help of the air force coalition. Thus, the Kurdish cantons of Kobani and Jazeera along the Turkish border were connected.

Bugun's revelation continued: “For two months, every single day two semitrailer loads of fertilizer used in production of explosives, one semi load of metal sheeting and one truckload of electronic supplies and cables were transferred to IS-controlled areas of Syria. Moreover, every other day, one truckload of barrels filled with explosives and crates of fuses were moved across.”

The photographic coverage did not specify the dates of shipments through Akcakale customs to Tell Abyad.

Bugun's report said the shipments, made in front of the local customs director and his staff, also included metal piping often used in the production of mortar tubes. In the photographs, obviously taken from a building overlooking the crossing, one can see the barrels said to contain explosives, sacks of fertilizer to be used in explosive production, metal piping and sheets to use for weapons and armor manufacturing, and workers pushing the trailers loaded with them.

In archive photographs that Bugun added to the same pages, one sees jihadists posing with mortar tubes and armored vehicles allegedly produced with the supplies transferred over the border.

It is impossible to prove that the raids of Koza Ipek companies were a reaction to the photographs and report printed by Bugun on the same day. But the contrary is possible as well. If it is not a coincidence, perhaps leaking of the plans for the operation in advance could explain it.

Turkey’s famous "Twitter phenomenon,” known as Fuat Avni, had warned about the Sept. 1 police operation in a tweet sent out Aug. 28. Fuat Avni is known for his accurate tweets about Erdogan, Erdogan's close associates and from inside the security-intelligence bureaucracies. The tweet warned, “Akin Ipek operation is imminent. They are planning to seize his assets.’’

Although freedom of the press is once again threatened by the AKP government’s escalation of operations against the Gulenists on the eve of new elections, use of information as a weapon in this battle at least appears to be informing the public of some interesting secret events they were never told about.