Ahead of elections, Turkey clamps down on press freedom

The Turkish government’s mounting pressure on mainstream and opposition media ahead of the Nov. 1 elections results in a physical assault on a popular journalist. 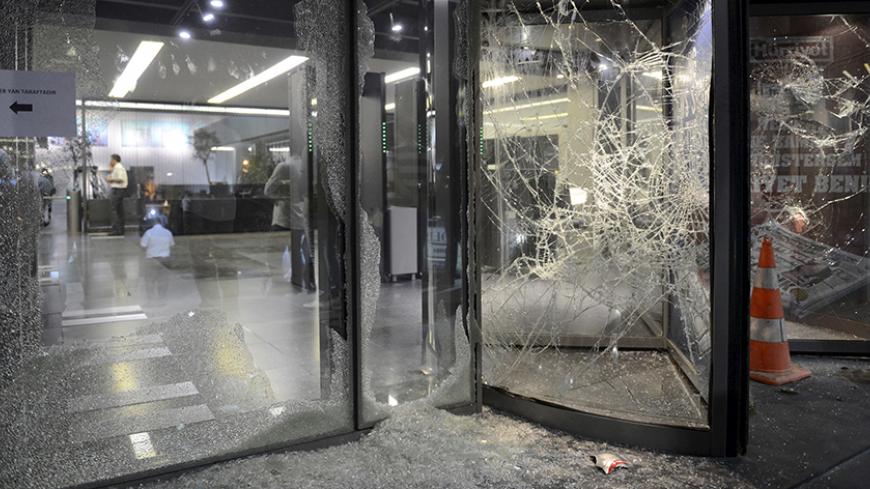 Smashed glass is seen at the entrance of the headquarters of the Hurriyet daily newspaper in Istanbul, which was attacked by ultranationalist Justice and Development Party supporters, Turkey, Sept. 8, 2015. The paper also was attacked Sept. 6. - REUTERS/Levent Kulu

September 2015 in Turkey will be remembered as a month in which suppression of press freedom reached an unprecedented level in almost all realms and attacks on journalists escalated.

The month began with a police raid on the offices of the Bugun newspaper and its sister TV channel as part of a judicial probe into the Gulen movement, the Justice and Development Party’s (AKP) former ally that now stands accused of being a terrorist group. The two media outlets are owned by Koza Ipek Holding, a business group close to the movement of US-based cleric Fethullah Gulen, which the authorities now call the Fethullahist Terrorist Organization (FETO). Koza Ipek is accused of financing FETO, a term first used in July in an indictment drawn up by the chief prosecutor’s office in Konya.

The Sept. 1 raids on the Bugun outlets were followed by a string of incidents that made September a truly black month for press freedom in Turkey. Frenzied AKP supporters attacked media offices, pro-government columnists issued death threats to critical journalists, scores of journalists were charged for insulting President Recep Tayyip Erdogan, dozens of Kurdish media websites were gagged and newspapers faced probes for spreading terrorist propaganda.

The Dogan Media Group, the most influential member of the mainstream media, has emerged as the primary target of the pressure Turkish journalism and journalists are facing in the runup to the Nov. 1 snap polls, called after the AKP lost its parliamentary majority in the June 7 elections after 13 years in power.

Turkey’s mainstream media has been significantly weakened and debilitated since 2008-2009, when the government began to openly curb press freedoms with boycott calls and giant tax fines targeting critical media. Yet it still remains in the government's crosshairs, for Erdogan never gave up his unrelenting quest to control the media and make it fully subservient. It seems that bullying and silencing the Dogan Media Group — or what remains of it — is now a key element in the government’s election strategy for Nov. 1.

September closed with a dramatic event illustrating the extent the pressure has reached with this political strategy. Shortly after midnight on Sept. 30, one of the Dogan Media Group’s most prominent journalists, Ahmet Hakan Coskun, host of the widely watched "Tarafsiz Bolge" (Neutral Zone) discussion program on CNN Turk and a popular columnist for the daily Hurriyet, was assaulted in a premeditated attack outside his home in Nisantasi in central Istanbul. He ended up in the hospital with a broken nose and rib. The four assailants had followed the journalist home from the CNN Turk building, where he had just finished his program. They were soon apprehended while Coskun underwent surgery.

For quite some time, the veteran journalist had been the target of pro-government media, columnists and Twitter trolls. The character assassination campaign had now turned into a real assassination threat.

In his Sept. 9 column, Cem Kucuk, a writer for the pro-government Star daily who owes his fame to bullying dissident and critical journalists, addressed Coskun with the following words: “Just like a schizophrenic, you still believe to be living in the days when Hurriyet ruled Turkey. We can crush you like a fly if we so wish. You’ve survived so far [only] because we’ve shown mercy.”

Despite this explicit death threat, Kucuk continues to write for the Star, which suggests the newspaper has no problem with a columnist issuing death threats to journalists.

Following Kucuk’s article, the Turkish public became acquainted with an AKP lawmaker who spoke of his eagerness to beat up Coskun. A video circulated online Sept. 16 showing Abdurrahim Boynukalin, a parliament member for Istanbul and head of the AKP’s youth branches, chatting with several other men, apparently party sympathizers, about Coskun and Hurriyet editor-in-chief Sedat Ergin. He was heard saying, “Our mistake was not to give them a beating early on. If they had been beaten …”

Only days before, on Sept. 6, the same Boynukalin was at the head of hundreds of AKP supporters who demonstrated outside Hurriyet’s headquarters in Istanbul and then tried to force their way in, smashing the glass entrance of the building. Addressing the crowd, Boynukalin said, “The Dogan group will clear off from this country after the Nov. 1 elections.” Two days later, a violent AKP crowd was back at Hurriyet for a second attack.

The conversation in the leaked video had taken place after the two attacks. Amid occasional laughs from his company, Boynukalin said, “Those people are such cowards. So gutless. The same goes now for the second occurrence. I saw how Sedat Ergin was sweating and so on, losing himself. Those people have never had a beating. Our mistake was not to give them a beating early on. If they had been beaten … Ahmet Hakan is such a coward. I thought today of going to the building where he lives in Nisantasi. Just going there and waiting outside like 'Come at me bro.'”

When asked about these comments, Prime Minister Ahmet Davutoglu played them down as “casual remarks made in the company of friends.”

The day Boynukalin’s video hit the Internet, prosecutors launched a probe against Hurriyet on charges it spread the propaganda of the outlawed Kurdistan Workers Party.

To further compound the picture, three of Coskun’s four assailants, who had various criminal records, turned out to be AKP members. Only one of the assailants was remanded in custody, while the three others were released at the end of the detention period. Three former policemen, who were detained as suspected instigators, also walked free. One of them had earlier stood trial together with well-known police chiefs accused of setting up a criminal gang over unlawful acts targeting Kurdish dissidents in the 1990s.

The release of the three assailants could embolden others who may think that if they attack journalists, their acts will go unpunished.

The assault on Coskun comes as a sequel to the campaign of vilification, bullying and silencing that pro-government media and government mouthpieces have been waging for months against the Dogan Media Group. What is even worse, a culture of impunity that legitimizes violence against journalists is increasingly gaining acceptance in AKP ranks. This could pave the way for graver attacks on journalists ahead of the elections.