The unbearable lightness of media in Erdogan’s Turkey

Police raids on pro-Gulen media outlets are seen as a prelude to suppressing the media opposed to President Recep Tayyip Erdogan prior to the snap elections. 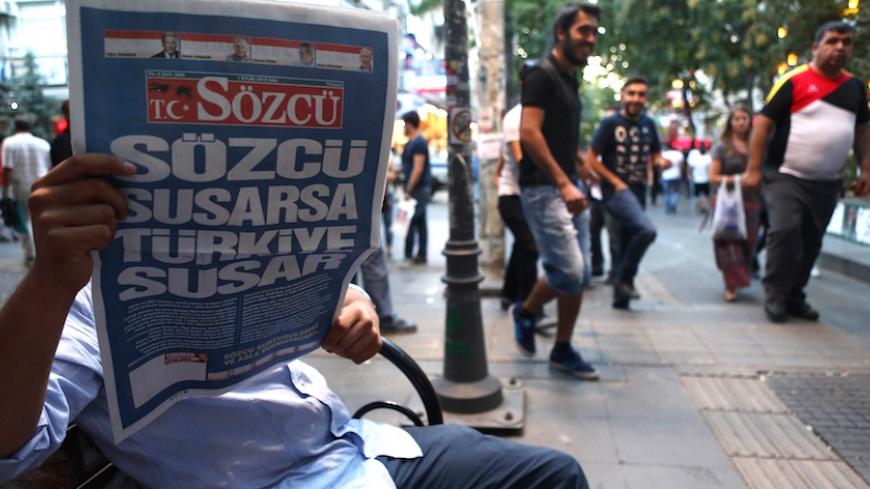 A man looks at Turkish daily Sozcu, whose front page reads "If Sozcu is silent, Turkey will be silent," on Sept. 1, 2015, in Ankara. Sozcu left the slots for opinion columns on its front page empty to protest against the government's "increasing pressure." - ADEM ALTAN/AFP/Getty Images

My fellow columnist Kadri Gursel, in his recent piece titled “Turkish daily exposes transfer of weapons to IS,” already informed Al-Monitor readers about police raids at numerous media outlets. These outlets under attack are owned by Koza Ipek Holding and include the daily newspapers Bugun and Millet and the TV channels BugunTV and Kanalturk.

The owner, Akin Ipek, is known to be a sympathizer of Fethullah Gulen, a cleric who has been living in self-imposed exile in the United States for 16 years. For the past two years, Turkish President Recep Tayyip Erdogan has portrayed Gulen as “public enemy No. 1.”

Actually, Gulen and Erdogan were close allies in the first decade of rule by the Justice and Development Party (AKP). The Gulen movement, thanks to its position and well-entrenched followers in the security forces and the judiciary, helped Erdogan travel safely through the hostile territory of the Turkish state system, which was known for its aversion to anything Islamic or, worse, Islamist. The Gulen movement helped Erdogan and his government overcome the threat coming from the military by rounding up scores of officers, including high-ranking officers of the general staff, and sending them to jail.

Then, their roads parted. All trials against the military have been dubbed show trials. Erdogan even made a Faustian bargain with the military, declaring the Gulen movement “putschists attempting a coup."

In Turkey, those who know both sides are aware that Erdogan is almost paranoid in his obsession with international workings, the Western world and the so-called international Jewish lobby, which he thinks is trying to undo him through Gulen.

Erdogan frequently uses the word Pennsylvania — the US state of Gulen’s residential retreat — in metaphors to lambaste and accuse Gulen. Some observers claim he uses Pennsylvania as a synonym for Washington, the seat of the US government.

Given the professed animosity of Erdogan and the AKP to Gulenists, it is not surprising that they would be subjected to pressure and persecutions. Over the space of a year, the acronym FETO, meaning “Fetullahist terrorist organization,” has become the official jargon for anything that might be even remotely related to the Gulen group.

Therefore, the recent wave of raids against the pro-Gulen media outlets was launched over an allegation that Koza Ipek Holding, the company that owns them and is mainly involved in the mining industry, is an illicit financial source to the “Fetullahist terror network.”

However, the timing of the raids and the general attitude of Erdogan and Erdoganists to critical and dissenting media made the last move less than convincing. On the contrary, even some of those who oppose the Gulen group expressed outrage and displayed strong solidarity with them to defend freedom of the press and freedom of expression. Among those was Cumhuriyet, the oldest daily in Turkey, which has strong Kemalist and center-left leanings and a reputation for being staunchly anti-Gulenist. The paper published a front-page editorial Sept. 2 with the headline “Let us stand together against the pressures.”

The editorial ended with the following strong-worded statement: “As the history books write, no despot who attacked the press could survive, but attacking the press brought every despot’s end.”

The reason for this unexpected display of solidarity and attempts to build unlikely alliances is that persecution of the pro-Gulen media outlets is seen as a possible prelude to efforts to suppress anti-Erdogan media prior to the snap elections set for Nov. 1. Erdogan’s hopes for an executive presidency were dashed in the June 7 elections. He seemingly cannot afford a similar outcome in the upcoming elections. To achieve his goal, he needs to silence the voices of ever-growing opposition and dissension on all sides.

On Aug. 26, an allegation circulated on social media that predicted the raid on Koza Ipek's properties to be followed by police raids on numerous other media outlets: the arch-secularist daily Sozcu, the leftist daily Birgun and the largest mainstream media group, Dogan Holding. Dogan owns the flagship of Turkish print media, Hurriyet, and the high-circulation daily Posta, as well as Radikal and television channels including Kanal D and CNN Turk. The move against the pro-Gulen media outlets lent credence to the social media prediction and triggered a wide response, even from anti-Gulen circles.

The daily Sozcu’s columnists left their columns blank Sept. 1 in protest against the government’s actions. Sozcu is the second-largest mass-circulated daily in Turkey and has a staunchly anti-Gulenist editorial line.

The development also coincided with the imprisonment in Diyarbakir of British journalists from Vice News. The unprecedented arrest of the British journalists — on accusations they were linked to terrorist group Kurdistan Workers Party — aroused outrage among international institutions ranging from Amnesty International to the prestigious Committee to Protect Journalists.

While Erdogan’s government exercises oppressive measures on any media outlet that it thinks is in opposition, no matter what political camp or country they belong to, docile media such as the dailies Milliyet and Vatan benefit. Both papers are owned by the Demiroren family, which became notorious for firing journalists who displeased Erdogan. One recent such victim is Gursel, the influential and respected columnist mentioned above, known well by Al-Monitor readers!

The firing of a group of veteran journalists at Milliyet followed Gursel’s departure. Ironically, on the day Koza Ipek media outlets were raided by police, there was other interesting news that could not go unnoticed: French oil giant Total sold some of its retail properties in Turkey to the pro-government Demiroren family for 325 million euros ($365 million)!

That is the general state of Turkey’s media affairs two months before the Nov. 1 elections. To borrow from the seminal novel of Milan Kundera, this is actually the unbearable lightness of media in Erdogan’s Turkey today.

On that day, if the fate of Turkey’s democracy is sealed in the negative sense, there might be no media left to report it.