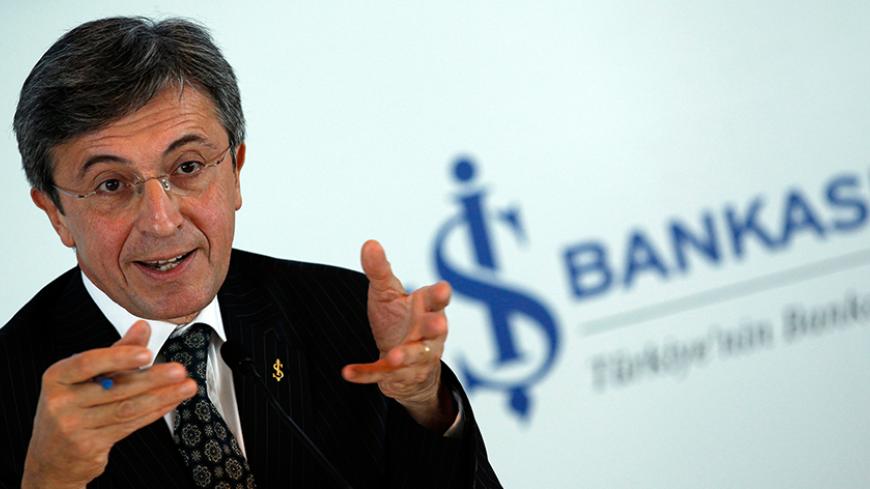 Established in 1924 by the founder of the Turkish Republic, Mustafa Kemal Ataturk, Isbank has been under intense criticism by pro-government media since 2012. The latest attack, in January, came from Yigit Bulut, a key adviser to President Recep Tayyip Erdogan; Bulut openly said that the government must seize the bank.

The debate on Isbank revolves mainly around its partnership structure. Because of Ataturk’s will, 28% of the shares of Isbank belong to the main opposition party, the Republican People’s Party (CHP). Isbank is often drawn into heated political debate because of its partnership structure. Bulut, in a discussion on state television, said, “The CHP can't have an organic relationship within the bank. The bank must immediately be returned to the people and become a public bank.”

Bulut's comments stunned the markets, and the shares of Isbank lost approximately 5% of their value the next day. Isbank's management team was also shocked; there had been earlier calls to expropriate the bank, but this was the first direct statement by a senior official close to the president. A week later, Erdogan received a letter signed by Ersin Ozince, the chairman of the board of directors, and Adnan Bali, the general manager of Isbank. According to information obtained by Al-Monitor, the letter emphasized the deep-rooted history of the bank and expressed discontent with Bulut's statements.

Ozince told Al-Monitor, “I do not wish to say anything specifically on this issue.” But he did not deny sending the letter to the president. Ozince hinted that further steps had been taken, saying, “We are taking all possible corporate actions. Our field of operations is within the jurisdiction of the Banking Regulation and Supervision Agency and the Capital Markets Board. Turkey is a state of law — necessary actions must be taken. We are taking the necessary legal action.” Ozince added that Turkey’s legal process is slow, and therefore lacks deterrence; if need be, action also can be initiated in the international legal arena.

Although the bank has become a target for Erdogan’s associates, Ozince does not believe that the president personally is targeting Isbank. “I don’t think that the issue is about the president. Isbank achieved its strong status in the era of the Justice and Development Party [AKP] government after 2001. During Mr. Erdogan’s term as prime minister, the market value of Isbank went up to $25 billion. Our business grew solidly during the AKP government and [the rule of] Erdogan. We have received and still receive the support of our government, especially regarding the foreign and domestic investments of the Sisecam Group [a giant glassworks subsidiary of Isbank]. Mr. Erdogan personally opened many of our facilities,” Ozince said. “I believe that these allegations are malicious and intentional and aim at adversely affecting our banking operations. They may think that we have nobody who cares but we are the bank with the largest popular base.” The shareholding structure of Isbank is diversified — 40% of the shares belong to a foundation of the employees, while 28% belong to the CHP and 32% are publicly traded.

The first indication of the intentions to seize the bank came from Fuat Avni, a Twitter user who became famous in 2015 because of his sensational insider tweets that were generally accurate. According to Avni's tweet, the government wanted to confiscate the shares of the CHP on charges of corrupt practices. Shortly before these tweets, in February 2015, 63% of the shares of Bank Asya were impounded by the government. Bank Asya was known as being close to the Fethullah Gulen movement; Gulen is a US-based preacher who earlier had been a close ally of Erdogan. In May 2015, the bank was completely seized. The same year, the publicly traded company Koza-Ipek Group, known for being close to the Gulen movement, was seized. The battle between Erdogan and Gulen started with corruption and bribery operations against AKP officials on Dec. 17 and Dec. 25, 2013, which were said to be staged by state prosecutors and police officers close to the Gulen movement.

The CHP, despite owning 28% of the shares of Isbank, does not receive an income from these shares. The dividends accrued to the CHP shares go to the Turkish Language Society and Turkish Historical Society as per Ataturk's will.

Ozince explained that both the banking regulations and the law on political parties do not allow the CHP to make money from its shares, saying, “The CHP only has a representative function. Any further allegations or perception management efforts are illegal [under Turkey's finance laws].”

Allegations against Ozince and Isbank are not confined to the CHP shares. The pro-AKP daily Yeni Safak has claimed that Cumhuriyet journalist Can Dundar was illegally given a loan with 0% interest. Dundar is on trial in a case involving news stories that Turkey was providing arms to jihadi groups in Syria. Some other media claimed Ozince’s salary was $10 million.

Ozince rebutted the reports on illegal loans, and said the total salaries of all the board members of Isbank do not add up to even $1 million.

Finally, Ozince is also accused in an investigation involving Petrol Ofisi, which Isbank had a stake in. The trial is related to alleged fuel smuggling by Petrol Ofisi between 2001 and 2007, and the court has been asked to impose a 23-year prison term on Ozince, who had been part of the company's management at the time. At the same trial, Aydin Dogan, the chairman of Dogan Holding — the largest media group in Turkey, which is involved in an acrimonious dispute with the government — is accused of being the leader of a crime organization. Isbank sold 50% of its Petrol Ofisi shares to the Dogan Group in 2005.

The continuing dispute and negative reporting that recently have gained momentum have had an adverse impact on the share performance of Isbank. Although the Istanbul Stock Exchange 100 Index has increased by 14% since the beginning of 2016, Isbank shares have taken a loss of more than 1%. Ozince said, “While they are discrediting Isbank, they are violating the rights of domestic and international investors,” noting that more than 100 foreign investors have continued to trade the bank's public shares.

The accusations and news stories on Isbank have impaired expectations for the banking sector, just as when Bank Asya was in the headlines.

Atilla Yesilada, a Global Source analyst, told Al-Monitor, “Pressure on Isbank has risks that cannot be compared with others. Formerly seized banks or companies were relatively small. However, Isbank is a mammoth mainstream company. Seizing this company will completely alter the perception of foreign investment in Turkey. Turkey will become [President Vladimir] Putin’s Russia.”

According to Yesilada, the government’s increasing need for loans may be behind the increasing pressure on Isbank. He added, “Turkey has mega-investment projects and we are having difficulties in finding foreign credit for them. These mega projects are mainly funded by public banks that are at the limits of their capacity to extend credit. This could be the reason behind their craving to get their hands on the balance sheet of Isbank.”