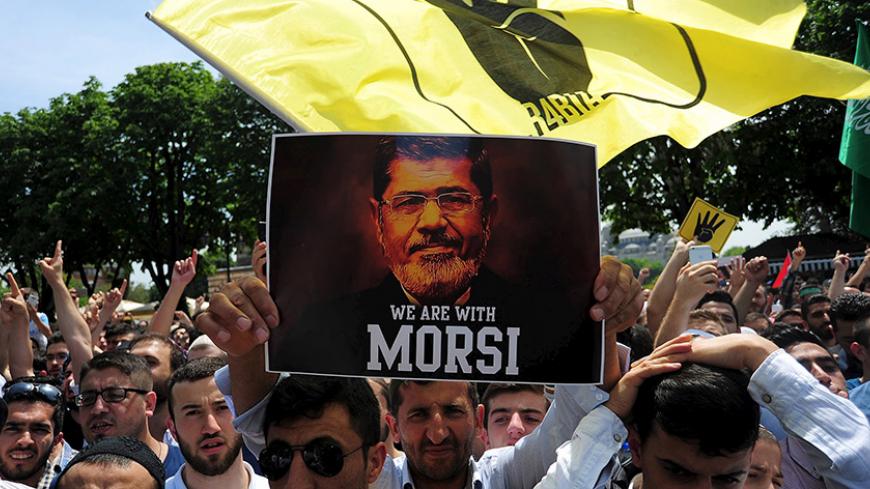 Pro-Islamist demonstrators hold a poster of former Egyptian President Mohammed Morsi during a rally in support of him in front of the Haghia Sophia museum at Sultanahmet square in Istanbul, May 24, 2015. - REUTERS/Yagiz Karahan

“The world is shocked! Death sentence for president who got 52% of the vote.” This was the headline Turkey’s mass-selling daily Hurriyet used on its website — with a photo of Turkish President Recep Tayyip Erdogan — after ousted Egyptian leader Mohammed Morsi was sentenced to death May 16. The story unleashed a fierce onslaught on the paper by both Erdogan and Prime Minister Ahmet Davutoglu.

Adding to the pressure, a lawyer named Rahim Kurt, who turned out to have sought a berth on the Justice and Development Party’s (AKP) ticket for the June 7 elections, lodged a criminal complaint against Hurriyet, demanding that Editor-in-Chief Sedat Ergin and online editor Izzet Dogan be arrested and tried on terror-related charges. The lawyer said Hurriyet “incited hatred and enmity among the people, encouraged armed action against the Turkish government, praised crime and criminals and spread terrorist propaganda.”

The Dogan media group, which owns Hurriyet and other papers, magazines, TV channels and radio stations, is no stranger to the government’s wrath. Several years ago, the company ended up with a giant tax penalty after a tax inspection that followed its close coverage of AKP-related corruption allegations. Boss Aydin Dogan had to sell the group’s Milliyet and Vatan newspapers, the Star TV channel and his shares in Petrol Ofisi, a leading fuel distributor.

Ironically, the Dogan media group had backed the AKP in the 2002 elections that brought the party to power, and then lent support to Erdogan’s premiership, which he had failed to assume immediately due to legal obstacles. It stood behind the AKP also in 2008 when Turkey’s chief prosecutor made an unsuccessful bid to have the party outlawed at the constitutional court, running a full-page interview with Erdogan a day before the court’s verdict that clearly demonstrated support for the government.

Why did Hurriyet’s Morsi story anger Erdogan? The president believed the paper was sending him a veiled threat that he, too, could face the gallows. Ever since, he has mounted furious attacks on the Dogan group and its boss in almost-daily rallies ahead of the polls.

In response, Hurriyet published an open letter to Erdogan, asserting that the story had nothing to do with him, that he himself had made the same comment on Morsi’s death sentence and that any covert call for a president’s execution would be a “disgrace.”

It is no coincidence that the government’s scathing rows with the Dogan group erupt typically ahead of elections. In the latest wrangling, Erdogan is blowing things out of proportion and keeps the conflict going because he believes that similar rows ahead of elections in 2007, 2009, 2011 and 2014 boosted his vote. The latest onslaught on the Dogan group seems to be a tactic designed to contain the fall in the AKP vote seen in public opinion polls.

Beside the pressure on the Dogan group, anticipation is building up that the government could seize media outlets owned by followers of US-based cleric Fethullah Gulen. Once close allies, the AKP and the Gulen movement fell out in December 2013 when the government blamed massive corruption probes targeting the AKP on Gulenist police and prosecutors. The Gulenist media have grown staunchly critical of the government since the breakup.

The Gulen movement is now the subject of a judicial investigation on charges of being a terrorist organization. As part of the probe, a prosecutor has asked the Information and Communication Technologies Authority to block Gulenist news sites and remove Gulenist TV channels from the TURKSAT satellite on the grounds they spread terrorist propaganda, stoking fears that government seizure of Gulenist media may be imminent.

The government’s onslaught on the Dogan group and Gulenist media could well be seen as an effort to shape a monophonic, pro-government media ahead of the polls.

On May 22, veteran columnist Fehmi Koru, who is close to both Erdogan and his predecessor Abdullah Gul and is known to have acted as an emissary between Ankara and Gulen, decried the “seizure” plan and urged the government to avoid such a step, warning that it would constitute a constitutional breach and discredit Ankara in the international arena.

Journalist Dogan Tilic, a senior member of the Association of European Journalists and a lecturer at Ankara’s Middle East Technical University, painted a rather pessimistic picture of the Turkish media. “To say that the problems of media and journalism in Turkey began with the AKP would be unfair. After 1980, media ownership became dominated by conglomerates doing business in myriad other sectors, which led them to seek closer ties with the government,” Tilic told Al-Monitor.

“Yet before the AKP, Turkey had a state and parties that functioned according to the system of that state. So, basically there was an order made up of a state and its parties. With the AKP, however, this transformed into the order of a party and a state that functions accordingly. As a result, making enemies out of the media in general and the Dogan group in particular ahead of every election has become easier for the AKP, which, by the way, enjoys the loyalty of an extensive media network. And beyond becoming easier, this has brought them votes,” Tilic said.

The Freedom for Journalists Platform, which groups various media organizations, issued a stern statement last week, denouncing the president’s and the prime minister’s attempts to bully media institutions and journalists.

Ahmet Abakay, the chairman of the Contemporary Journalists’ Association, offered the following assessment to Al-Monitor: “The people who currently run the state, including the president and the prime minister, see freedom of expression as an obstruction for themselves. The president holds the record in suing journalists and writers. Most recently, he opened a war on the Dogan media group on the presumption that the Hurriyet story was an insinuation against himself. The president and the ruling party are using the state’s means to crush and annihilate the opposition. What is equally alarming is that many journalists and writers keep silent in the face of this troubling trend to avoid falling out with the government. The Gulenist media, which was until recently their partner in running the state, is now … also under the president’s attacks. About 200 journalists have spent time in jail under the AKP, including 23 who remain behind bars.”

With the June 7 polls barely two weeks away, the Turkish media’s outlook is gloomy. An election outcome that keeps the AKP in power would bode even tougher times for the Dogan group and Gulenist outlets amid increasingly gloomier prospects for the Turkish media.