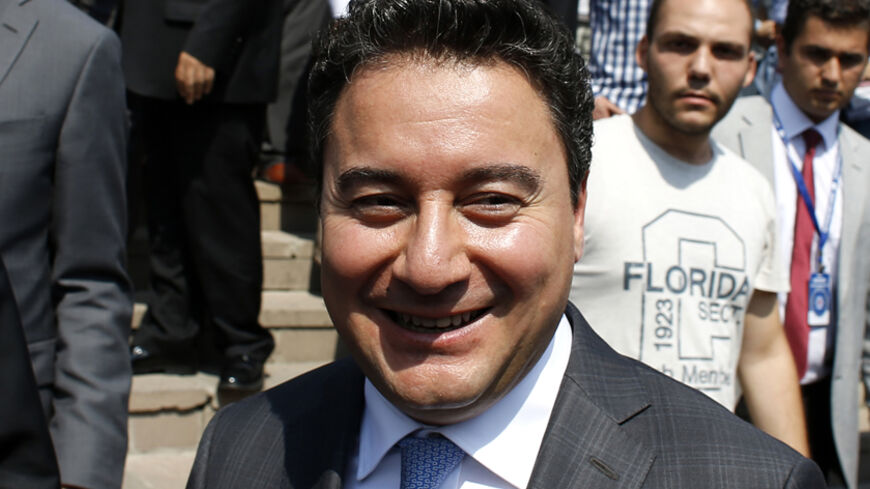 Ali Babacan, deputy prime minister in charge of the economy, retained his post in the new Turkish Cabinet, announced Aug. 29 by Ahmet Davutoglu, Recep Tayyip Erdogan’s successor in the prime minister’s seat. This comes as good news for international financial investors, who credit Babacan as a guarantor of Turkey’s economic policies. It is also good news with regard to sustained economic stability at a time when risks are on the rise. Finance Minister Mehmet Simsek, too, retained his post.

Yet, if one had to come up with a headline to reflect the political meaning of Babacan keeping his post, “The Erdogan-Davutoglu duo can’t afford forfeiting Babacan” would have been a good one, followed by, “In a sign that the government cannot afford losing international investor confidence at a time of economic volatility, Babacan retains his post in the Davutoglu Cabinet, even though he often attracted former Prime Minister Erdogan’s ire, was vilified for resisting political interventions in the economy and pressures on the central bank for politically motivated rate cuts and allegedly came to the brink of quitting the government.”

On Aug. 29, before the new Cabinet line-up was formally announced, a story in the Cumhuriyet daily, headlined “Davutoglu persuades Babacan to stay,” contained the following information: “Deputy Prime Minister Babacan is said to have conveyed his desire to quit the Cabinet while Erdogan was still prime minister because of the central bank tensions. Davutoglu has now persuaded Babacan to stay, sources say. Babacan reportedly insists that Finance Minister Mehmet Simsek, with whom he has worked in harmony, should also stay in the Cabinet.”

Here is an overview of some of the developments, reported in the media, which brought Babacan to the brink of quitting his job and required the subsequent effort to have him stay:

In July 2013, Erdogan appointed Yigit Bulut, a columnist and a financial analyst renowned for his eccentric views and conspiracy theories, as his chief economic adviser. The move irked Babacan. Bulut had attracted international media attention during the Gezi Park protests the month before, claiming that Germany’s airline Lufthansa was behind the protest wave. His fame grew further as he soon claimed, “Efforts are underway at several centers to kill Erdogan by the way of telekinesis.”

In the wake of the Dec. 17 bribery and corruption probe against government members and cronies, the Turkish lira slid sharply against the dollar, but the central bank dragged its feet in raising interest rates in response. The delay was reportedly caused by disagreements between Babacan and Bulut. The Taraf newspaper would later report that Babacan, trying hard to convince Erdogan on the need for a rate hike, was "shocked" when Erdogan retorted, “Well, Ali, Yigit doesn’t say so.”

In August, Bulut and Babacan were again at odds. The issue this time was Bank Asya, owned by members of the Gulen religious community, which the Justice and Development Party (AKP) government targeted in its “civil war” with the Gulen movement. On Aug. 6, Babacan revealed that the public-owned Ziraat Bank was in talks to acquire the troubled Bank Asya, but later in the day Bulut denied any “initiative or plan for the acquisition of Bank Asya.” As a result, the bank’s shares, which had rallied on Babacan’s statement, slumped 9% on Aug. 7, and the Istanbul stock exchange suspended trading for the bank’s shares.

Just a few weeks earlier, the usually reserved Babacan had delivered unprecedented warnings and criticism to the government. “I’d like to emphasize that isolationist policies that shut foreigners out or look abroad for some imaginary explanations will pose an extremely high risk to the economy,” Babacan said on July 8 at a gathering of the Turkish Capital Markets Union. “Turkey today has no other option than being an open economy. Therefore, [we need] an economic and financial structure built on credibility that is in harmony with the world and integrated with the world. … Populism is a common malaise in politics and we must not fall into this trap,” he said.

The same day, a pro-government website, reputed for smear publications designed to threaten, harass and intimidate government opponents, ran excerpts from a scathing article about Babacan, which described the minister as “a joint project of the Gulen community, the Bilderberg group, the Dogan Media Group and the Interest Rate Lobby.”

Senior AKP member Numan Kurtulmus, who was appointed deputy prime minister on Aug. 29, has openly indicated he disagrees with Babacan’s advocacy of central bank independence. “Following the defeat of the military tutelage, the central bank’s tutelage is next in line,” he declared on June 23.

Babacan will be absent from parliament — and therefore from the Cabinet — after the 2015 elections, because he is barred from standing in the polls according to AKP internal rules that limit parliamentary membership to three consecutive terms.

Kurtulmus, who served as the AKP’s deputy chair responsible for the economy under Erdogan’s chairmanship, is widely expected to replace Babacan as deputy prime minister in charge of the economy after the 2015 elections, which the AKP is again likely to win. It will be interesting to see whether Kurtulmus will wait nine months for his turn or, emboldened by Erdogan’s support, will move to exercise tutelage over Babacan in the coming days.