Turkey’s conflicting visions of the economy

There is a growing conflict in Ankara between two distinct views of the economy: the rational/conventional one led by Deputy Prime Minister Ali Babacan and the conspiratorial/revisionist one led by Yigit Bulut, senior adviser to President Recep Tayyip Erdogan. 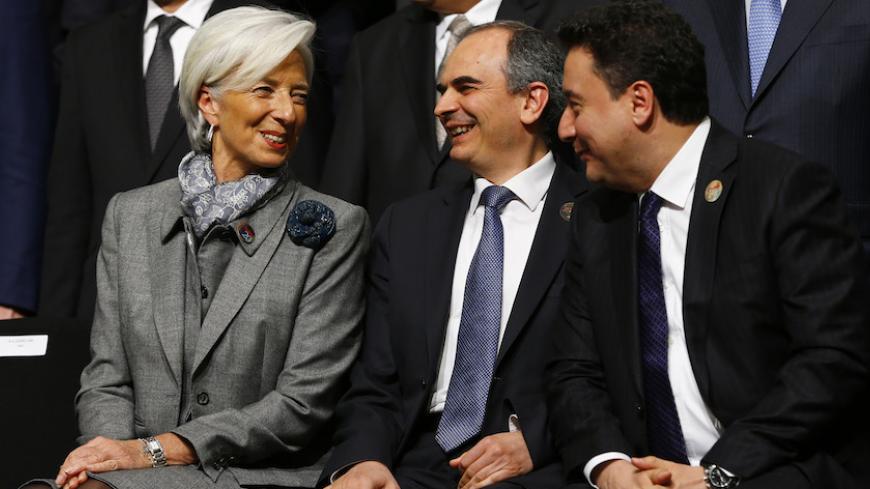 Turkey's daily Sabah, a top-selling newspaper, on March 6 published an article titled, “The exchange rate conspiracy of the interest rate lobby." The story recounted a conspiracy theory arguing that the rapid increase of the value of the US dollar against the Turkish lira was a carefully crafted plot against President Recep Tayyip Erdogan’s "New Turkey” in the lead-up to the general elections in June. According to the article, the co-conspirators were “London bankers, their local collaborators and the parallel [i.e., pro-Gulen] media.” Moreover, the head of Turkey’s Central Bank, Erdem Basci, was helping these evil powers by “doing nothing.”

The Turkish media is often full of such overblown news, but Sabah is no ordinary paper — it is the most dedicated mouthpiece of Erdogan. This particular conspiracy theory is no ordinary one as it has been repeatedly promoted by both Erdogan and his close circle. No wonder on the same day the Sabah article was published, Erdogan asserted that the dramatic rise of the value of the dollar against the lira was connected to “the work of the interest rate lobby.”

Meanwhile, however, the very masters of the Turkish economy — Prime Minister Ahmet Davutoglu, Deputy Prime Minister Ali Babacan and Finance Minister Mehmet Simsek — met in New York March 4-7 with the very conspiratorial powers condemned by the pro-Erdogan media. Their New York hosts included investors from Goldman Sachs, Citibank and Merrill Lynch. As Reuters reported, the goal of the Turkish team was to “soothe the nerves of New York investors, who hold more than a fifth of the main Turkish stock index.” But this was no easy task, because the investors were “rattled by Erdogan’s demands that the Central Bank, which is battling inflation as well as the weak lira, must deliver sharper interest rate cuts.”

This confusing picture about the management of the Turkish economy is a reflection of the growing visible conflict in Ankara between two distinct camps.

On the one hand, there is the Babacan camp. Babacan, a graduate of Northwestern University, has been the caretaker of the Turkish economy since the Justice and Development Party (AKP) came to power in 2002. He is respected and trusted by the business community as a symbol of rationality and stability. Simsek, who worked for Merrill Lynch in London for seven years before assuming office in Ankara in 2009, is on the same level as Babacan. One of their key trustees is Basci, a graduate of Johns Hopkins University. Davutoglu has been supporting this team since he became prime minister in August 2014, right after Erdogan’s election as president. In fact, word has it in Ankara that Davutoglu insisted on keeping Babacan in his seat before accepting Erdogan’s offer to become the premier, because he knew that Babacan would safeguard the economy.

On the other hand, there is the Yigit Bulut camp. Bulut is largely unknown internationally, and his impressive ascent to power is a surprise to most Turks as well. Until 2009, when the AKP’s dominance in Turkey was uncertain, Bulut was a newspaper columnist with eccentric conspiracy theories and strongly anti-AKP views. In the next few years, however, he still believed in the eccentric conspiracy theories but became a passionate AKP supporter. In June 2013, when the Gezi Park protests targeted Erdogan, he invented the "interest rate lobby" conspiracy, which quickly became the dominant theme in Erdogan’s narrative. Accordingly, the protesters were manipulated behind the scenes by powerful secular capitalists who hated Erdogan for lowering Turkey’s interest rates. In July 2013, Erdogan made Bulut his top adviser for the economy.

The Bulut camp is supported by only a few economists but is strongly endorsed by Erdogan. Moreover, Minister of Economy Nihat Zeybekci seems to be of a similar persuasion as well. This camp has three fundamental disputes with the Babacan camp.

First, to date, neither Babacan nor any other name in his camp used the term interest rate lobby, which suggests that they do not share this deeply conspiratorial view of the world. Former President Abdullah Gul, who is Babacan’s real mentor, also had dismissed Erdogan’s conspiracy theories as “third world politics.” But this makes the Bulut camp only more suspicious of the patriotism of the Babacan camp. Erdogan’s recent accusation of “high treason” toward Basci was a case in point.

Second, the Erdogan-Bulut camp also believes in a revisionist theory of economics, which supposes that lowering the interest rates of a currency will also lead to lower inflation and do wonders to the overall economy. The universal textbook knowledge of the economy, however, suggests that the link between interest rates and inflation is quite the opposite. No wonder the previous head of the Central Bank, Durmus Yilmaz, reacted to Erdogan’s statements last month, saying that to believe in it we had to trash “the 350-400-year-old economic literature … [and] burn the books of Adam Smith or John Maynard Keynes.”

My sense is that Erdogan’s aversion to interest rates comes less from a solid theory of economy but more so from Islam’s traditional condemnation of usury, a theme that resonates very well in his Islamist base.

Finally, some observers think that Erdogan’s insistence on lowering the interest rates of the lira on the eve of the general elections is linked with his short-term gain in the elections. If the Central Bank lowers the interest rates dramatically, then this will lead to a short-lived vitalization of investments and thus the job market, despite disastrous consequences in the long term. Since a crushing AKP victory in this election is a must for Erdogan, for his super-presidency plans, the Bulut camp notes that he focuses on the short-term gain. The Babacan team, however, worries about the long-term health of the economy.

The tension between these two camps in Ankara has lately placed Turkey in a vicious cycle. Erdogan, along with his propaganda machine, constantly blames the Central Bank, and more implicitly Babacan, for not lowering the lira’s interest rates. This causes doubts about the rational management of the Turkish economy, leading to a further decline in the lira’s value against the dollar. Seeing this decline, the Erdogan-Bulut camp gets only angrier at the interest rate lobby, and further attacks the Babacan camp, which they see as somehow compromised to the nefarious powers out there.

It seems Davutoglu, Babacan and Simsek met US investors in New York to do some damage control caused by this bizarre tension in the Turkish capital. They, along with Basci, should be congratulated for their determination to do their job properly, despite all the bilge thrown at them at home. Yet, how long they will be able to continue is a question that nobody can answer with certainty.