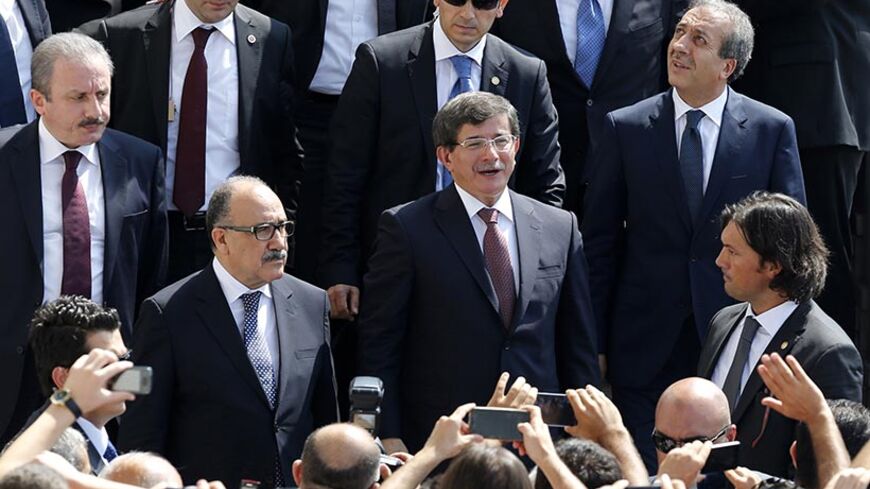 On Aug. 27, Turkey’s incumbent Justice and Development Party (AKP) held its major congress and elected its new leader after the ascendance of Recep Tayyip Erdogan to the presidency: Ahmet Davutoglu. At the same event, Davutoglu gave a long address to thousands of party members in the hall, and millions of Turks on TV, outlining his vision for the future. He promised nine “restorations” regarding various issues in domestic and foreign policy — such as restoring justice, fighting corruption and drafting a new constitution. The “restoration” that made most sense to many observers, however, was related to the economy.

Davutoglu said, “The Turkish economy was in ruins in 2001 [right before the AKP]. A country then seen as a sick man realized an economic revolution. The road from the sick man of 2001 to the strong economy of today was made possible by a rational economic policy.”

The term “rational economic policy” was meaningful, because in the past two years, the observers of the AKP have increasingly noted a rift within the party. The first came being the “rational” camp led by Minister of Economy Ali Babacan, Finance Minister Mehmet Simsek and the head of the central bank, Erdem Basci, a key bureaucrat. The “ideological” camp, on the other hand, was led by Numan Kurtulmus, deputy chairman of AKP and the former the leader of the short-lived Has Party, which was defined as the voice of the “Islamic left.” On a less serious level there was also Yigit Bulut, a former newspaper columnist who Erdogan appointed as his adviser in 2013.

The first camp insisted on keeping up with the liberal, globalist, market-friendly economic policies that Turkey implemented once the AKP came to power. (And, in fact, inherited from the key economic reforms realized right before the AKP’s ascendance by Kemal Dervis, a former World Bank official and former head of the UNDP.) In this view, Turkey was successful due to integration with the world, welcoming foreign investment and refraining from populist economic policies that could infringe on “financial discipline.”

The second camp, however, saw these liberal policies as subservience to “global capitalism” and the “interest-rate lobby” — a putative enemy-behind-the-scenes that supposedly wanted to force government to have high interest rates and, when the government disobeyed, sparked social unrest such as the Gezi Park protests. This view was clearly inspired by the “anti-imperialist” themes that are strong within Turkey’s left-wing and nationalist movements. Some of the pro-AKP writers who defended this view referred to Marxist theorists such as Andre Gunder Frank, who defined the global economy as a zero-sum game and saw the economic development of the third world in its “independence.”

The tension between these two camps within the AKP became apparent in the face of the Gezi Park protests of June 2013. To counter these public demonstrations, Erdogan needed propaganda tools, and conspiracy theorists such as Bulut gave him the best ones. Bulut argued that the protesters in Turkey’s streets were in fact agents of Lufthansa, which had supposedly tried to sabotage Istanbul’s third airport. Since then, Bulut has been a very vocal voice in the pro-AKP media and has thrown thinly veiled jabs at Babacan. Some speculated that Babacan would be replaced by Bulut in the next Cabinet.

However, a careful eye could notice Erdogan's double-edged strategy: He needed the conspiracy theories of Bulut and the like for domestic propaganda, while he needed Babacan and his team for the rational management of the economy. Erdogan knew, after all, that his majestic success was largely based on the economy, which does not rely on natural resources such as oil and gas but on a delicate balance of markets.

As the news media reported, Davutoglu, as Erdogan’s heir to the prime ministry, was also very aware of the importance of Babacan, who has become a symbol of trust for foreign investors and rating companies. That is why he reportedly insisted on keeping Babacan in his seat in the new Cabinet.

On Aug. 29, the news confirmed the expectations: Prime Minister Davutoglu announced his new Cabinet, and Babacan remained in his seat as deputy prime minister and the manager of the economy, as did Finance Minister Simsek. Kurtulmus entered the Cabinet, too, as one of the other four deputy prime ministers in charge of the Directorate of Religious Affairs and Turks Abroad.

Another notable appointment in the Davutoglu Cabinet was the new foreign minister, Mevlut Cavusoglu, who used to be the minister responsible for relations with the European Union. Cavusoglu’s seat was filled by Volkan Bozkir, a former diplomat who worked with previous leaders such as former presidents Turgut Ozal and Suleyman Demirel, and who certainly does not come from the AKP’s Islamist core. Add to this the “importance of the European Union accession process” that Davutoglu underlined in his speech to parliament, and you will get a sense of a bit more Western-friendly outlook compared to the recent anti-Western narrative in AKP circles.

In short, at least in its beginning, the prime ministry of Davutoglu gives the hope of a return to the more rational, pragmatic, globalist policies that used to define the AKP until the anti-liberal and anti-Western drag of the past two years. Dashing this hope right away, and insisting that the AKP is inevitably destined to grow more ideological, would be only ideological.