AKP to its moderates: Don't let the door hit you on your way out

A number of moderate Justice and Development Party veterans who dared to express opposition to the course set by Recep Tayyip Erdogan have been excluded from the party’s central committee. 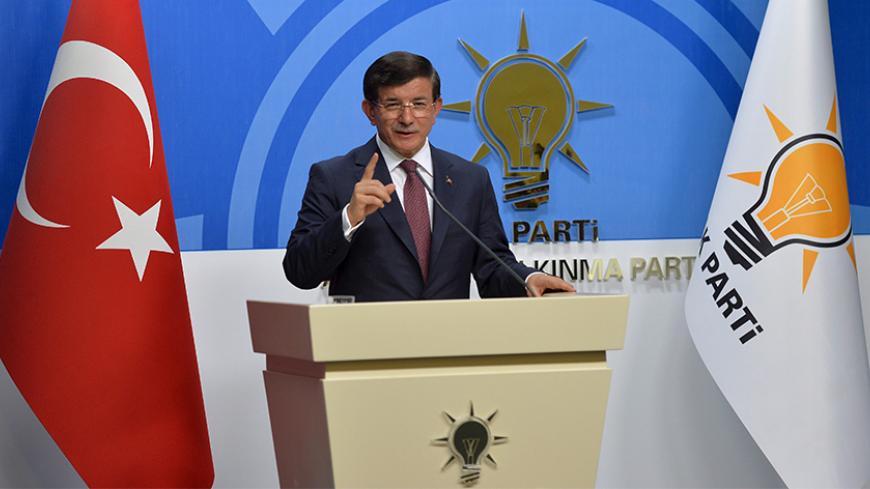 During Sept. 12-13, Turkey’s ruling Justice and Development Party (AKP) held its annual convention at a gigantic hall in Ankara. It was the first convention at which the party’s “eternal leader,” Recep Tayyip Erdogan, was not physically present, because he is, technically speaking, a “nonpartisan president,” according to the Turkish Constitution. Yet in fact, the spirit of Erdogan was everywhere, putting its mark on the party more decidedly than ever. As a result, some key AKP veterans who dared at times to disagree with Erdogan and are viewed by some outside the party as “moderates” were excluded from the party’s decision-making central committee. Meanwhile, hawks and loyalists received promotions.

The convention is something that the AKP, like other Turkish parties, holds every year, bringing together more than 1,000 delegates from across Turkey to elect a party chair and central committee. In the AKP, the latter consists of 50 members who meet routinely to determine policy. In reality, however, the system works in a more top-down than bottom-up manner. In other words, the delegates and the central committee do little more than endorse the decisions of the party leader.

This year, with Erdogan looming large as eternal leader, it was taken for granted that the current prime minister, Ahmet Davutoglu, would be re-elected party chairman. A few days before the convention, however, stories leaked to the media about tension between Davutoglu and Erdogan and the president having a “Plan B,” which called for blessing one of his loyalists, former Transportation Minister Binali Yildirim, as the new party chair. Davutoglu had reportedly compiled a list of names for the central committee, but Erdogan did not like it and therefore proposed his own. When Davutoglu resisted, Erdogan’s men had some 900 delegates sign a blank sheet of paper, putting them at the ready to support Yildirim should Erdogan give the sign. Davutoglu backed down at the last minute. In the end, Erdogan’s list was approved, and crisis was averted. The central committee shaped by Erdogan conspicuously lacks a number of key people whom Davutoglu had planned to keep on his team.

Bulent Arinc is one of the AKP's three founding pillars, along with Erdogan and Abdullah Gul. Arinc has been a voice of moderation and balance in the party for years. Some of his conservative statements on women’s role in society rightly angered feminists. Besides that, however, he opposed the witch hunt for secularists during the AKP's second term, opposed Erdogan’s hawkish stance against the Gezi Park protesters in 2013 and more recently dared to criticize Erdogan for violating the constitution and pushing for one-man rule. “We were a party of ‘us,’” Arinc said in a much-referenced interview published Sept. 11, “but now we have turned into a party of ‘me.’”

Ali Babacan and Mehmet Simsek are two key ministers who quite successfully oversaw the Turkish economy for many years. In particular, Babacan, the only AKP member to have kept a ministerial position since 2002, emerged as a symbol of economic rationality and stability among the business community, including foreign investors. Both men recently fell from grace, because they do not share Erdogan’s conspiratorial views about the “interest rate lobby” and defended the independence of the central bank at a time when Erdogan accused it of high treason.

The departure of Babacan and Simsek is a signal that a new economic mentality might come to guide the AKP, one characterized by a belief in Western conspiracies and a more nationalist, “independent” model. Erdogan’s key economic adviser (and chief conspiracy theorist), Yigit Bulut, announced as much in his Sept. 14 newspaper column, happily writing, “The neoliberal submissive era is ending.” Erdogan’s son-in-law, Berat Albayrak, who is known to be like-minded and was elected to the central committee, is expected to be influential in bringing about this “new era” in the economy.

Sadullah Ergin was AKP justice minister from 2009 to 2011, a time when the AKP implemented liberal legal reforms applauded by the European Union. Ergin was known to be critical of the deviations from the rule of law in the past two years. Besir Atalay, one of the key architects of the “peace process” with the Kurdistan Workers Party, the Kurdish nationalist militia, was also considered among the moderates.

All these notable moderates have longed for the earlier years of the party and have not shared Erdogan’s obsession with a new constitution centered on a “presidential system.” They all have something else in common — sympathy for and ties to former President Gul, who has been pushed aside by Erdogan because of his more liberal political views.

Meanwhile, among those applauded at the party convention was the new rising star of the AKP, Abdurrahim Boynukalin, a 28-year-old parliamentarian and head of the AKP’s youth organization. Boynukalin had made the news Sept. 7 when he led a large group of Erdogan supporters who attacked the offices of the daily Hurriyet, breaking windows to protest a report that they deemed an “insult to Erdogan.” During the violent protest, Boynukalin condemned Hurriyet's publisher, the Dogan Media Group, as a “terrorist organization,” and vowed that it would be “kicked out” of Turkey after the upcoming November elections. The AKP has not apologized for the incident, and in contrast, the militant Boynukalin was promoted at the convention with his appointment to the bureau tasked with formulating procedures.

In short, the AKP that implemented spectacular liberal reforms that aligned Turkey with the European Union is long gone. The moderates, mostly relics from those memorable years, are withering away, one by one. Most of those who remain on board the ship and all of those currently embarking are defined by a simple criterion — loyalty to Erdogan and hostility toward his foes.

The AKP really has become “a party of ‘me,’” as Arinc asserted, a very ambitious, assertive and angry me.