Critical voices are getting louder inside Turkey’s ruling party, but can the dissidents mount a real challenge to President Recep Tayyip Erdogan? 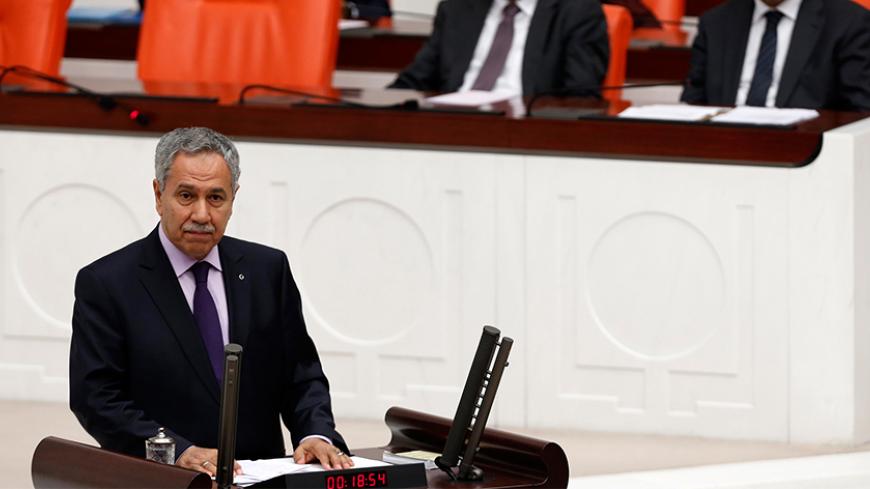 The main talk of the town in Ankara these days is the unrest brewing within Turkey’s unrivaled political powerhouse, the Justice and Development Party (AKP), and its potential impact on the country’s future. Let’s spell it out immediately that the emerging dissent is unlikely to split the party or lead to the creation of a new party by in-house critics unhappy with President Recep Tayyip Erdogan’s overbearing style.

This may sound confusing, given the recent stir triggered by former Deputy Prime Minister and parliamentary Speaker Bulent Arinc, one of the AKP’s top three heavyweights ever since the party’s creation in 2001 until the June elections last year. Why did Arinc rebel? To answer this question, a few reminders are in order.

During his term as deputy prime minister, Arinc clashed publicly with Erdogan on several occasions, including the anti-government protests in the summer of 2013, which broke over a redevelopment project at Istanbul’s Gezi Park. Erdogan, then prime minister, was abroad at the time, with Arinc acting as his official substitute. In a major step to cool the revolt, Arinc announced the plan to demolish the park had been canceled. Soon, however, Erdogan was back home and, embarrassing Arinc, he declared the project would go ahead. Arinc came to the point of resignation but was stopped by President Abdullah Gul, another key AKP co-founder.

On other occasions, Arinc irked Erdogan and his loyalists by speaking out against undemocratic practices and corruption in government ranks. Similarly, he sought to soothe tensions when police raided homes shared by male and female university students, when Erdogan declared a war on the Fethullah Gulen movement or implied that the head of Turkey’s top business group was a traitor. Each time, he was rebuffed or contradicted by Erdogan but chose to swallow the snubs instead of publicly standing his ground. In a memorable outburst in November 2013, he grumbled he had his “own specific weight” in the party, using a physics term to assert he did not owe his political clout to Erdogan. Yet once again he left it there.

The collapse of the Kurdish settlement process was another issue that brought Arinc and Erdogan to loggerheads. In February 2015, government representatives and Kurdish lawmakers, meeting at the Dolmabahce Palace in Istanbul, agreed on a road map for the next stage of the settlement talks. Erdogan, now president, rejected the accord in a pre-election maneuver designed to court the nationalist vote. Arinc, however, lent support to the deal, speaking in his capacity as the government’s spokesman. The controversy grew, and Arinc came under vitriolic fire by Erdogan loyalists. In an unprecedented public exchange, Ankara’s sharp-tongued mayor, Melih Gokcek, an AKP member, urged Arinc to resign, while Arinc slammed the mayor’s “impertinence” and charged he had “sold out Ankara, plot by plot” to the Gulen community, the AKP’s former ally. Furthermore, Arinc vowed to reveal at least 100 shady dealings by the mayor after the June 7 polls. Yet he kept silent after the elections, which marked the end of his parliamentary membership.

On Jan. 29, however, Arinc was back in the spotlight with a television interview in which he insisted the Dolmabahce accord had been concluded with Erdogan’s knowledge, contrary to what the president claims. Arinc spoke of other “domestic problems” within the AKP, saying that “many truths remain in the shadows.” Erdogan retorted without uttering Arinc’s name, calling him “that man” and accusing him of dishonesty.

It was a critical moment. Was Arinc to step back and keep mum again? Not this time. In a message tweeted exactly at 17:25 — timing that was widely interpreted as an innuendo to the corruption scandals that rocked the government on Dec. 17-25, 2013 — Arinc stood his ground in what came as a sign that some AKP members had crossed the fear threshold despite ongoing attacks by Erdogan loyalists. Other prominent AKP figures — former Ministers Huseyin Celik, Sadullah Ergin, Nihat Ergun and Suat Kilic — spoke out in Arinc’s defense.

Celik went further in a Feb. 10 interview with Hurriyet, in which he voiced more criticism of the course the AKP has taken. The emerging wave of dissent now seemed to be systematic, and all eyes turned to Gul, the former president who is also said to be increasingly irked with Erdogan’s rule. In what seemed to be more than a coincidence, Gul was scheduled to meet with Arinc the day of Celik’s interview, reinforcing the impression that some coordinated action was underway.

Erdogan made a maneuver, inviting Gul to his presidential residence for a three-hour dinner designed to send a message of a warm “family reunion.” Gul went along, true to his conciliatory political persona, which detests wrangling and mutiny and opts for calm in dealing with matters concerning the party and its cause. There is no doubt, however, that Gul shares the dissidents’ concerns over Turkey’s deepening domestic and foreign policy problems. Many AKP members have long pinned their hopes on Gul as the man who can stop the downturn.

Fresh out from the presidential palace, Gul came together with Arinc and the four former ministers. What they discussed is as important as the Gul-Erdogan meeting, but little has come to light so far. According to two former AKP lawmakers close to Gul — who, by the way, sounded disappointed — the former president agreed with the dissidents’ concerns but stressed the need to protect the party’s interests and discuss problems internally.

So, what’s the bottom line after all the fuss? In short, Gul softened the climate a little bit. He did this at the expense of annoying some of his associates who complain that in-house critics, too, bear the brunt of the AKP’s current mistakes. It is important to note that those critics are not willing to quit the AKP or to start a new party. What they want is to raise their voices, together with Gul, and stop what they see as Turkey’s drift into troubled waters.

Though Gul seems to have soothed the tensions to some extent, no one has stepped back from their positions. This is evident from the pages of the pro-government press, which offered only meager coverage of the Erdogan-Gul meeting and claimed that Arinc and Celik could be summoned for questioning for alleged links with the Gulen community.

In sum, the unrest within the AKP is not over, and fresh outbursts of dissent should not come as a surprise. AKP members seem to no longer dread the traitor label, which has been used so often and so readily that it has now lost its meaning. True, no dissenting move could open a serious crack within the party as long as Erdogan preserves his current power. But the critics are now more emboldened. One critical trend to watch is the upcoming parliamentary process on drafting a new constitution, which Erdogan hopes will deliver the executive presidency he craves. Prime Minister Ahmet Davutoglu’s stance during this process is likely to be an important factor amid reports that not all AKP members are keen to hand Erdogan more power. That Davutoglu has withheld any criticism of Arinc and his associates in the latest controversy is also noteworthy.