Is AKP heading for a split?

With his strong grip on the ruling Justice and Development Party, Turkish President Recep Tayyip Erdogan has made decisions that could cause a split in the ranks after the Nov. 1 election. 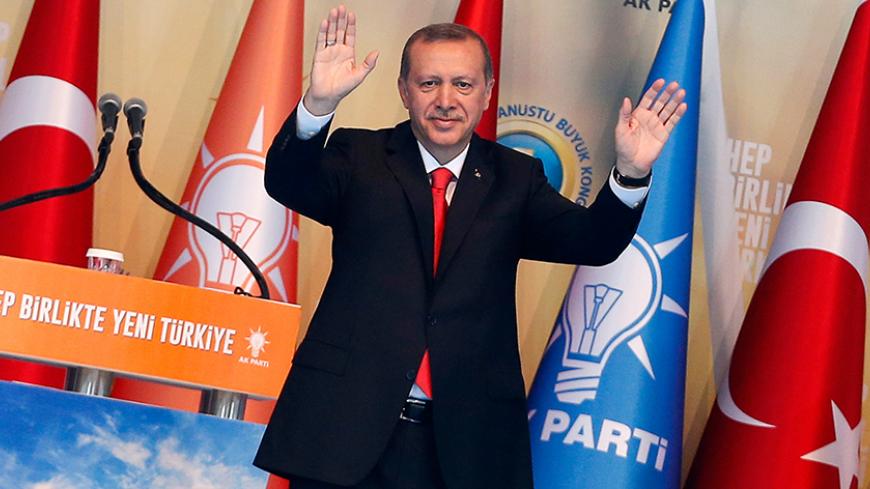 Turkey's then-Prime Minister Recep Tayyip Erdogan greets supporters during his party's Extraordinary Congress to choose a new party leader, ahead of his inauguration as president, in Ankara, Aug. 27, 2014. - REUTERS/Umit Bektas

The Justice and Development Party (AKP) has ruled Turkey single-handedly for more than a decade, winning a solid majority in three successive elections, in 2002, 2007 and 2011.

It not only won every election, it increased its share of votes each time. In 2002, less than a year after it was founded, the AKP became a single-party government, surprising many in and outside Turkey by pulling in around 34% of the votes cast.

The 2007 election followed an acute political crisis. The staunchly secularist Turkish military, which remained the loyal watchdog of Kemalist principles, was still a very powerful element in Turkish politics in 2007. It did not embrace the idea of a president whose wife wore the Islamic headscarf. After the military staged a covert intervention, triggering the political crisis, the AKP emerged even stronger. Thanks to its majority in the parliament, the AKP amended the constitution, changed the rules for electing the president and called for earlier elections. The party won 47% in the elections, which culminated in one of its founding leaders, then-Foreign Minister Abdullah Gul, becoming the 11th president of the republic.

Elections in 2011 led to another stunning victory: The AKP won by 50%. That support emboldened party leader and then-Prime Minister Recep Tayyip Erdogan to seek to transform the political system from a largely ceremonial one to an executive presidency. He was only short a few seats to amend the constitution.

His ambition soared following August 2014, when he was elected president by direct popular vote for the first time. He was elected in the first round with an impressive 52%.

Hence, Erdogan expected the parliamentary elections on June 7 to remove the last bump in his course for an executive presidency by giving him sufficient seats for a constitutional amendment that would provide a legal endorsement for him, even though he had already started to function as a de facto executive president.

Erdogan and his cohorts yearned for a presidency reminiscent of the glorious days of an Ottoman sultan. The AKP would effectively be "the party" of “New Turkey.” That characterization, New Turkey, was coined personally by Erdogan himself and immediately adopted by AKP loyalists. The connotation was unequivocal: Erdogan’s New Turkey would replace the “old one” of Mustafa Kemal Ataturk. Therefore, Islamism would become the unwritten state ideology, replacing Kemalism.

But the fairy tale ended that very day, June 7. The AKP won 258 seats out of 550 and was the leading party, but it did not receive a large enough margin to form the single-party government that Erdogan needed to implement his agenda. The election results made power sharing a necessity.

Unwilling to accept that outcome, Erdogan steered the country toward a "do-over" election, to be held Nov. 1.

Turkey is dangerously polarized and, with the breakdown of the cease-fire with the Kurds, is in a deadly spiral of violence that is claiming the lives of scores of people, from security forces to ordinary civilians in the southeast and east, where Kurds constitute the overwhelming majority of the inhabitants.

These are the circumstances prior to the Nov. 1 repeat election, when Erdogan expects to achieve what he could not in June. This is the context needed to understand the consequences of the AKP convention that convened last week.

The convention was held during the hiatus between the two elections and confirmed Erdogan's strong grip on the party. An ambassador of a leading European country who was among the “VIP” in the congress hall told me, “In fact, it has been a purge congress for all the party’s heavyweights, from former President Abdullah Gul to the new chairman of the party, the current prime minister, Ahmet Davutoglu.”

For Gul and Bulent Arinc, former speaker of parliament and the spokesman of both Erdogan's and Davutoglu's governments, it did, indeed, look like a purge. Gul and Arinc, along with Erdogan, had represented the party's three big guns, “the triumvirate of the AKP.”

Since the convention, that phrase can only be said sarcastically.

Arinc explained his chagrin by saying, in an uncharacteristic veiled criticism directed at Erdogan, “We were a party of ‘us,’ but now we have turned into a party of ‘me.’”

Gul, more than a year after his presidency ended, appeared on a news channel Sept. 17 for a lengthy interview to voice his differences with Erdogan on a number of issues ranging from Turkey’s Syria policy to handling the Kurdish question to Turkey’s democracy deficit. It was the overcautious Gul's first public appearance since he vacated his post for Erdogan.

But why were Erdogan supporters purged, especially Davutoglu, who succeeded Erdogan as party chair? Davutoglu could not get any of his supporters put on the 50-member Central Decision and Executive Board, which is the AKP's decision-making body. He tried, but to no avail. Taha Akyol said in his conservative column in the daily Hurriyet in the aftermath of the congress that one of the leading figures of the party, a former minister, called him and explained that “not a single confidant of Davutoglu could find a way, despite the efforts of the chairman, to the executive board.”

Etyen Mahcupyan, an adviser to Davutoglu, disclosed in an interview with CNNTurk news that Erdogan interfered with the list prepared by Davutoglu, rejecting Davutoglu's candidates and imposing his own hand-picked choices. Mahcupyan alleged that, “For the sake of the party unity on the eve of fateful elections, Davutoglu was obliged to retreat.”

As a result, all of the AKP heavyweights — Arinc, Ali Babacan (the "economy czar," until recently), Mehmet Simsek (finance minister), Besir Atalay (a former minister and vice chairman, who is among the first generation of founders), Sadullah Ergin (the Reformist former minister of justice) — lost their seats on the executive board and were replaced by staunch Erdogan loyalists, including his son-in-law.

A source privy to inside information on the party and who wanted to remain anonymous said, “Erdogan’s tight grip will consolidate his influence over the party over the next two years, but he is alienating a large number of people in the party. This increases the chances of a split within the AKP ahead of the 2019 presidential election. Already-existing divisions within the AKP are likely to become more pronounced in the coming months.”

According to this source, although the board's overhaul demonstrated Erdogan’s control, it will have a negative impact on Turkey’s future after the Nov. 1 election, no matter the result.

An ambassador who is serving in Ankara representing a very influential country told me that a split in the AKP is highly possible. If the Nov. 1 election produces the same results as the one held June 7 — if no one wins enough votes to rule as a single-party government — it will be interpreted as Erdogan's failure, even defeat.

In Turkey's hazy future, only one thing seems certain: Turbulent times lie ahead.