Turkish President Recep Tayyip Erdogan’s fury at the release of two prominent journalists could be only the tip of the iceberg in a simmering power struggle. 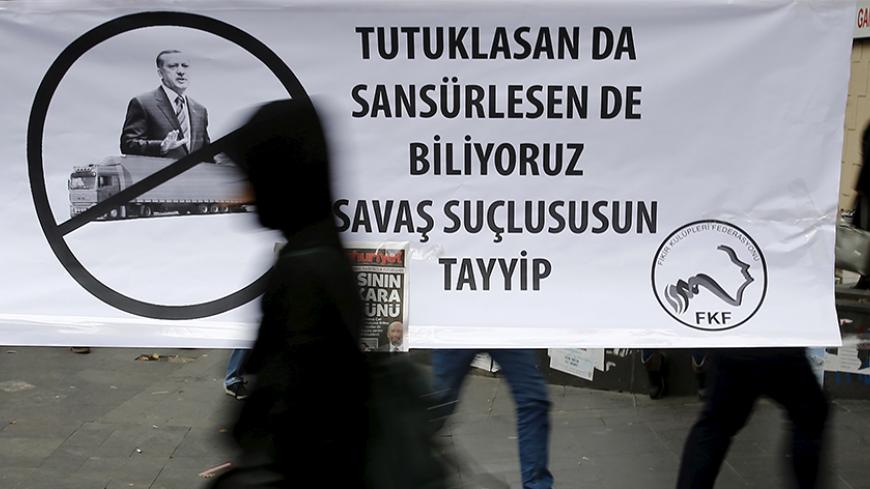 A woman walks past a banner that reads, "Even if you arrest [journalists] or censor [media], we know that you are a war criminal, Tayyip," with a picture of Turkish President Recep Tayyip Erdogan during a protest over the arrest of journalists Can Dundar and Erdem Gul, Ankara, Nov. 27, 2015. - REUTERS/Umit Bektas
Sukru Kucuksahin
March 14, 2016

In late February, Turkey’s Constitutional Court paved the way for the release of two prominent journalists, arrested over reports of Turkish arms shipments to Syria, in a landmark ruling that infuriated President Recep Tayyip Erdogan and sparked fresh internal spats in the Justice and Development Party (AKP). Several days later, police raided a leading business group, Boydak Holding, detaining three owners and a senior executive on charges that the company financed the Gulen movement, a former AKP ally that is now labeled as a terrorist organization. The two events may seem unrelated, but they could well be linked in the context of the in-house dissent brewing against Erdogan in AKP ranks. And the person who provides the link is none other than Erdogan’s former right-hand man, ex-President Abdullah Gul, who is now close to the dissidents.

To better understand how the link works, it is worth recalling what unfolded about a month ago. Former parliament Speaker and Deputy Prime Minister Bulent Arinc, one of the AKP heavyweights who led the party’s creation, emerged from the sidelines of politics with a bang. As Al-Monitor reported Feb. 16, he heaped bold criticism on the AKP and Erdogan, jolting the party. Erdogan hit back, scorning Arinc as “that man” and accusing him of dishonesty. Though the storm seemed to ease after Erdogan and Gul met Feb. 10, Al-Monitor stressed at the time that “no one has stepped back from their positions” and “the unrest within the AKP is not over.” Indeed, less than a month later a new storm was brewing.

It all started with the Constitutional Court’s Feb. 25 ruling, which said Cumhuriyet daily’s editor-in-chief Can Dundar and Ankara bureau chief Erdem Gul had been arrested unlawfully, leading to their release after 92 days behind bars. Politicians of all stripes, including senior AKP members, welcomed the ruling. Few seemed to anticipate Erdogan’s furious reaction, though he had openly called for the journalists’ prosecution after they published reports and footage about the interception of Turkish intelligence trucks in January 2014 while allegedly carrying weapons to Syria.

In an open snub of the judiciary that no other president has ever dared to display in Turkey, and perhaps in the world, Erdogan declared he was not obeying and respecting the Constitutional Court’s decision. He went further, claiming he was trying to protect the constitution that the court had breached, while advising prosecutors to appeal the ruling, ignoring the fact that the Constitutional Court is Turkey’s top tribunal that makes final and binding decisions.

The opposition slammed Erdogan’s outburst as a fresh blow to the rule of law. In a bid to soothe the outcry, government spokesman Numan Kurtulmus argued that Erdogan had expressed only his "personal views," but he was soon countered by a senior presidential adviser who asserted poignantly that Erdogan was “the head of both the state and the government.” This prompted Prime Minister Ahmet Davutoglu to step in. He chided “bureaucrats” for “making such statements” and asserted that he was the head of the government. But as Erdogan stood his ground with a sharpening tone, both Davutoglu and Kurtulmus made U-turns and moved to scold the Constitutional Court. Ironically, Davutoglu cited the same ruling a week later in Brussels to fend off European Union criticism of the mounting onslaught on media freedom in Turkey.

In the meantime, the judges, including court President Zuhtu Arslan, came under vitriolic attacks and were even labeled “traitors” by pro-government quarters. The attackers took care to emphasize the “traitors” had been appointed by Gul. This led Arinc to make a comeback to the scene. He lauded the Constitutional Court and congratulated its president for the ruling, in what came as another follow-up to his show of dissent in early February.

Erdogan retorted from Ghana, where he was on an official visit, insisting the Constitutional Court had overstepped its authority. By now, everyone was convinced that Erdogan’s tirades would not go without consequences. The prevailing anticipation was that a lower court would put the two journalists back in jail. This, however, did not materialize. Yet on March 4, Turkey woke up to a police raid on Boydak Holding, the largest of the so-called Anatolian lions that employs 15,000 people and has its headquarters in Kayseri, Gul’s hometown.

Many saw the raid as a message to Gul. Levent Gok, the parliamentary whip of the main opposition Republican People’s Party, told Al-Monitor, “Most of the [Constitutional Court] judges were appointed by Gul. So Erdogan’s anger is not directed at the judges but at Gul. The Boydaks, too, are very close to Gul. This operation clearly has to do with Gul and is meant as an act of serious intimidation.” According to him, the message to Gul was, “If your people make such rulings, other people of yours will be in trouble.”

Huseyin Celik, another former AKP heavyweight now aligned with Arinc, disagreed. “I, too, believe the Constitutional Court made the right decision,” he told Al-Monitor. But he rejected the notion that the raid on Boydak was intended as a warning to Gul. “True, the AKP government should avoid operations reminiscent of witch hunts. The existence of unhealthy polarizations is also true. But drawing such a political link via the Constitutional Court ruling is impossible. There is neither a ground nor a proof for that,” he said.

Yet, some facts seem to corroborate the opposition’s reading of the events. Most prominently, on the day of the raid, Gul himself said, “The Boydak family is known for its industriousness, honesty and philanthropy. I hope they will not be offended further.” The following day, however, two of the Boydak detainees were sent to prison pending trial. And in an intriguing coincidence, a prominent businessman close to Gul had told Al-Monitor only two days before the raid that “what Gul fears the most is that businesspeople close to him could come to harm.”

The March 4 drama did not end there. Two hours after the raid on Boydak, the government seized the Gulen community’s flagship newspaper, Zaman. One cannot rule out that the double blow contained a message of warning to Gul and his associates that they could share the Gulenists’ fate.

Erdogan’s fury with the Constitutional Court, meanwhile, seemed to continue unabated. On March 11, he reiterated his position in favor of the journalists’ rearrest. In the above context, his stance could be interpreted as an intention to further deepen the conflict with Gul and his associates. The likely calculus behind this strategy is to bully and ostracize the dissidents as a means of rallying the AKP around himself, while pushing his drive for an executive presidency. And as long as he preserves his current power, he will be at ease. But any stumble along the way could completely alter things. The failure of his executive presidency goal will be more than enough for such an outcome.