Turkey remains a parliamentary system under its present constitution, but there is little preventing President Recep Tayyip Erdogan from taking steps to fulfill his ambition of becoming the country’s paramount leader. 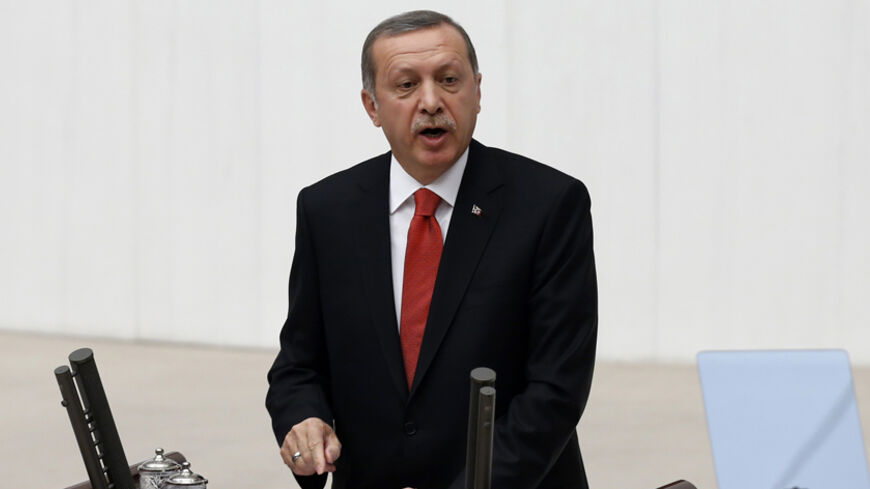 Turkish President Recep Tayyip Erdogan’s latest moves, from the “shadow cabinet” he is establishing, to the crackdown on the Gulen movement’s media outlets — which he is believed to have instigated — show that he is consolidating his power to fulfill his dream of becoming Turkey’s paramount leader for the next decade.

Erdogan, however, does not have it all his way yet, even if the present constitution can be tweaked by him to legitimize his exercise of executive powers. Drafted under military tutelage following the coup on Sept. 12, 1980, the current constitution retains articles that enable the president to monitor and head the Cabinet, for instance.

The constitution, nevertheless, defines Turkey as a parliamentary system in which executive power is vested in the prime minister and his Cabinet. This appears set to remain an annoyance for Erdogan, if not a hindrance, unless the constitution can be amended.

As matters stand, the opposition uses every occasion to highlight Erdogan’s authoritarian tendencies and his disdain of the separation of powers principle, and to snipe at Prime Minister Ahmet Davutoglu as a mere instrument of the president’s will.

“At a time when we expect Turkey to become a truly pluralistic democracy where everyone is heard and everyone is allowed to express themselves, we see it slowly turning into a system ruled by one man,” according to Mehmet Bekaroglu, a deputy head of the Republican People's Party (CHP).

Addressing party members in Trabzon over the weekend, Bekaroglu said Turkey was being run under a de facto presidential system in which the president calls the shots, while the prime minister acts merely as a “coordinating minister.”

Bekaroglu recalled that Erdogan’s intentions had been made apparent by his senior adviser, Binali Yildirim, who declared recently that Erdogan would head Cabinet meetings in 2015. If the constitution can not be amended to make him the de jure head of the executive, Erdogan will continue to face such criticism at home and abroad.

He will also find that the Constitutional Court — the only branch of the judiciary he still lacks full control over — will remain a potential source of irritation. Erdogan’s plans, therefore, ultimately require that a new constitution is drafted, or the present one is amended, to turn Turkey into the presidential system that he and his supporters in the ruling Justice and Development Party (AKP) desire.

This in turn requires a two-thirds majority for the AKP in parliament, following the general elections planned for June 2015, which will enable it to draft its own constitution and submit it to a referendum despite objections from the opposition.

The calculation is that a strong turnout for the AKP in the 2015 elections will also translate into strong support for the AKP’s draft constitution. In a speech at a meeting with Anatolian businessmen on Dec. 6, which was also attended by Erdogan, Deputy Prime Minister Numan Kurtulmus spelled out what they were aiming for:

“God willing, democratic steps will be taken after the 2015 elections, starting with a presidential system based on a new constitution, a new law on political parties and a change to parliamentary regulations,” Kurtulmus said.

Numerous questions remain despite such neatly laid out plans for Erdogan’s political future. What happens if the AKP, for instance, when winning the elections, does not muster the majority necessary to achieve the things that Kurtulmus alluded to? How long can Erdogan continue to force the limits of the current constitution in such a case? Will Davutoglu and members of his Cabinet be happy to remain under Erdogan’s shadow and tutelage, having won the elections, even if they do not get the numbers required to change the constitution?

At any rate, Erdogan’s political ambitions appear set to produce confusion if his current de facto status continues. Diplomats in Ankara, for instance, will have to figure out whether their true interlocutor as foreign minister is Erdogan’s “shadow foreign minister” Ibrahim Kalin or Foreign Minister Mevlut Cavusoglu, who already appears insignificant in Erdogan’s scheme of things.

Foreign investors and businessmen, on the other hand, will not know whether they should factor in the levelheaded remarks of Ali Babacan, the deputy prime minister in charge of the economy, or the “harebrained notions” — to cite a Western diplomat who spoke to Al-Monitor on the topic — of Erdogan’s chief economic adviser Yigit Bulut when formulating at strategic decisions.

Bulut avidly supports Erdogan’s belief that an “international interest rate lobby” is out to undermine Turkey, and insists Ankara should sever all ties with the European Union and enter strategic partnerships with Russia and China instead.

There is also the question of the “Gul faction” within the AKP, namely the supporters of former President Abdullah Gul who was sidelined during the process that elevated Erdogan to the presidency. Will the dissatisfaction over Erdogan’s interference in the government and the AKP result in some in the AKP looking for a way out under Gul?

These questions will spring up with increasing frequency in the coming weeks and months as the country prepares for the June elections. Many believe those elections will be a crucial turning point for Turkey’s democracy, which already appears tarnished to the outside world due to Erdogan’s ambitions.

Despite such questions that appear problematic for Erdogan, and the negative image he is projecting for Turkey abroad, the odds remain to Erdogan’s advantage at home according to Dogu Ergil, a prominent political scientist and sociologist.

“What Erdogan is doing as president is of course contrary to the system as we know it, but it is hard to argue that it is totally unconstitutional, even if the constitution says Turkey is a parliamentary system,” Ergil told Al-Monitor.

Ergil pointed out that the constitutional articles Erdogan is relying on give Turkey the appearance of a semi-presidential system. He nevertheless underlined that under the present constitution the president can only provide “guidance,” but cannot interfere in the functions of the elected government.

Ergil believes, however, that there is little to prevent Erdogan from continuing to act as he is doing, even if the AKP comes out of the general elections unable to change the constitution and transform Turkey into a presidential system. He also thinks it unlikely that Davutoglu, or members of his government, will become more assertive against Erdogan in the future.

“Erdogan sees his legitimacy resting in the fact that he is the elected choice of the people. He is also the spiritual leader of the AKP whose members and supporters see him as the leader of a revolution that brought them to prominence from obscurity, and carried them from poverty to relative wealth,” Ergil said.

He added, “He is more to them than just a political figure, and therefore he is unlikely to face meaningful opposition from within the AKP, unless there is a serious change in the overall situation."

Erdogan remains a divisive figure for Turkey whose populist outbursts also land Ankara in difficult international situations, and not to mention the confusion he causes for potential investors with his off-the-cuff economic conspiracy theories. None of this, however, appears to be working against him at home, whatever it may be doing to his international reputation.