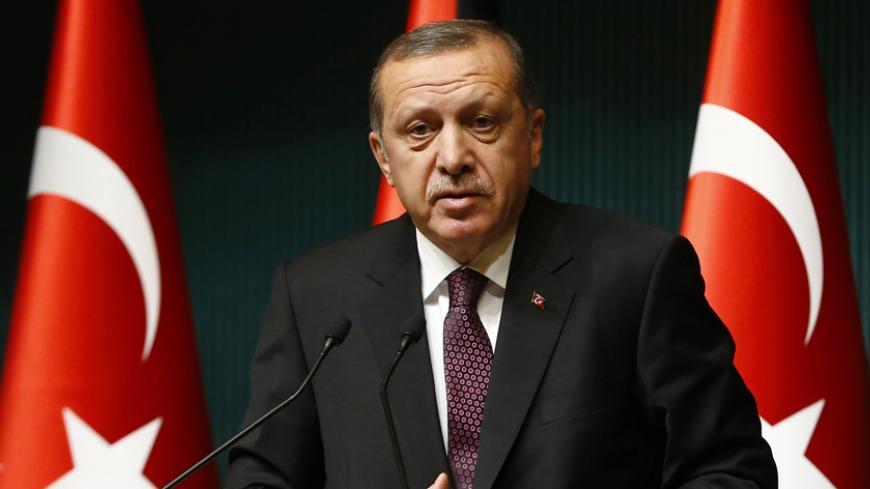 Putting aside all pretenses of the political impartiality required of him under the constitution, Turkish President Recep Tayyip Erdogan has started to campaign on behalf of the ruling Justice and Development Party (AKP), which he wants to see emerge stronger from the general elections on June 7.

Erdogan is not toiling for the future of the AKP, though, but for his own political future as an executive president, which he hopes to bring about by means of a new constitution to be drafted on his behalf by the AKP. Polls already indicate the AKP will win the elections with a comfortable lead, but this is not enough for Erdogan.

He needs the party, which he co-founded and headed until he was elected president in August 2014, to win at least a two-thirds majority in parliament so that it can draft a new constitution and submit it to a referendum without support from other parties.

He made this amply clear in an address to a crowd of supporters in the central Anatolian city of Kirsehir on Jan. 30.

“You will show the necessary attitude on June 7 and display the strength necessary for a new constitution in the same way that the nation displayed its will during the presidential elections. You will lay the foundation of the New Turkey,” Erdogan said.

Erdogan has also made it clear over the past few days that the main aim in drafting a new constitution would be to introduce a presidential system in Turkey that would replace the current parliamentary one.

“We have to move fast without getting bogged down. … A new constitution, a new system of government, will take all the burden off politics and the economy. We must not put this off any longer,” Erdogan told members of the Association of Industrialists and Businessmen (TUMSIAD) on Jan 31. “Does the opposition want a presidential system? It does not. So this means it is the right thing to do. It’s as simple as that,” he said defiantly.

Opposition parties accuse Erdogan of trying to increase his personal powers through a presidential system that they claim will turn Turkey into a totalitarian country. Remarks by Erdogan have fueled speculation in this regard. He argued recently, for example, that it was difficult to govern freely under the present system.

“I should be the one determining who I work with, but can’t do this under the present system because there are those, the judiciary for example, who prevent it,” Erdogan said in an interview with the state-run TRT network Jan 29. “You can’t run a country, or a city in this way. This is the inadequacy of the parliamentary system,” Erdogan said. He went on to give examples from other countries to reinforce his argument.

“For example, the system in England is a semi-presidential one in which the operative factor is the queen. Is there a sultanate in the US? It’s not a sultanate if it is the US, Brazil, South Korea or Mexico. So why does it become a sultanate when the idea is advocated for Turkey?” Erdogan asked.

His critics were quick to point out that Erdogan has a mistaken notion of the British system of government, and conveniently overlooks the checks and balances that exist in the US system restricting the powers of the president.

“The president intends to run the country through presidential decrees. This does not exist in any presidential system. … Erdogan wants a special kind of presidency for himself. This is called a dictatorship,” Akif Hamzacebi, a senior member of the main opposition Republican People's Party (CHP) said in a news conference in Ankara.

Erdogan’s supporters, however, disagree. Resul Tosun, a columnist for the daily Star, wrote Jan. 30 that the system proposed by Erdogan is one where the president is not impeded by such things as “votes of confidence,” “parliamentary questions” or “interference by opposition parties.”

Tosun said this was essential “because Turkey needs work to be carried out without interruption,” and that under a presidential system the president was accountable to the people at election time. He also argued that if Turkey had this system, the achievements of the AKP administration over the past 12 years would have been at least threefold.

Such unquestioning support for a system that is not constrained by any democratic institution does not get across-the-board endorsement within the AKP. Etyen Mahcupyan, a former journalist who is currently an adviser to Prime Minister Ahmet Davutoglu, and who is not averse in principle to a presidential system, believes that Erdogan’s Islamist support base would not want to see a “hegemonic” presidential system in Turkey.

Muharrem Sarikaya, a seasoned political commentator and the Ankara representative of the daily Haberturk, also points out that there are senior names within the AKP who are cool to the idea of a presidential system. President Abdullah Gul, a founding member of the AKP, is among these, according to Sarikaya. Parliamentary Speaker Cemil Cicek, another prominent AKP member, has also expressed doubts in the past about a presidential system for Turkey.

“The system Erdogan is proposing is beyond what one sees in the world and specific to Turkey,” Sarikaya told Al-Monitor, indicating that this system is unicameral, and has nothing to balance the exercise of political power. “It entails the bureaucracy is attached exclusively to the president, whose decrees are also free to a great extent of judicial control,” Sarikaya added.

There is also the question of where this debate leaves Davutoglu, who is already seen by the opposition as an irrelevant political figure given that the reins of power remain firmly in Erdogan’s hands today, although constitutionally the prime minister heads the executive.

There is also the question of whether the AKP will get the votes it needs change the constitution on its own. Erdogan may get his way if the pro-Kurdish People's Democracy Party (HDP) runs on its own in the June elections, even if its chances of overcoming the 10% electoral threshold appear slim.

If it fails to garner enough support, its votes will automatically go to the leading party, which in this case is more than likely to be the AKP. Other conditions for Erdogan’s plans to work require that the AKP’s vote does not fall below 43%. That Erdogan has begun to campaign on behalf of the AKP is taken by some as a sign that he has concerns in this respect.

“Erdogan got nearly 52% of the vote during the presidential elections. This, however, does not necessarily represent the vote the AKP will get. He is therefore trying to convince the electorate that the vote in June will actually be for him,” Sarikaya said.

Erdogan will, of course, continue to hold the reins of power as long as the AKP wins the elections and has a majority in parliament, even if it does not come up with the numbers needed to draft a new constitution. He is aware, however, that his executive decisions as president will remain open to debate in that case.

This is why Erdogan is expected to campaign intensely on behalf of the AKP in the coming weeks and months, even though the present constitution does not allow him to do this legally.