Opposition turns up pressure on Erdogan over defense dealings with Qatar

Turkey’s political opposition has stepped up pressure on the government over its often-opaque dealings with Qatar as the country’s tank production contract, awarded to a Turkish-Qatari joint venture, remains bogged down. 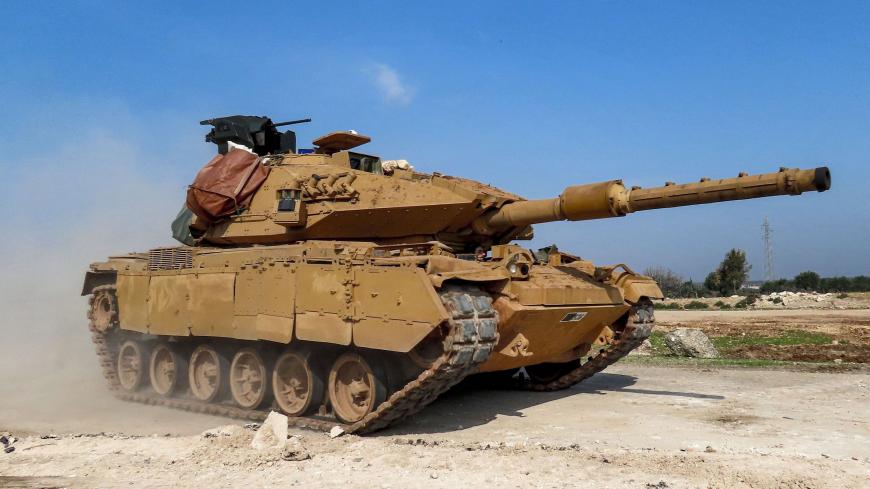 A Turkish military M60T battle tank is seen along the M4 highway, which links the northern Syrian provinces of Aleppo and Latakia, before incoming joint Turkish and Russian military patrols in the village of al-Nayrab, southeast of the city of Idlib and west of Saraqib in northwestern Syria on March 15, 2020 - MUHAMMAD HAJ KADOUR/AFP via Getty Images

The Turkish government’s ties with Qatar have put a spotlight on the growing problem of transparency and accountability in Turkey’s defense industry, with a key tank project awarded to a Turkish-Qatari joint venture appearing to be on the rocks.

A raft of fresh deals with Qatar in late November rekindled opposition criticism that President Recep Tayyip Erdogan’s close bonds with Qatar’s ruler lack transparency and flout Turkey’s national interests. During a live TV debate Nov. 29, opposition lawmaker Ali Mahir Basarir fiercely criticized the government over the privatization of a national tank factory in Arifiye in the northwestern province of Sakarya. The Turkish military has been “sold off to Qatar” for $50 million, he said, adding that the factory was its “most strategic” asset.

Basarir, a member of the main opposition Republican People’s Party (CHP), was referring to the factory’s 25-year lease to BMC, a Turkish-Qatari venture, by a presidential decree last year. Ethem Sancak, a businessman close to Erdogan, holds 25% of BMC shares and chairs the company’s executive board. Talip Ozturk, a distant relative of Erdogan, owns 25.1% of the venture, while the remaining 49.9% stake belongs to Barzan Holdings, which is owned by the Qatar Armed Forces Industry Committee.

The joint venture has pledged to invest $685 million in Turkey’s defense industry, including for the joint production of Turkey’s first indigenous new-generation main battle tank, Altay, a project it won in 2018. The details of the partnership deal between BMC and the Qataris remain unbeknownst to public institutions, including the parliament’s National Defense Commission, which is supposed to oversee the government’s defense and security procurements as well as the defense industry but has become fully dysfunctional since Erdogan assumed sweeping executive powers in 2018.

Controversy over the transfer of the factory, which sprawls over three hectares and has an employment capacity of 2,000 people, has simmered in Turkey ever since the decision was announced. Factory workers have demonstrated against the move while opposition parties have pointed to the issue as an example of the government flouting transparency and accountability even on matters of vital national interest.

The Turkish military is expected to need 1,000 Altay tanks over 20 years. It would be Turkey's first exportation of a domestically produced tank and while Qatar plans to purchase 100, it hardly needs that many, given its land border of only 60 kilometers (40 miles). Nonetheless, the major defense partnership serves to strengthen Qatar’s ties with Turkey, guarantees a continued Turkish military-political shield for the tiny emirate against the Saudi-led bloc and helps Qatar diversify its defense sources.

Basarir’s remarks rekindled a vitriolic war of words between Erdogan’s government and the opposition. Government officials cast Basarir as insulting the armed forces, with the Defense Ministry pledging to pursue legal action against the lawmaker. Turkey’s media watchdog, meanwhile, slapped a temporary ban on the program that hosted Basarir and a hefty fine on the TV station, Haberturk.

The opposition, however, has refused to back down. In a hard-hitting speech in parliament Dec. 7, CHP leader Kemal Kilicdaroglu called the factory “the country’s honor” and asked, “Is there any other country in the world that has ceded its tank factory to [another country’s] army?” He accused the government of nepotism, charging that neither Sancak nor the Qataris have any experience in tank production.

No matter how hard Ankara tries to suppress the criticism, the debate underscores the growing problem of transparency and accountability in the Turkish defense industry that has accompanied the rise of companies close to Erdogan in recent years.

The BMC’s advance in the sector provides an ample illustration of the rise of the president’s men. The company is now a leading producer of buses, trucks and rail systems as well as the Kirpi armored vehicles and mine-resistant ambush protected vehicles. It aspires to become Turkey’s sole producer of diesel engines for land vehicles and jet engines. BMC became the first Turkish private company to reach the Defense News’ global Top 100 list of manufacturers by defense revenue, ranking 85th with more than $554 million in defense revenues in 2018, an 86% increase from the previous year, and 89th with $530 million in 2019.

There are two other important unanswered questions about the tank project. For one, has BMC completed the promised investments and modernized the factory? A press tour of the facility could easily provide the public with answers, but the company has so far not offered one.

The second issue pertains to the delay in the production of the Altay tank due to the company’s failure to find foreign suppliers for some key parts, including the tank’s engine. Back in November 2018, when BMC signed the contract for the Altay’s production, officials said the Turkish army would receive the first tank in 18 months.

In January, however, Ismail Demir, the head of the government’s defense industry agency, acknowledged that BMC had yet to begin production because it was still working to source its power pack. The 18-month turnaround time will begin once production starts, he said. Almost a year on, the project is still snagged on the problem.

Vice President Fuat Oktay told a parliamentary commission last month that BMC had signed subcontracts with German manufacturers for the power pack, but the German authorities had yet to greenlight the deals. Meanwhile, BMC has reportedly started talks with South Korea’s Hyundai Rotem to acquire the foreign technology.

The issues that have brought the tank project to the brink of collapse are directly connected to Turkey’s transition to an executive presidential system in the summer of 2018 that concentrated power in Erdogan’s hands. The consequences of the shift have included the erosion of parliamentary, executive and judiciary oversight as well as the civil society’s inability to monitor public projects, the main reasons bogging down the Altay program.