Coverage of the recent anti-government street protests in Egypt suggest little has changed on the media scene since the January 25, 2011 Revolution. 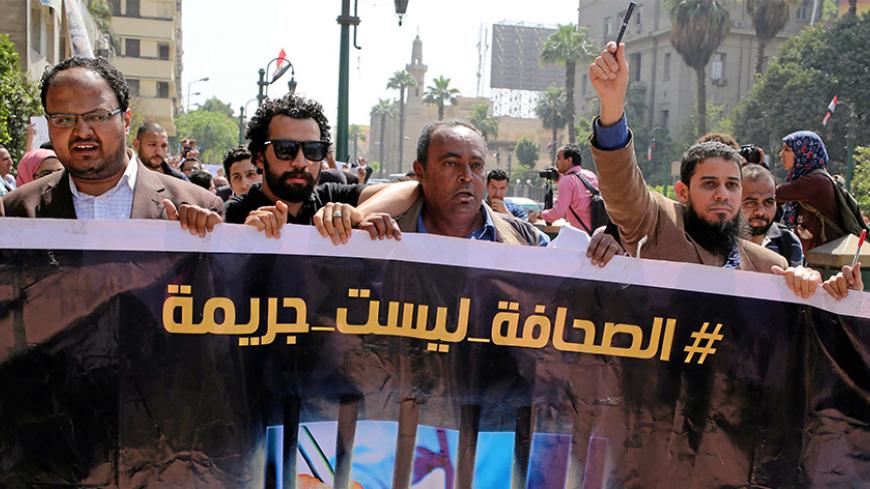 Egyptian journalists hold a banner during a protest against the interior minister following the arrest of colleagues for covering anti-government demonstrations, outside the Egyptian Press Syndicate in downtown Cairo, April 28, 2016. - REUTERS/Mohamed Abd El Ghany

Egypt is deeply polarized, and nowhere are the divisions more evident than they are in the country's politicized and biased media.

Rather than accurately reporting on the country's issues to help the public better understand the complexities of the current political situation, Egypt's media itself reflects the ongoing political and ideological conflict, and has at times fueled the conflict, fanning the flames of intolerance and inciting violence against "the other" — those opposing President Abdel Fattah al-Sisi, or who are even remotely critical of the regime.

On April 26, the day after protests were held to denounce the handing of two Red Sea islands to Saudi Arabia, the headlines of the main state-sponsored and pro-government, privately owned newspapers on the one hand, and those of independent papers on the other, vastly contradicted each other, offering opposing narratives. It was as if the journalists and editors from the two camps were reporting from entirely different realities.

While a few newspapers, such as the privately owned Al-Masry Al-Youm and El-Shorouk, did try to maintain balance and a degree of professionalism and objectivity in their reporting, highlighting the grim reality of the heavy-handed crackdown on opposition activists by security forces, most media outlets were in lockstep with the authorities and chose to downplay the anti-government protests, describing them as "small" and "insignificant."

"The Squares Are For Loyalists and Security Forces Await the Opposition Activists," was the almost identical headline in the independent Al-Masry Al-Youm and El-Shorouq. In stark contrast, Al-Akhbar and Al-Gomhouria (both of which are state-sponsored), the semi-official Al-Ahram and some pro-government newspapers such as Al-Youm7 and Al-Watan painted a bright picture of revelers joyfully celebrating: "Sinai Liberation Day." They cheered the "patriotic" regime supporters who had danced and raised the national flag at pro-government rallies staged in various parts of Cairo the day before. Meanwhile, they demonized the angry activists denouncing the surrender of the islands, branding them "instigators of chaos" and "traitors."

"The people have defeated the evil forces!" read the front page banner in Al-Gomhouria. The latter term was in reference to the opposition activists demanding that the land deal be scrapped. Meanwhile, the headline in Al-Akhbar dismissed the anti-government protests as "insignificant," stating, "The people are building as the army defends them … lavish celebrations and low-key protests."

The pro-government Al-Youm7 and Al-Watan went further, carrying these headlines respectively: "the Muslim Brotherhood has failed to incite protests," and "April 25: The People Celebrate As The Army Confronts Terrorism."

Pro-government talk show host Ahmed Moussa, appearing on the privately owned satellite channel Sadda El Balad on the evening of April 25, was in a festive mood, cheering the "people's victory" over the "traitors," "foreign agents" and "criminals." Heaping praise on the "patriots" and "heroes" supporting the army and the police, he said the patriotic citizens who celebrated on the streets, had taught the "enemies of the state," — who tried to "spoil the celebrations by spreading chaos and protesting" — a lesson in citizenship and dignity. He launched an Arabic hashtag that translates into "Kudos to the Egyptian People," which according to him were "those exposing and confronting the traitors," urging viewers to use it to tweet "patriotic slogans."

"Hail to those celebrating! Long live Egypt," he cried.

The media's binary narrative is not new; it has been the norm in Egypt since the 2011 mass uprisings that forced the authoritarian President Hosni Mubarak to step down. In the early days of the uprisings, state media and then-majority pro-government, privately owned channels and publications had turned a blind eye to the street protests. Halfway through the 18-day uprisings, the media changed its discourse, vilifying the opposition activists and branding them "thugs" and "foreign agents." Toward the end, when it became clear that the demonstrators would not let up until the regime fell, the media made an abrupt turnabout, this time siding with the protesters. The headline in the semi-official Al-Ahram, on Feb. 12, 2011, declaring victoriously that "The People Have Toppled the Regime!" remains imprinted in the minds of the youth revolutionaries who had aspired for media reform.

More than five years on, there has been little change; the media today is in a state of anarchy. Despite articles in the new constitution guaranteeing freedom of expression, and claims by Sisi that "Egypt enjoys unprecedented freedom of speech," the stifling of the press continues through restrictive legislation and a host of intimidation tactics practiced by the regime and its security arms. A controversial anti-terrorism law decreed by Sisi in August 2015 imposes a hefty fine of up to 500,000 Egyptian pounds (the equivalent of $50,000) on journalists for reporting news that contradicts or strays from the official narrative on security operations in Sinai Peninsula and other terrorist attacks. Arrests and detentions of journalists and assaults on those trying to cover protests by security officers, "thugs" and "patriotic citizens" have become all too common in today's Egypt and are being used to silence critics.

43 journalists were reportedly among the dozens arrested from protest sites on April 25, with seven of them still in custody, according to the English-language Ahram Online news website. Meanwhile, the Committee for the Protection of Journalists has stated that 33 journalists were arrested, with two remaining in custody. There have also been reports of attacks on journalists, including a member of the BBC's TV camera crew who were assaulted by a pro-Sisi crowd under the watch of uniformed police who did not intervene, according to the BBC's Orla Guerin. In a message posted on her Twitter account April 25, Guerin decried the fact that "supporters of President Sisi were free to gather in downtown Cairo unlike critics who faced a huge crackdown." Danish journalist Stefan Sigaard Weichert was also molested by a mob before being handed to police in the impoverished Cairo district of Nahya, the privately-owned Sadda El Balad reported on the night of April 25.

The assaults and detentions of journalists prompted a small but angry protest rally outside the Press Syndicate on April 26. The nearly 100 journalists participating in the protest denounced the latest wave of "police intimidation and harassment of journalists" which some of them described as "politically motivated."

Moreover, the Press Syndicate has declared its intent to file lawsuits against both Interior Minister Magdy Abdel Ghaffar and the Head of Cairo's Security Directorate in the wake of the recent "police violations."

If indeed this happens, it would be the first such move of its kind, pitting the media against an institution it has traditionally aligned with and respected. Some of the journalists protesting outside the Syndicate told Al-Monitor, "Enough is enough!"

It appears that a small number of members of Egypt's long repressed media are finally waking up to the realization that the return of Mubarak's security state — and the authoritarian legacy of three former military presidents — are standing in the way of any real media reforms. With many other journalists and editors still closely aligned to the various security agencies that make up the "deep state," it may be a while yet before there are any tangible reforms in the country's media. I choose to believe, however, that it is this small group of thoughtful, committed journalists who will bring about the badly needed changes. As Margaret Mead once said, such a group is the only thing that can change the world.