Cairo is investigating the writer of an pseudonymous editorial that earned his Al-Masry Al-Youm newspaper a hefty fine for suggesting autonomy for the Sinai Peninsula. 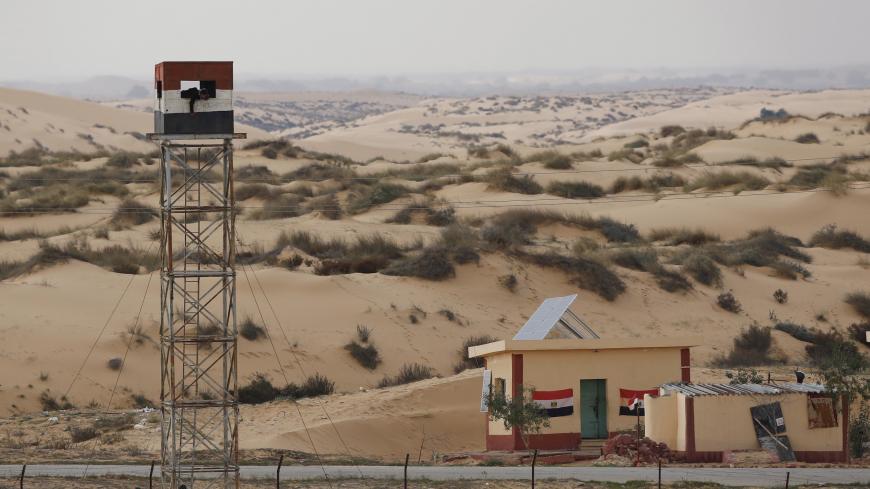 An Egyptian policeman gestures from an observation tower is seen from the Israeli side of the border with Egypt's Sinai peninsula, in Israel's Negev Desert Feb. 10, 2016. - REUTERS/Amir Cohen

CAIRO — In what free expression advocates described as another blow to press freedom in Egypt, the Supreme Council for Media Regulation imposed harsh penalties April 22 on the local Al-Masry Al-Youm newspaper over op-eds calling for the independence of the Sinai Peninsula.

In addition to ordering the paper’s owners to pay 250,000 Egyptian pounds (about $16,000) as a fine, the council referred the issue to the prosecutor general to investigate the intent behind the articles.

The Supreme Council for Media Regulation, an independent authority, said in a statement that Al-Masry Al-Youm's editor-in-chief, Abdel-Latif el-Menawy, was ordered to delete the articles in question from the newspaper’s portal.

The newspaper was ordered to publish a “clear, explicit apology” addressed to the public over its alleged “violations.” The controversial column written by a pseudonymous “Newton” will be halted for three months. The column usually discusses a variety of topics related to politics, society and economy.

Menawy was referred to a disciplinary committee at the press syndicate and ordered not to give any statements to any local or foreign media outlets for a month.

In the statement released after almost four hours of interrogation with the newspaper’s founder and co-owner, Salah Diab and Menawy, the media regulator said the freedom of press in Egypt was “not ultimate.”

“Newton” had recently written several articles in the daily newspaper that called for transforming the Sinai Peninsula into an autonomous region. He said that an independent ruler should be assigned to run the region, which would operate as an international free zone after successful models in Singapore, Malaysia and Hong Kong.

Newton’s first controversial article was published on April 12 under the headline, “The introduction of a job,” in which he suggested that a new position of Sinai ruler be introduced. The ruler, according to Newton, would be required to be “entirely independent of the prevailing laws … the state’s budget and bureaucratic regulations pertaining to investment.”

“The region … will only be affiliated with the state with regard to foreign policy and … border security,” Newton wrote.

The Sinai Peninsula, the sole part of Egypt located in Asia, borders with Israel and the Palestinian territories. It is divided into two provinces, North Sinai and South Sinai.

Newton’s suggestion was met by uproar among social media users and journalists who referred to Sinai as “a red line” for Egypt’s national security.

One Twitter user, Ahmed Elhoseny, called for boycotting Al-Masry Al-Youm. “Salah Diab is [the one who writes] Newton’s column. … He himself brings such sick minds to disseminate their ideas and poison among people,” he tweeted.

Another, Reda Salah el-Khyat, tweeted, “Sinai, the land of turquoise, is part and parcel of our beloved Egypt, and whoever says otherwise should be tried for high treason. … Why did he name himself after a scientist who created a scientific revolution and [would have been] the last to cause an ideological mess that affects national security.”

Writer Khaled Miri wrote in his column for state-owned Al-Akhbar newspaper April 14, “We have the right to question this Newton about suspicious deals taking place over the land of Sinai.”

“My question is to the Supreme Council for Media Regulation. … Isn’t it our right to know who this Newton is … who is behind what was written and why?” Miri wondered in his article, headlined “Suspicious deals.”

It has long been known within Egypt’s press community that Newton is indeed Diab, who confirmed it a few hours before being interrogated by the media council when he signed a "Newton" op-ed for the first time with his real name.

The op-eds may have reminded Egyptians of earlier conspiracy theories raised by local and international journalists during the reign of Islamist President Mohammed Morsi.

Many believed that the Muslim Brotherhood, now deemed a terrorist group in Egypt and several other countries, would hand over North Sinai to the Palestinians living in the Gaza Strip to resettle and build their own state during the reign of the ousted president.

Nevertheless, Newton defended his proposal in the first article, writing, “Anybody who thinks of this as a conspiracy to divide the state has bad intent.” He went on, “There is no room for giving up any part of this region [where] Egyptian blood was shed,” in reference to the wars between Egypt and Israel back in 1967 and in 1973 over Sinai.

Menawy attempted to defend the newspaper. A few days before being interrogated by the media council, the editor said in a telephone interview with talk show host Amr Adeeb, “I run this institution … and the operations there. … I know very well who writes what.” He went on, “Following this fuss, I reviewed every single article written within the past two years that involved Sinai, especially those by Newton. I only found a few mentions of Sinai about the war on terror … development and anniversaries of the restoration of Sinai.”

In a report titled “Sinai in the heart and conscience,” Diab attempted to make amends by implicitly apologizing for his earlier views, just a few hours before he was interrogated by the Supreme Council for Media Regulation on April 22.

“I have been following with great interest the stirred controversy about what I wrote on the development of the Sinai Peninsula, this precious spot of Egypt’s soil [for which] Egyptians paid … their souls and money throughout history,” he wrote. “The reactions read like a survey that confirmed the attachment of each and every Egyptian heart to Sinai, even though some of those reactions [were extreme] one a way or another or involved accusations only God knows I am innocent of.”

Diab retracted his earlier thoughts as well, writing, “I could say that despite aiming for new ideas by what I wrote that have to do with an intellectual contribution, I have come to realize that the words ‘ruler’ and ‘region’ were not the right ones reflecting what I meant.”

Egyptian President Abdel Fattah al-Sisi’s reaction to the controversy was unexpected. During the inauguration of national projects east of the Suez Canal on April 23, Sisi said the ideas mentioned in recent articles on Sinai were appreciated. His statement came one day after the media council had imposed the sanctions against Al-Masry Al-Youm.

“I wish the one who wrote these articles were aware of what we did for Sinai over the past six years,” Sisi said, adding that up to 600 billion Egyptian pounds (around $38 billion) were spent on the peninsula’s development.

According to Sisi, those who responded to the articles should not accuse those whose views are different from their own of having personal agendas.

The Newton debate raised concerns over a lack of freedom of press and expression in a country where 20 journalists are currently behind bars. The World Press Freedom Index of 2019, released by Reporters Without Borders, ranked Egypt No. 163 out of 180 countries in press freedom, down two spots from 2018.

Fahd el-Banna, an Egyptian lawyer who volunteers to defend journalists, believes the measures taken against Al-Masry Al-Youm were unusually severe.

“Newton wrote about a specific case, adopting an investment-wise point of view. If they were just [verbal] reactions to what he wrote, it would be normal. But the disciplinary measures taken against the newspaper were extreme,” Banna told Al-Monitor. “An opinion should be responded to with another opinion, not with legal action or penalties … as long as the newspaper did not incite violence or strife,” he said, adding that Diab “did not call people to violate the public order or morals.”

Khalid el-Balshy, former head of the freedoms committee at the press syndicate, agrees with Banna.

“Though I’m against Newton’s ideas about Sinai from a political viewpoint, I believe that anyone has the right to present [his or her] thoughts, and at the same time, any person can refute them. … A word for a word and an idea for an idea. … Ideas should be discussed, not punished,” the outspoken journalist told Al-Monitor, adding, “The columnist is not a policy-maker. He presented a suggestion that could only be carried out by the state itself.”

“The council that regulates media and press in Egypt, which is not an executive authority, decided to investigate the intentions of the newspaper … [even though] the head of the state did not reject Newton’s ideas,” Balshy concluded.