Egyptian President Abdel Fattah al-Sisi has inaugurated a series of major development projects in the Sinai Peninsula, long a hotbed for terrorism. 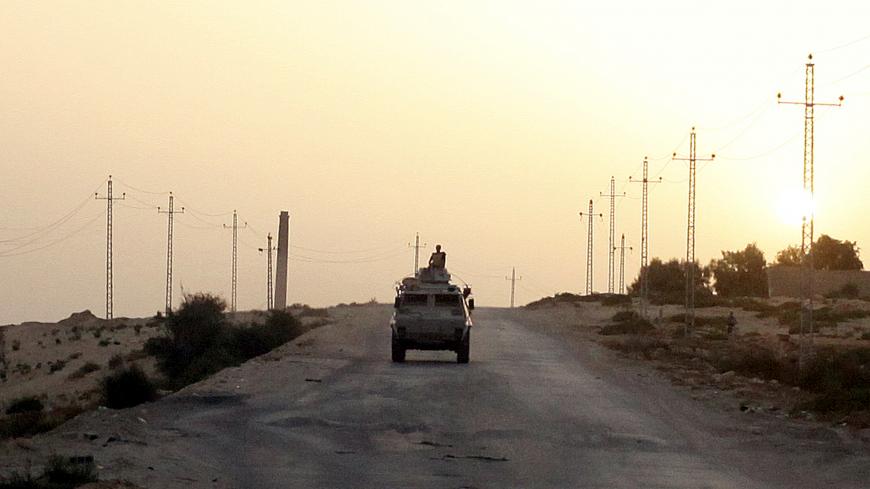 An Egyptian military vehicle is seen on the highway in northern Sinai, Egypt, May 25, 2015. - REUTERS/Asmaa Waguih/File Photo

President Abdel Fattah al-Sisi attended the April 22 inauguration of a number of national projects in Sinai designed to boost the country’s economy amid the novel coronavirus pandemic.

The projects include the last phase of drilling for the strategic Ahmed Hamdy Tunnel 2 in the Suez Canal. It is the fifth tunnel to be constructed beneath the canal, to link Sinai, an area of 60,000 square kilometers or about 6% of Egypt’s territory, with the rest of the country.

The tunnel was named after an Egyptian general who was killed while crossing the Suez Canal with his soldiers during the October War against Israel in 1973. The other four tunnels are located in the Ismailia and Port Said coastal governorates.

Sisi also attended the opening of the Mahsama water treatment plant in the northeastern city of Ismailia, east of the canal.

The inauguration of these national projects coincides with the 38th anniversary of Sinai Liberation Day, April 25. Israel occupied Sinai during the Six-Day War in 1967. When Egypt defeated Israel in 1973 six years later, President Anwar al-Sadat and Israeli Prime Minister Menachem Begin signed a peace treaty in which Israel agreed to withdraw from the Sinai Peninsula in stages. April 25, 1982, marked the departure of the last Israeli forces from the peninsula.

Days before the projects opened, local media outlets were busy talking about the controversial articles published in Al-Masry Al-Youm, written by founder Salah Diab under the pseudonym “Newton.” Diab had proposed the isolation of Sinai from Egypt and allowing it to select its own ruler as a free industrial zone not subject to Egyptian laws.

Egypt's Supreme Council for Media Regulation stated that the paper had violated the Egyptian Constitution, Egypt's laws and codes of ethics, as well as negatively impacted the country’s cohesion. The council fined the newspaper 250,000 Egyptian pounds ($15,835) and referred the case to the public prosecutor.

Sisi said during the April 22 inauguration ceremony that those who are talking about Sinai should be aware about what the state has achieved there in the past six years. He said that the state has spent 600 billion Egyptian pounds ($38 billion) on Sinai infrastructure projects, highlighting the state’s commitment to reconstructing Sinai.

“Our national security is not valued in money,” he said. Sisi also encouraged investors and businesses to invest in Sinai.

Businessman Mohamed Farag Amer told Al-Masry Al-Youm April 23 that he is very pleased with what the president said about the achievements and plans that have been implemented in Sinai.

“The Egyptian state did the impossible in Sinai, especially in the agriculture and investment sectors,” Amer said.

Mutasim Rashed, an economic adviser at the Egyptian Federation of Investors Associations‎, told the newspaper there are many fields ripe for investment in Sinai, especially agriculture such as fish farming and the production of olives and medicinal herbs.

Economists hailed the national projects in Sinai, saying they will have a positive impact on the Egyptian economy.

“The development of Sinai is a major focus within the framework of the state’s general strategy to improve its infrastructure, provide new job opportunities for the youth and attract investors,” economist Rashad Abdo, head of the Egyptian Forum for Economic and Strategic Studies, told Al-Monitor.

“The development of Sinai is an important means to fight terrorism,” Abdo added.

North Sinai has witnessed a number of terror attacks since 2012, when late President Mohammed Morsi took over. After he was ousted in 2013, the attacks gradually decreased.

“Sisi has made an infrastructure revolution in Sinai to link it to the rest of the country after it was a hub for terrorists,” Abdou said, adding that Sinai will soon be inhabited by millions of Egyptians in search of a better future.

Among the projects implemented in North Sinai in the last two years are the construction of 11 integrated residential agricultural development clusters, the new city of Rafah, the construction of a desalination plant in el-Arish city and the an industrial complex in the Jafafa area.

Passant Fahmy, an economist and member of parliament's economic affairs committee, told Al-Monitor that such megaprojects send an important message both inside and outside Egypt.

“For the Egyptians, it gives them hope that life goes on and reassures them about their future after the coronavirus [crisis]. For the world, it shows the country can face and manage crises,” Fahmy said. She went on, “The necessary protection measures needed to combat the coronavirus pandemic are severely impacting economies worldwide. But I am in totally agreement with the state’s plan of continuing working in parallel with taking precautionary measures to save people’s lives.”

Fahmy explained, “Life must go on. I believe that continuing the work, despite the risk, is better for people than locking the country and facing death due to lack of food.”

On April 1, the United Nations Food and Agriculture Organization, the World Health Organization and the World Trade Organization warned in a joint statement of potential global food shortages if governments fail to manage the crisis appropriately. Many countries have imposed lockdowns on their populations to limit infections, but the measures have also decreased international trade and affected food supply chains.

“Sinai is rich in tourism, agriculture, industry, mining, pastures and sheep. Inaugurating such important projects means that the state is aware of the importance of that area for its economy and for the future generations. I expect that the future will be great,” Fahmy added.