Egypt is seeking to attract residents to move to the Sinai Peninsula, by carrying out development projects and providing job opportunities, to boost the national economy and maintain national security. 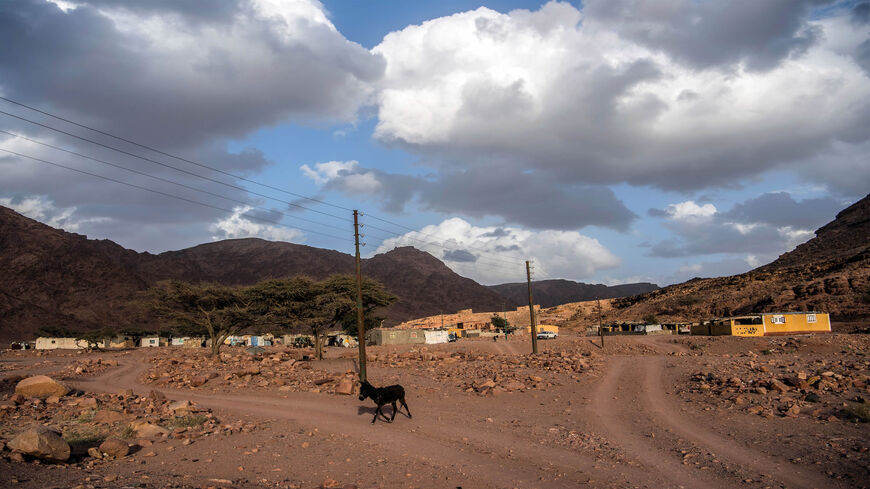 Egypt is working on a plan to attract Egyptians to settle in the Sinai Peninsula, by implementing development projects and providing job opportunities.

The Egyptian government is hoping this plan will also boost the national economy and preserve national security.

Since 2014, the Engineering Authority affiliated with the Egyptian army has spent billions of Egyptian pounds on development and construction projects in Sinai, according to the head of the authority, Ihab al-Far.

Speaking at a Sept. 21 ceremony to inaugurate tunnel projects for the Suez Canal and development and health-care projects in Suez governorate, which was attended by President Abdel Fatah al-Sisi, Far said the Engineering Authority was assigned, on June 30, 2014, to implement 418 projects at a total cost of 486 billion Egyptian pounds (around $31 billion).

“The development of Sinai tops the priority list of the political leadership,” he noted.

He also mentioned a plan to establish a new road network that would serve as a basis for further development.

Far went on to say that the state is in a race against time to implement several mega development projects in Sinai in record time. These include road, bridge and tunnel projects that will contribute to the development plan of the Suez Canal axis.

In May, the Egyptian State Information Service, which is affiliated with the Egyptian presidency, revealed government plans to settle millions of Egyptians in Sinai. According to the plan, the new residents will be provided with integrated services and offered all means for a comfortable life.

Also, urban communities will be established based on economic axes, such as agricultural, touristic or industrial, as well schools, universities, research centers, hospitals and infrastructure projects. The local community will have access to rehabilitation and training programs. Networks of facilities, roads and transportation projects at international standards will be also implemented, in addition to the establishment of 17 Bedouin conglomerates in north and south Sinai, according to the plan.

According to the Central Agency for Public Mobilization and Statistics, 450,528 people live in north Sinai and 111,108 people in south Sinai. The peninsula also has extensions into the Canal zone governorates, at a depth of 5 square kilometers (2 miles) inside each of the governorates of Port Said, Ismailia and Suez. Sinai stretches over an area of 61,000 square kilometers (23,550 square miles), representing 6% of Egypt’s total area.

Observers and experts who spoke to Al-Monitor agreed that development projects and the reconstruction of Sinai is important to address its population shortage. They see this as the best way to attract residents to live there, which will have a positive impact on the political, economic and security levels.

Rashad Abdo, director of the Egyptian Forum for Economic and Strategic Studies, believes it is crucial to focus on the development and reconstruction of Sinai, whether at the political, security or economic levels.

“The spending allocated for this purpose is a step on the right track to turn the Sinai Peninsula from a hazardous breeding ground of problems and crises to a zone of welfare, growth, prosperity and popularity,” he told Al-Monitor.

Abdo praised the development projects and plan to settle Egyptians in Sinai as good, positive and promising. “But we are still at the beginning of the journey and the road ahead is full of challenges and difficulties,” he said. “The allocated spending amount — as a start — is a good thing, but in the future it must be doubled.”

He further stressed the need for the private sector to cooperate with the state to establish more development projects in a faster time.

“It is also necessary to tap on the enormous human capacities in the area. The tunnels under the Suez Canal that have been opened will have a major role in linking Sinai to the motherland and facilitating investments and trade in it. This will lure in businessmen to invest and trade and consequently generate job opportunities, and turn Sinai into an attractive housing and living area,” Abdo added.

Abdel Moneim Saeid, member of the Egyptian Senate and former director of Al-Ahram Center for Political and Strategic Studies, praised the implementation of what he described as “unprecedented, giant national and development projects to support the national economy and provide a decent life for citizens across Egypt, such as Upper Egypt in the south, the Western Desert, the Delta and the Sinai Peninsula.”

He told Al-Monitor, “The huge spending volume in the Sinai Peninsula reflects the political will to expedite the establishment of developed communities that attract more residents to benefit from the huge job and investment opportunities. The area is likely to lure in more residents following the armed forces’ success in ending terrorism and imposing full control in cooperation with the tribes in Sinai.”

Saeid noted that there is a change in the geographical nature of Egypt, especially in Sinai, which requires a proportionate demographic change. “The population shortage in Sinai is dangerous. Research centers, universities and the media sector — with the state’s support — ought to raise awareness among the masses about the importance of moving to new cities, to benefit from better job and investment opportunities generated by giant national projects, especially in Sinai. This will provide them with better living conditions at all levels, away from overcrowded areas in Cairo and the Delta.”

Maj. Gen. Yahya al-Kadwani, member of the parliamentary Defense and National Security Committee, warned that the population shortage in Sinai threatens the national security of Egypt, which would allow the spread of radical groups.

“There is a clear political will to develop the Sinai Peninsula through the giant projects that have been inaugurated. This will encourage citizens to move to the peninsula to benefit from development and improve their standard of living,” he told Al-Monitor.

Kadwani said, “Sinai is an attractive area for investments. It links the three continents of Africa, Asia and Europe. It has promising opportunities, whether in industry, mining, tourism, agriculture and other fields that support the Egyptian economy. The area has become ready to attract foreign investments after the success of the armed forces to impose security in it and rid it of extremist organizations that sought to spread chaos and instability in Egypt.”

He believes that the volume of spending in Sinai is unprecedented in the history of Egypt. “This spending will not stop in the future, which heralds a development renaissance in Sinai. This will have a positive impact on the national economy,” he concluded.