Nine years after a revolution that had "freedom" as a primary demand, censorship of the arts and music is back in full force with added restrictions on organizing cultural events in Egypt. 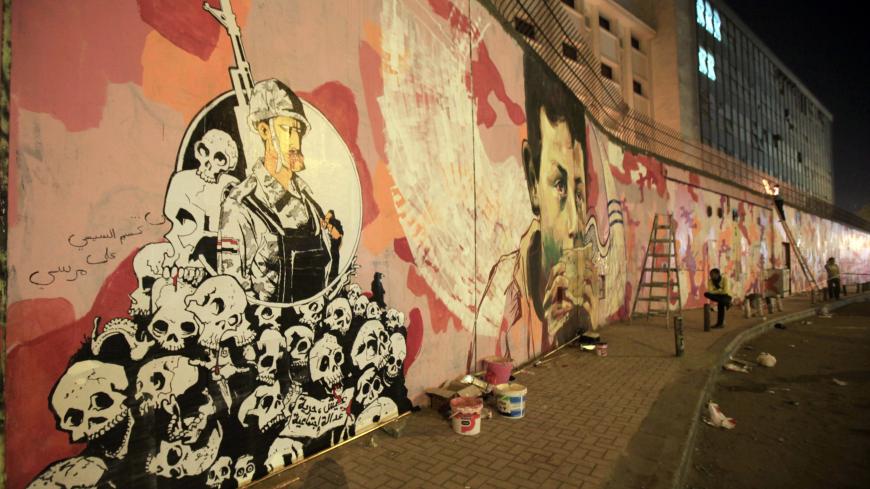 The Jan. 25, 2011 uprising that toppled President Hosni Mubarak unleashed a creative revolution with the spontaneous emergence of a variety of art forms: graffiti, street performances, underground music and satirical online videos. Much of the revolutionary art was a form of protest against social injustice and repression, but it also acted as a visual commentary on the dramatic developments that were unfolding during that time of political turmoil. Relishing their newfound freedom, artists and musicians used their art to express grievances about "social wrongs" and urge action to redress them.

Nine years on, as the anniversary of the revolution approaches, there is hardly a trace of the cultural awakening that symbolized the freedom of expression in the "new" Egypt. An ongoing security crackdown on dissent, in place since 2013, has targeted artists and musicians along with opposition and political figures, journalists and members of the LGBT community, stifling freedom of expression and putting a lid on provocative art and creativity.

Nearly all of the graffiti art that mushroomed on the walls in and around Mohamed Mahmoud Street in the wake of the revolution has been whitewashed and a large part of an iconic graffiti wall on the same street has been torn down. As the authorities carry out extensive renovation works in downtown Cairo, they appear adamant to wipe out any remnants of the revolution. Tahrir Square where the protesters had gathered is undergoing an overhaul — its second since 2011.

Meanwhile, a number of artists who rose to prominence during the revolution, have paid a high price for expressing nonconformist ideas. Ganzeer, notorious for his street art lampooning the military, was forced to flee Egypt for the United States after he was branded "a terrorist" by the country's pro-government media in early 2014. His disputed poster on the Mohamed Mahmoud wall depicting a soldier standing amid a pile of skulls likely provoked the allegation, putting him at risk of arrest.

"In today's restrictive environment, artists are no longer able to express their ideas freely; if they do, no gallery or art fair will agree to show their work," said Mohamed Abla, a painter and sculptor whose works touch upon political and social issues. "Artists are increasingly resorting to symbolism in their work; they are also having to self-censor for fear of arrest," he told Al-Monitor. "This situation is unsustainable as Egyptian artists are not accustomed to being silenced — things will have to change."

Abla reminisced about the days when he and fellow artists could showcase their work at the volunteer-run Al-Fan Midan Festival (Art is a Public Square Festival), launched in the spring of 2011. The festival was initially funded by the Ministry of Culture but the funds quickly dried up, prompting organizers to gather donations instead. For three consecutive years, a host of cultural events were staged in public squares across the country under the Al-Fan Midan banner.

"The aim of the festival was to bring culture to the masses and educate the public about art. Organizers sought to attract the layman rather than art connoisseurs so as to spark interest in art," Abla said. "It was also meant to promote freedom of expression and protest all forms of censorship."

The public response was overwhelming with large crowds flocking to the squares to attend the performances or tour the art exhibits. But all that came to a shuddering halt in the summer of 2014, when the festival was canceled twice by the Egyptian authorities on the grounds that "the organizers did not have the right permits." An anti-protest law, passed in November 2013, criminalized such gatherings without a prior permit from the Interior Ministry, spelling the festival's end.

Abla now spends his time shuttling between his art studio in downtown Cairo and Fayoum, a city located southwest of Cairo, where he continues to organize art workshops at the Fayoum Arts Center, which he founded in 2006. He also oversees the running of the Caricature Museum there, which he established in response to the 2005 Prophet Muhammad cartoons controversy "to show that there are also caricatures in Egypt and they are political as well as socially critical," according to a March 2010 interview with the artist published in Qantara.de.

The museum, the first of its kind in the Middle East, showcases an impressive collection of Egyptian cartoons, some dating back to the early 1920s — "a treasure" that Abla has sought to preserve for future generations. While many of the cartoons poke fun at the woes of the society, there are none lampooning President Abdel Fattah al-Sisi. It appears that Abla has to tread cautiously so as not to ruffle the feathers of the authorities. The arrests and detention of a number of satirists in recent years have sent a chilling message of zero tolerance for humor when the military, police or the president are the targets.

This was made clear right from the start of Sisi's rule when "Al-Bernameg," a satirical TV show, was suspended after an episode in which the host, Bassem Youssef, had joked about the "Sisi-mania" sweeping the country at the time. Bassem was accused of disturbing the peace and security of the country in no less than 12 legal complaints filed against him, by pro-government citizens. He has since relocated to the United States and has been unable to return.

In December 2015, Amr Nohan, a law student, was handed a three-year prison sentence for posting on Facebook a doctored image of Sisi wearing Mickey Mouse ears.

It has not been smooth-sailing either for the underground music bands that shot to fame with their politically charged songs in the wake of the revolution. Rock band Cairokee whose song "Sot el Horreya" ("Sound of Freedom") became the anthem of the revolution had several concerts called off in 2018 after tickets had sold out. The repeated cancellations prompted the group to shift its attention to international concerts abroad instead of staging local performances.

A committee formed in July 2018 to regulate festivals and issue permits for cultural events including music concerts. The new regulations also made it mandatory for event organizers to have a capital of no less than 500,000 Egyptian pounds ($31,700) and to provide all details about their event. Moreover, applications for permits can only be submitted in June each year.

"The new restrictions have made it exceedingly difficult to organize a concert as it takes a very long time for the committee to issue the permits, and sometimes, those are never granted," Sherif Hawary, lead guitarist of Cairokee, told Al-Monitor. He believes the restrictions were placed in reaction to the Mashrou' Leila concert controversy when at least seven concertgoers were arrested and detained for raising the rainbow flag at the concert. The government accused them of "inciting debauchery." The Lebanese alternative rock band Mashou' Leila, whose lead singer is gay, has since been banned from performing in Egypt.

The space for freedom of artistic expression has been shrinking under Sisi's rule. In 2017-18, two female singers were detained over their "racy" music videos; they were accused of inciting debauchery. Singer Sherine Abdel Wahab has twice faced prosecution, once in November 2017 over a joke she made at a concert about the River Nile being polluted, and a second time earlier this month when she had said on stage, "Egypt doesn’t deserve me." The legal complaints against her were filed by Samir Sabry, a pro-government lawyer notorious for filing lawsuits against celebrities.

Egyptian-American musician Nader Sadek was detained for four days in 2016 for his part in organizing a concert in which Brazilian heavy metal band Sepultura would have played. In this case, the lawsuit was filed by Hani Shaker, head of the Musicians Syndicate, who claimed in a TV interview on Egypt's CBC channel that "devil worshippers" in weird clothing had turned up for the ill-fated event.

The detentions and prosecutions of artists is a far cry from the short-lived period of freedom in the early days of the revolution. Sadek painted a gloomy picture of the current situation for the arts. "Music and art have become dangerous business in Egypt," he told Al-Monitor.