How heavy metal music is causing a stir in Egypt

A concert in Cairo scheduled for later this month has revived a decades-long controversy over heavy metal music and accusations of devil worship. 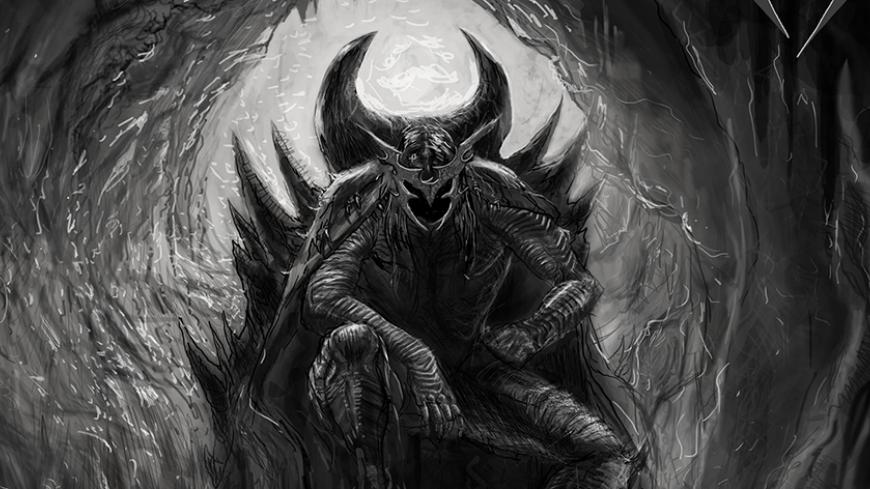 The loud music, frenzied dancing and powerful sounds of a metal rock concert create an atmosphere that can be scary to some in Egypt — especially since it sometimes results in police raids and accusations of devil worship.

Inquisition, in particular, has raised a lot of eyebrows. While Al-Monitor could not find any statements by the band members asserting that they are actual Satanists, the band’s frontman, Dagon, said in an interview with the Isolation Grind blog in 2011 that “Black Metal is very satanic.”

“It is individualism, elitism, rebellion against unnecessary control, pride with a cause. Everything that [the Christian Bible] tells us about ‘the devil’ is in essence what Black Metal is, but through sound waves. Forget [for] one moment about Christianity in general and think of Satanism as the negative pole.”

Mohammed Mamdouh, a guitarist and singer in the band Salasel, has been organizing metal concerts in Egypt since the 1990s. He told the Egyptian O News Agency (ONA) in January that controversy arose back then when one metal concert organizer in Alexandria accused another one in Cairo of including satanic rituals in his concert. The complaint caused panic in the community; some musicians and fans were arrested and some metal concerts were banned, which in turn aroused the ire of metal music fans, and then concerts resumed.

The Manassah website said in a Feb. 4 report that metal music started to be linked to Satanism after an article titled “Satanism club in Heliopolis” was published in 1996 by Rose al-Yousef newspaper.

This was followed by a series of articles on the topic with such colorful headlines as “Satanism slogans on the walls of Mansheya El-Bakry,” “The desecration of the tombs of the Commonwealth” and “Satanist prayers in the desert of Saqqara.” Manassah said those articles clearly sought to instigate wrath against listeners and performers of metal music.

And that they did. Egypt’s news website Dotmsr said in a March article that the first time an Egyptian youth was arrested on charges of Satanism was in 1996. Dotmsr said in 1997 an Egyptian police officer was suspicious about his son's behavior and found out the youth had joined a group performing rituals such as playing and dancing to heavy metal music. The officer feared they might be Satanists and arrested the group. The most famous such case in Egypt’s history happened that same year, when 86 young men and women were arrested for allegedly worshipping Satan at the abandoned Baron Palace.

While security services said they had proof the young people performed rituals worshipping Satan, those arrested denied it. Some authors and journalists began to sympathize with them, saying the matter was only treated prominently in the press so it would be discussed in the community, not so it would be turned into a crime.

Manassah criticized the Egyptian media for deliberately connecting metal music to Satanism, perhaps at the directives of security services or because journalists were not well-informed about this genre of music.

Back then, metal concerts definitely caused panic in Egypt. One journalist at Rose al-Yousef wrote that Egyptian security forces had prevented 35 metal bands from entering Egypt. Hamdiya Hamdi, anchor of the al-Alam Youghanni show, told Rose al-Yousef in 1997 that the genre would lead to hearing loss, was irritating with nonsensical lyrics and was a blind imitation of the West.

Fast-forward to August 2012 when talk was revived about the suspected connection between metal music and Satanism. Ismail Wishahi, a member of the Freedom and Justice Party, the political arm of the Muslim Brotherhood, charged that El Sawy Culture Wheel, a well-known cultural center in Egypt, held a metal music concert for Satanists. The case was dismissed following an investigation.

Mahmoud Kbeish, a law professor at Cairo University, told Al-Monitor that it is not surprising that the state security services and judiciary reject satanic rituals. According to him, the latter are not related to freedom of belief — which is guaranteed by law — but rather involve contempt for other religions.

Satanist groups have also caused panic in other countries, such as in the United States with the emergence of Charlie Manson’s "family" in the 1960s, which purported to embrace a satanic ideology. The gang's members committed many homicides until they were arrested and convicted in 1971. Manson said he was inspired by the Beatles’ 1968 song "Helter Skelter."

As Inquisition will be present at the Feb. 20 concert, metal bands Salasel and Enrage refused to perform. Salasel's Mamdouh told ONA in January that the concert could be a reason for new confrontation between metal musicians and security services and the community, and could result in distorting the image of this music more than in the past. This is the very reason the Egyptian Rock & Metal Scene Facebook page called on Jan. 13 for boycotting the concert.

Mahmoud Kamel, a music critic, believes there is no connection between metal music and Satanism. He said all arts include a certain degree of extremism and should not be judged based on the practices of some extremists.