With the situation in Syria deteriorating daily, Syria’s rock and heavy metal artists continue to make music despite pressure from more than just their government. 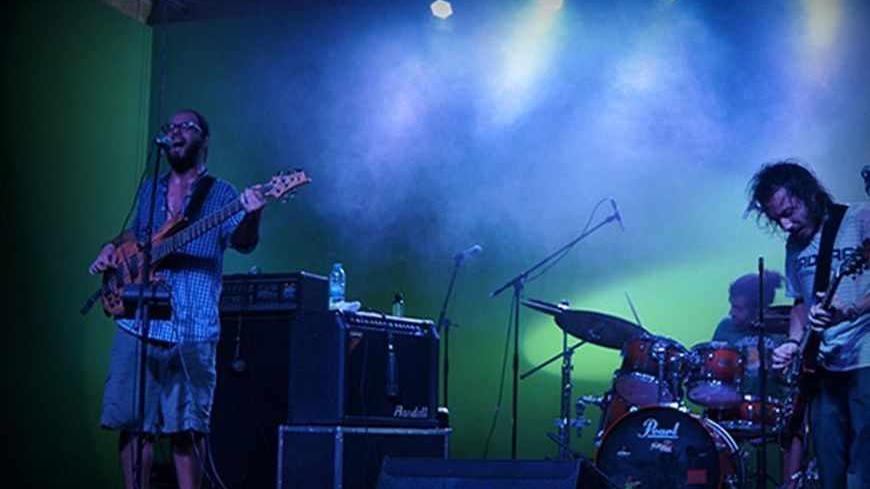 Tanjaret daghet means "pressure cooker" in Arabic, and it’s the name of a three-member Syrian rock band about to release their debut album “180 Degrees.” They describe the title of their first single, Taht El Daghet (Under Pressure), released on Aug. 16 as “our perpetual state of being.”

“If you don’t let the steam come out, there will be an explosion,” explained 31-year-old Khaled Omran, the lead vocalist and bass and guitar player.

The group has been releasing steam since they left Damascus for Beirut in October 2011 to escape military service and pursue music in the much stronger Lebanese music industry. They were one of the headlining bands at the Beirut On the Ground festival on Aug. 25.

“The journey of making this record, which for us started when we left Damascus, has created a dramatic shift in how we see ourselves, our work and life,” said drummer and vocalist Dani Shukri, 24, who wears his long curly hair tied in a bun. “We are disenchanted with almost all we thought was real, starting with this uprising and what it stood for and seeing it crumble to this ugly bloodbath.”

The musicians stress that they are not "revolutionary" artists and not trying to convince anybody of anything.

“We didn’t wait 20 years to start talking about this. We had these problems all along. We don’t sing against [Syrian President Bashar] al-Assad. We expressed how we lived in Syria and why we moved,” said Omran, who is annoyed by the ethnic and political stigmas of the conflict.

“I’m Alawite, so people assume I am loyal to the government — and I am critical of the regime, so the government thinks I’m a threat to national security,” he said, and translated a verse of “Tanfesseh” (Little Steam Releaser), one of the songs on “180 Degrees”:

Don’t give me directions where to go. There’s a brain inside my head so I can think. / Your mouth is closed with stitches, your face on the walls. / Your eyes are a cloud that rains. / Your story looks like mine. Your pressure looks like my pressure.

Before they left Syria, one of their friends, a drummer, was found dead with a bullet in his head. Nobody knows what happened. Prior to that, his sister was attacked and beaten in a rally to support the early uprisings in Libya. Omran was also there, and also beaten up by the police, who called his father, a retired general, and told him that Omran had attacked them.

Leaving Syria hasn’t brought much relief to the band members, who know Syrian intelligence is monitoring the Syrian communities in Lebanon and constantly worry about their relatives' well-being.

“At some point I was sitting with my laptop in front of me, the TV on and my telephone by my side. I smoked three boxes of cigarettes a day,” Omran said, and added that if he had been in Homs and seen his daughter get raped, he would probably put down his double bass and pick up “another instrument.”

The pressure felt by the group didn’t begin with the uprising. Their love for rock and metal was always a mostly underground endeavor.

“In Syria, we don’t have rights as musicians,” said lead guitarist and vocalist Tarek Ziad Khuluki, 24, a short guy with untamed curly shoulder-length hair, stubble and an earring. “You need permission to perform and everything they don’t like, they make illegal.”

When rock and heavy metal started to become noteworthy music scenes in Syria, the regime grew suspicious. According to the group, the authorities went on a countrywide raid on June 6, 2006 (6/6/6), and arrested men with long hair or those wearing black T-shirts, accusing them of being Satanists.

“You want to worship the devil or the goat, I don’t want to see this style in the street,” a shabiha officer told a friend of the band as he was arrested.

“It was like a conspiracy,” Khuluki said, and added that techno fans were accused of being drug addicts.

In spite of the intimidation and the war, there is today a significant rock and metal scene in Syria. The Metallum Encyclopedia lists 22 Syrian bands, mostly from Damascus and Aleppo, but Nicolas, an administrator of Syrian Metal Magazine on Facebook, said there are more, and “a lot of metalheads.” He himself is a member of the band Euphrates, which plays a metal genre he calls Oriental Black Metal.

The metalheads are not all men. Sara Yassin, 19, from Tartous is one of the admins of the Facebook page Arab Metalhead Girls – Yes We Are, which has 3,000 likes. She said she is mostly into the genres "death," "melodeath," "atmospheric black," "doom" and "epic doom." Her favorite Syrian metal bands are Anarchadia, Netherion, Eulen and Brotherhood, whose lead singer is a woman.

“It's the voice when I'm mute. It screams what I can't scream out, it's liberty and freedom. It accepts me with all my flaws my, actions, my character, my past,” said Yassin, who, although not yet in a band, is singing and training on harsh vocals.

For the lead guitarist of the four-person metal band Haunted Cellar from Latakia, metal is “an escape from oppression in life.” While his other classmates blow off their steam through drugs and alcohol, Alexi, as he calls himself, spent all his free time learning to play the guitar — prompting an argument that eventually brought his parents around to accept his passion.

Haunted Cellar performed on Aug. 22 at the venue Al-Zahra in Latakia.

“Performing in these troubled and distressed times is difficult,” said Alexi. “To get security approval, I told them that it wasn’t a metal gig, or they would detain me for sure.”

The band is also familiar with the crackdown on Syria’s rock and metal scene.

“Here in Latakia, if people in the street see you wearing different clothes, like metal T-shirts, they give you odd looks and they can cause problems,” said Alexi whose friends were detained while listening to metal and looking “metal-ish,” accused of worshipping Satan.

But no authorities showed up at the venue to find it packed with 250 head-banging Syrian metal-lovers.

“I think they're busy doing something else,” Alexi added with irony.

He described the political situation in Latakia as “the calm before the storm,” saying that everyone is waiting for the other to make a move. “It does affect the band a little, but we try to ignore the political shit for we believe in the music,” he said, when asked about the band members, who all have different religious backgrounds. “Nobody in the band cares any longer for politics, because both sides of the war are wrong.”

So on Thursday, the band provided others fed up with the war with a chance to blow off their steam. He said the audience represented different positions on the conflict. Latakia is politically divided by its neighborhoods — the suburb mainly inhabited by Alawites and the old city predominately by Sunnis and Christians. Here, people found it obvious who was behind the chemical attacks. The government does spontaneous raids to test their sympathies. Alexi and his brother avoided one by minutes only a few days ago.

Haunted Cellar is working on a demo that includes the song “A Wake-Up Call,” which Alexi said has “some dark meanings about our political situation,” although not in an overt way. “We can't be outspoken in our music, especially now in this time of war.”

There are many things Alexi can’t say on the record. But whether or not an intervention ends the current bloodshed, he knows there is no guarantee of what will come next. If it’s a Jabhat al-Nusra-ruled government, he and the rest of Syria’s metalheads won’t be any better off.

“Then we need a second revolution,” he said. He also doesn’t hold any romantic notions about the motivations of the United States and its "Coalition of the Willing."

But the news about a potential intervention in Syria is spreading in Latakia, creating panic. When Alexi came home recently, he found 300 worried people in front of the bakery stocking up on bread.

Asked about the prospects of an intervention, Sara answered, “I don't care, actually, I just want these bloody massacres to end — no matter how.”

Haunted Cellar performs at a concert in Syria.

For the three exiled musicians of Tanjaret Daghet, the making of “180 Degrees” has been a therapeutic and empowering process in a desolate time. Shukri explained that part of the band’s recent growth involves dealing with stigma and dogma.

“We have been shoved and pushed to be many things. The fact that we are Syrian and play Western-influenced music should not make us pro or anti anyone in particular. It just makes us contemporary.”

It has also made them more critical about power. They released their first single with the tagline, “The bloodshed throughout the Arab World continues. The plan to rob our resources, change our identity and force us to accept a bitter reality is coming to fruition. We hope for better days.”