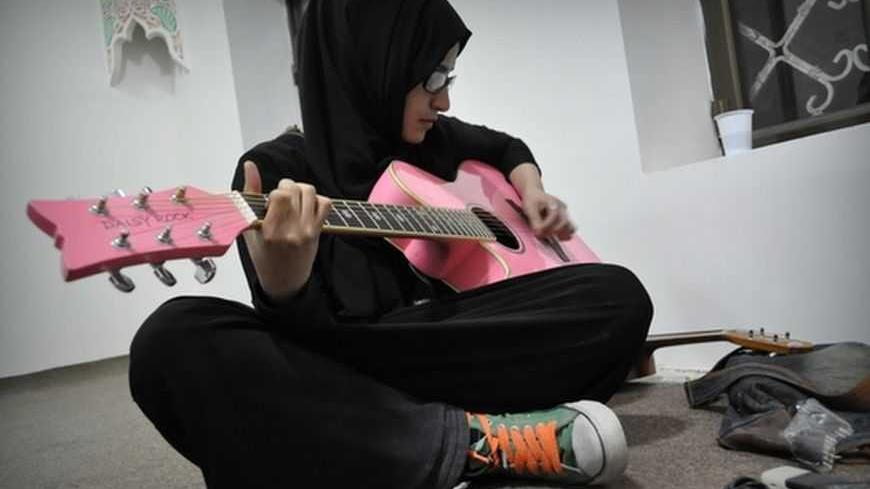 Methal Hamadi played her pink guitar in the music room of the Basement, a cultural center in Sanaa, Yemen. - Janne Louise Andersen

SANAA, Yemen — There was a jam session in the music room of Basement Foundation, a brand new cultural center in Sanaa in early February 2013. The lights were lowered and three musicians improvised melodies on the classical Arabic Hijaz scale.

Khaled Haidar led on his keyboard and the guitarists joined in. Methal Hamadi, 22, occasionally put down her pink guitar to play the harmonica. She also plays the piano, the ukulele and the Melodicas she ordered on Amazon — much to the dismay of her mother, the breadwinner of the family, who wants to see her daughter have a career and make good money. So, much like many talented young Middle Easterners, Hamadi is studying medicine.

When Hamadi was a small girl a teacher at her conservative Islamic school taught the pupils that the word jeans comes from the word ‘jens,’ which means sex in Arabic, and is therefore haram. When she told them about her piano, they replied that it, too, was haram.

“Everything here is haram,” said Hamadi, exasperated by the fact that people say even walking in public with an instrument is haram.

“They call me names. They say, ‘this is stupid you should focus on getting married.’ At first, I used to care, now I don’t,” she said. “Music is the only escape from reality. It makes me feel better.”

Despite her feistiness, Hamadi, who lives in an apartment with her younger sister, says she never really feels safe.

“I don’t want to live here, it’s too depressing. It’s really difficult being a woman here,” said Hamadi, a self-described Muslim feminist. She believes girls should be encouraged to play, rather than only focus on preparing for marriage.

Indeed, her own mother’s patience has often been tested. As a protest against abaya and hijab, which together with a niqab, is worn by the vast majority of Yemeni women, Hamadi once shaved half her head and dyed it green.

Methal Hamadi and her sister played at the Basement, in Sanaa. Video: Janne Louise Andersen

Haidar has had conflicts with his family too.

“My first challenge was to buy a keyboard and get it into the house,” he said. After many heated discussions, his uncle, who took over as head of the family after Haidar’s father passed away, gave in under the condition that Haidar would only play at home.

But the urge to share his music with others drove him to stage a classical piano concert.

“The concerts were horrible. People were chatting and asking, when is this person going to sing?” Haidar said. “I learned that I don’t have to listen to anyone. I just do my prayer on the piano.”

And if playing is prayer, then the Basement has provided a place of worship for a lot of these young artists.

It all started three years ago in Saba al-Suleihi’s basement, when it was a part of the Yemini Knowledge Exchange Forum, which organized cultural and political events every Monday and Thursday. Al-Suleihi, who has since moved to Djibouti, taught workshops and organization skills to many of the activists who run the Basement Foundation today.

“Politicians, artists, writers, journalists, most of society was present in the Basement,” said Al-Suleihi’s nephew, Mohammad al-Suleihi, a graphic designer and part of the Yemeni Knowledge Exchange Forum. He said that when the revolution erupted, Basement members often took different political positions, but they still managed to gather twice a week and keep the spirit of the Basement intact.

In fact, Haidar first heard of the Basement during the revolution, while in Change Square. It was in the square, where a previously unheard of feeling of unity between the traditional and modern prevailed, that Khaled met Ahmed Asery from the reggae band 3 Meters Away. Asery, one of the pillars of the Yemeni music scene, introduced Haidar to the Basement, which at the time was made of several underground spaces in Sana’a. Haidar quickly became part of the scene and eventually became the pianist for 3 Meters Away.

Around the same time, political factions such as the Islamist opposition party al-Islah started to dominate the square, which brought an end to the bustling spirit of art and unity.

“Islah doesn’t believe in art at all. They controlled the place and didn’t allow the artists to show up, they think music is forbidden and drawing also,” Haidar said.

That did not stop the young artists from keeping the spirit of unity alive at the Basement though.

“In Change Square everybody accepted the way of the other,” said al-Suheili, 22, who honed his writing skills through courses at the Basement. “And that’s also the main idea for the Basement.”

Another volunteer Rinad Mohad, 26, who handles PR for the Basement, learned to draw at the Basement and has showed her work there. Recently, she has taken up short stories about girls and women in the community.

“We don’t hide anything inside of us, we say everything, positive or negative,” she said. “The Basement cannot deny anybody, even if al-Qaeda wanted to do a seminar we would invite them in.”

A visit to the Basement is a testimony to that fact. One might go there to join a debate, watch a film or see an art exhibit, but will probably also hear the sound of screeching guitars and fast drums.

The self-taught metal band Toxic Roulette rehearses at the Basement. They are a metal band without a drum kit, substituting a tabla in its case and two pencils for bass drums and drumsticks. It’s not the head-banging beat of a drum set, but it works.

“Toxic reflects our feelings to this country. It’s poisoned. A roulette sometimes bring luck, sometimes death,” said Fadi al-Harbi, the drummer and a visual artist, about the band name.

Al-Harbi, who holds a bachelor degree in Radio and Television, camped in Change Square for eight months where he drew, exhibited and taught art to anyone interested. After he discovered the Basement he says he “got stuck” there.

“People are not used to this kind of stuff — you know the noise of metal. We will probably be considered psychopaths,” said the band’s guitarist and vocalist.  “We don’t give a damn, whatever happens, happens.”

But the band members know very well that the stakes are high.

The guitarists of Toxic Roulette praticed at the Basement . Photo: Janne Louise Andersen

Stories about a drummer who was attacked in his own house, beaten up and had his long hair cut off by a group of fundamentalist Islamists have circulated through the artists’ circles.

Asery, from the reggae band, said he has been attacked on stage, in the street and on Facebook because of his dreadlocks and his music. It doesn’t deter him from expressing his ideas and calls for a "mentality revolution" that is not just about regime change, but a cultural change. And the Basement is one of the places that make him optimistic.

But it is no safe haven either. Last year a group of men wanted to close down the space and called the kids there infidels. That warning was followed by a bomb threat, which prompted the activists to hire security and stop events for a couple of weeks.

“We went to the police, but they did nothing,” said Mohad. “We invite everyone here. This is our way to protect this place. Our door is open every day.”

Janne Louise Andersen is a New-York based Danish journalist who specializes in the Middle East. She has written for Rolling Stone Middle East and The National and various Danish media such as Gaffa, Opinionen, Weekendavisen, Politiken. Follow her on Twitter: @jannelouisa