Young photographers carve a space for themselves in a society that does not always consider the art form a legitimate profession. 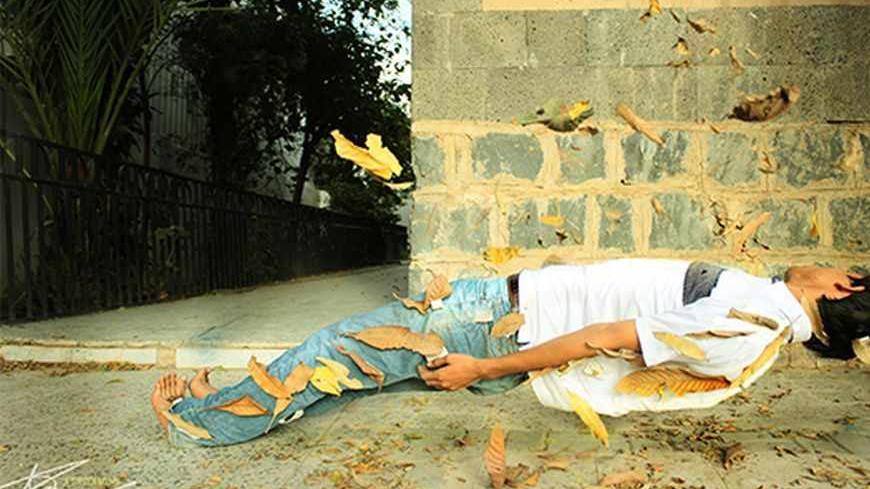 Amr Attamimi, 22, lives a double life. He studies information technology and spends most of his waking hours working in his father’s store in Sanaa. But early mornings are his, a sacred time when he develops his real passion, photography. While the advantage of working at dusk is the great light, the disadvantage is the lack of models, so most of his photos are self-portraits. Just the same, Yemenis are not crazy about public photography.

In fact, girls have physically attacked Attamimi when they thought he was taking their photo.

“I can’t walk around with my camera,” he complained in an interview with Al-Monitor.

Attamimi bought his first digital single-lens reflex camera three years ago with money a dear friend lent him. He built his own studio with halogen lights from the market and homemade light boxes.

He is mostly a landscape and conceptual photographer, which includes levitation photography and what he calls "dark art." In “Smothered,” Attamimi is tied to the wall covered in white sheets, while in “No Way Out” he lies on a roof, tied up and surrounded by burning paper. In “Chained in Anguish,” he kneels in a dirty bathroom, hands tied, crying blood, in a T-shirt that reads “Feel Different.”

”If you don’t break the chains you were born with, you will never be something, only be like everybody else,” he said about the message of these photographs.

The darkest image is probably “Reincarnation,” in which Attamimi comes crawling up the ground, legs and arms first like the Japanese ghost in the horror movie “The Ring.”

“I was buried and came out a different creature,” he said and explained his fascination for this type of art, “I believe there is a dark side of me like in everybody else.”

It is when Attamimi feels depressed that he is most creative, channeling the emotions into his photography. In “I was Waiting for this Moment,” Attamimi levitates above ground on a bed of leaves that he explains are “taking him somewhere else.”

“Probably most of them express pain because of how society works here,” he said, calling for open-mindedness and appreciation for photo art.

“In general, it’s pretty tough if you have a new idea and want to present it to the society around you. They wouldn’t digest that immediately, so you have to take the toll and wait and suffer until they get the idea,” he continued, a sentiment reflected in “Patience is a Virtue.”

Attamimi’s family does not encourage his photography either and convinced him to study information technology. “They see all art as a waste of time — singing, playing the guitar or photography. They say, ‘go for business, go for something real,’” he said. But his dream is to do a master's in graphic art and visit the Louvre in Paris. He is taking French classes at the French cultural center in Sanaa, where he is also currently working on an exhibition.

His first exhibition, which his family didn't know about, was at the Basement Foundation, a the cultural center. No one bought anything, and he paid all the expenses himself; yet, it was one of the best days of his life. Although some said they didn’t get his art, they appreciated it being new and creative, and he received a lot of encouragement. Even from the minister of youth affairs.

“He thought that my art was creative; however, he didn't appreciate the dark art I made. He said, ‘Why are you so negative in your artwork?’” One of the images he frowned upon was “The Blow of Grace,” which shows a staircase with Attamimi's limbs in different boxes.

“It just reflects that artists will give their lives away to make a masterpiece,” he said. “I just want people to appreciate my work, not look at me as if I’m holding a gun and not a camera.” In fact, he added, holding a gun in the street is more normal than a camera.

Attamimi is not alone with that complaint.

Seven months later, the perception of photography had already improved greatly at the protests in Change Square. Sharif was there and so was his older sister and photography teacher, Amira al-Sharif. Back then, she worked as a freelance photographer for a number of Yemeni and international media.

“A woman came to me, made the peace sign and asked me to photograph her. I was like ‘wow,’” Amira recalled. What happened made people understand the importance of photography, how it empowered us.” People would join a circle of hands around Amira, protecting her while she was photographing the military.

“If I get shot you have to take this camera and give it to National Yemen,” she told a protester. “No, I'm not going to let you die,” he answered and several people would guard her. That also happened during the attack on the US Embassy.

A protester and defector from the national army volunteered his body for Amira, so that he would take the shot, not her, while she was photographing the embassy. She was overwhelmed.

“We knew it is history, we couldn’t miss this moment,” she said.

Acknowledging her skills and courage, the International Center for Photography in New York gave her a scholarship for an annual photojournalism program in 2012, which she exploited to the fullest. She graduated with the exhibition about the lives of ordinary American women, which garnered her a lot of attention in US media.

She has since moved back to Sanaa to teach photojournalism and pursue her passion for photography of Yemeni women.

”I was the luckiest person. I want to invest in other photographers like others invested in me,” she said.

So she embarked on a project she calls “creating a new generation of women photographers in Yemen,” teaching intensive photojournalism courses all over Yemen for young women and men. So far, she has 282 students, many of whom have real talent. “Yemeni female photographers are shy, but they invest more time and work harder than male photographers,” she said, and admitted she has a bias for women.

”I really don’t find them [men] visually interesting,” she said and laughed. ”It is like school to be with one of them, maybe because their lives are so much harder.”

It is also more of a challenge photographing someone without showing her identity.

“You build relations and trust. I always kept my word to the women.”

Many of Amira’s photographs will be published in an upcoming book with short stories about Yemeni women’s everyday life titled “Women Morning in Silence,” by Yemeni journalist Elham al-Ogabi.

”I can see me in all these stories, and many Yemeni women will see themselves.”

Amira says she has always had to deal with resistance against public photography. While working for the UNs High Commissioner for Refugees in Abyan in January, she found a letter with a death threat on their car from al-Qaeda written in red ink.

Another time, while photographing a wedding, one man told her that if she photographed the women he would dig her up from her grave. In those situations she just disappears. She said she has had to come to terms with the fact that just as her camera can bring light to the world, it can also result in death.

Still, the intimidations don’t deter her from venturing out into Yemen’s rural areas in search of the untold stories of Yemen and its women.

“I used to get scared,” she said and described how men claiming to be police would just show up and demand to see her ID.

“Now, I won’t allow anyone to take my camera,” she said about her beloved Nikon D7000. She spent her last paycheck on a new lens that weighs nearly 7 pounds to add to her other 10 lenses, which the 5-foot photographer always carries with her — like a donkey," she said.

Attamimi is also certain that photography is an art form that has come to stay in Yemen. “I hope Yemen will get used to all kinds of photography. And one day, people should appreciate photography in a way that carrying a big camera won’t be considered a threat.”

He said he has been seeing more and more amateur photographers, a development he welcomes.

“I believe that photography will be a famous thing in Yemen, and that there will be many internationally recognized photographers.”

Janne Louise Andersen is a New-York based Danish journalist who specializes in the Middle East. She has written for Rolling Stone Middle East and The National and various Danish media such as Gaffa, Opinionen, Weekendavisen and Politiken. On Twitter: @jannelouisa