The Beirut Image Festival, in its first year, is providing a forum for young photographers raised on the digital imagery of social media to get a taste of the art of photography by exhibiting their works in venues alongside veteran photographers. 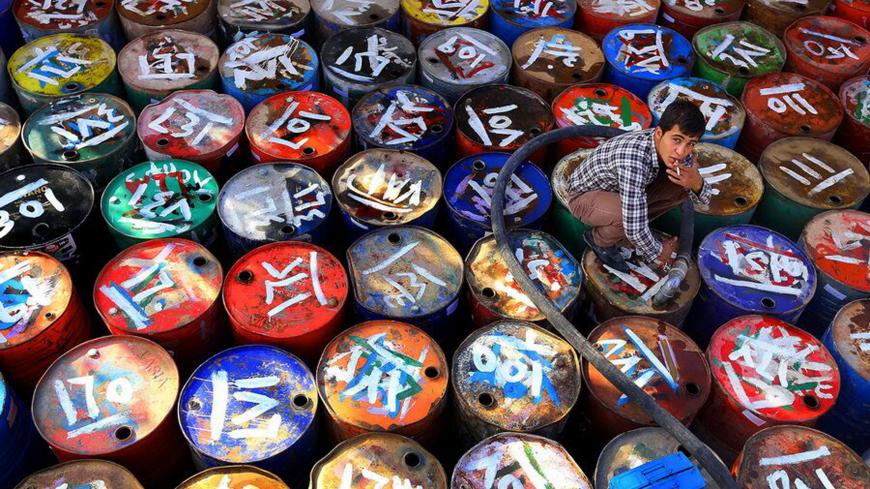 A photograph of a boy on oil barrels taken by the Iraqi photographer Ceerwan Aziz is shown at the Around the World exhibition at the National Library as part of the Beirut Image Festival, 2019.

“Everyone has a phone. Everyone sees hundreds of images a day,” Ibrahim Dirani, project manager of the Beirut Image Festival (BIF), told Al-Monitor. “We have integrated this culture, but we don't link it to an image that we stand in front of and really look at.”

BIF, which runs Sept. 5 through Oct. 5 in different locations in Lebanon, seeks to link the art of photography with the culture of the everyday posting of digital imagery online by exhibiting works by established artists and photojournalists alongside those of emerging photographers. The juried show features 600 photos from 122 photographers displayed in more than a dozen venues around the country.

"[While organizing the festival], we expected 250 applicants and about 1,500 photos.… We got 678 applicants and 3,800 photos,” Dirani said, adding that the photographers’ backgrounds and work exhibit great diversity, which is also reflected in the variety of festival venues. “Reaching new communities is really important right now.… We want to reach new audiences and new eyes.”

BIF events are being held in places as different as the ancient city of Baalbek, in the Bekaa Valley, and the seaport metropolis of Tripoli, on the Mediterranean. Festival venues include exhibitions in public spaces, such as along Beirut’s waterfront and at Beirut Souks, in the capital’s central district, but in short, wherever people might go. “[I hope audiences] just go for a coffee and see these photos,” Dirani said.

Ramzi Haider, head of the BIF steering committee, told Al-Monitor, “A lot of people have a phone now, and they take photos, but they need someone to guide them from the older generation who have used professional cameras. Our aim is to transform everyone into a professional photographer.”

Haider, a veteran photojournalist, is also the founder or co-founder of the three organizations behind BIF: Zakira, a Lebanon-based NGO dedicated to the promotion of photography; Dar al-Mussawir, a Beirut cultural space for photography; and the Union of Arab Photographers.

Despite Haider’s involvement in these organizations, he remarked, “Personally I don't like institutions. They can swallow the person. But they are important for structuring your work, preserving what you are doing and putting it into a context. Institutions have longevity.”

Haider’s institutions are encouraging new talents, such as Hanan Hindawi, a Palestinian-Lebanese photographer whose BIF exhibit is at the CUB Gallery in Beirut. Hindawi, 17, is the youngest photographer in BIF.

“The festival means a lot to me, because the people who taught me how to photograph are running it,” Hindawi told Al-Monitor. “It feels like my family is running the festival.”

Hindawi also spoke of the importance of new technology, asserting, “Social media helped a lot, because the only place I could publish myself before the exhibition was on social media. It is the reason I got in [BIF].” Dirani testified to Hindawi's statement, remarking, “I used to see [Hindawi’s] photos on Facebook, so when we called for applications in June, I asked her to apply,… and she got accepted by the judges.”

Hindawi's photographs for the exhibition tackle depression, early marriage and social conflict in Lebanon in general and in particular in the Shatila refugee camp, where she lives. She used props, including nooses and body bags, shot in muted colors and minimalist environments, to produce striking images on these subjects.

“I started with photojournalism,” Hindawi said, referring to Lahza, a photojournalist program she took part in through Zakira when she was 14. She said that it seemed difficult in the beginning, because the photographs needed to tell a story.

“[Eventually], it wasn’t too hard for me to come up with topics,” Hindawi said. “I live in Shatila camp, which is a conservative place where there are a lot of problems and a lot of issues to talk about.” For BIF, Hindawi moved away from photojournalism and toward more conceptual art, taking photographs in which she is the subject.

“I want to talk about my life, so I need to be the subject of my own photography," she told Al-Monitor. “My work is very conceptual. You need to [really] look at it. A lot of people don’t get it, but they take something else from it. [This difference of interpretation] is why I like photography.”

The festival showcases a wide variety of works, ranging from up-and-coming artists exhibiting experimental pieces to images by established photojournalists.

Among the latter group, Haitham Moussawi has been a practicing photojournalist since 1996, working for local and international publications. His BIF show at the Letitia Art Gallery features a series of photographs he took over three years in Lebanese prisons.

“I am the only one who has ever gotten permission to go into the jails [in Lebanon],” Moussawi told Al-Monitor. “It is something completely unknown to the public. I wanted to shoot something to show people what was happening in the prisons.”

Moussawi photographed the poor conditions, daily life and relationships in male and female prisons and juvenile detention facilities. He had to work to establish a rapport with his subjects, gaining their trust in precarious environments and amid often-misunderstood situations.

“It was very, very difficult to get into the women’s prison,” Moussawi said, referring to both the bureaucracy and the prison environment itself. “[The women] have their own way inside, and it is very different for a man to enter [their world].” Moussawi referred to a photograph of three women praying in their cell as an example of an image that could be taken only after one establishes a good deal of trust with the subjects.

“I wanted to show people the struggles that people have when they are in prison,” Moussawi said. “It is supposed to be a place for rehabilitation and for people to learn and get better, but it is not that.”

There have been reports of severe overcrowding and abuses in Lebanon's prison system in excess of what Moussawi captured in images, raising the issue of whether special efforts had been undertaken to “tidy up” before his arrival.

The documentation of life inside prisons, places shrouded in mystery and misunderstanding, exemplifies BIF’s aim of using photography as a form of communal memory and a way of passing on knowledge. Another goal is to remember those who pioneered the medium, which the festival does by its very existence. The festival is held in honor of two early Arab photographers, Karimeh Abbud and Marie el-Khazen, whose works are exhibited at the cultural space Beit Beirut.

Haider explained, “They are technical photographs. They were taken ‘a thousand years ago,’ but they look modern.… They represent the early development of photography in the Middle East, and we want to celebrate them.”