An exhibition held at the center of the protests in Beirut has introduced photography to the streets and has challenged artists to adapt to the revolutionary moment. 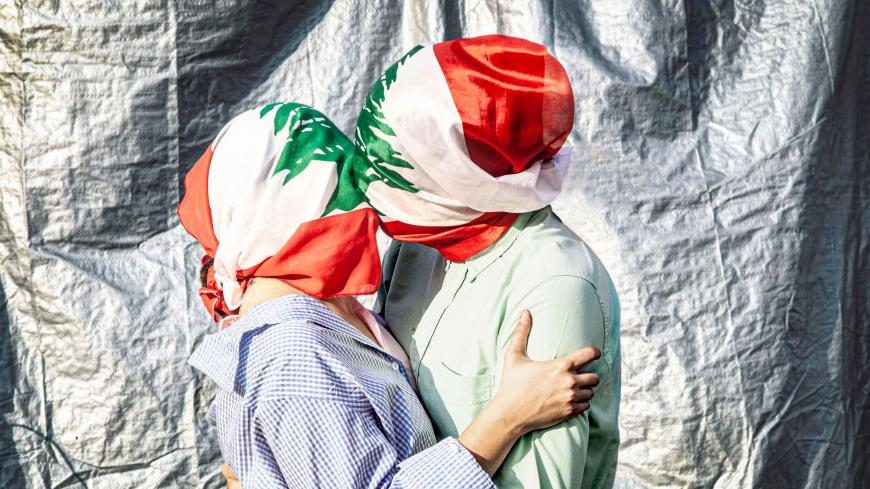 BEIRUT — Lebanon has been experiencing protests over the dire economic conditions, corrupt ruling elite and political system for a month. Throughout the protests, photographs have been shared widely on social media to inform people of the latest developments and to organize where to meet.

The streets have been dominated by music and graffiti, with photos reserved for social media and news. However, this is beginning to change and with it photographers are starting to readdress how and why they present and conduct their work.

On Nov. 14, 11 local photographers had their works hung on the partially destroyed barrier outside of the unfinished theater at the heart of the protests in Beirut, known as the Egg, in an exhibition titled “Revolution.”

Organized by the Beirut Center of Photography, Chantale Fahmi, the center's event manager, told Al-Monitor the exhibition’s goal “was to give visibility to young local photographers."

"Now that everyone is here [in the streets] and everyone is documenting [the events], the number of photos we see on social media is crazy. … [This exhibition] is a very small selection of the photos taken," she said, pointing out that the photos did not only have journalistic value, but they were aesthetic and unusual as well.

This exhibition was ideal for photographers like Elias Moubarak, who displayed the two photos he took during the first days of the protests at the outskirts of the northern seaside city of Jbeil (Byblos).

“I love the photographs being shared; I think we should just keep on letting people express themselves. Photos, music, graffiti — we have so much talent in this country," Moubarak told Al-Monitor. “So much is expressed right now because we have been keeping many things inside.”

He also said he was “too slow” to keep up with the photographs that kept appearing on social media. “I was never into social media, or I have an on-and-off relationship with it," he said, explaining that he favored a more deliberative approach to photography that was more suited to exhibitions.

Fahmi said that the exhibition should not be seen as a classic gallery exhibition, as the revolutionary moment has challenged the artistic community’s norms and structures. With many galleries striking during the first weeks, art organizations are consciously changing their approach, he said.

She explained that they choose to display the photos on the walls outside the Egg, because the walls inside "looked like a gallery." The photographers felt that the exterior walls, however, were part of a public space and, therefore, in line with the inclusive aspect of the protests.

This aversion to simply continuing the practices of the artistic community and gallery spaces is also on the minds of many photographers, who are adapting to the new climate.

"The revolution is about breaking elitism — that is the beauty of it," Omar Sfeir, a filmmaker and photographer whose works are displayed in the exhibition, told Al-Monitor. "This is why I love the 'thawra' [revolution]. It is breaking with everything."

Another way Sfeir sees the old system challenged is through the free sharing of art. His piece, the only staged work at the exhibition, is titled “The Lovers.” It shows a couple clad in the Lebanese flag kissing. The work — itself a recreation of “The Lovers” by Rene Magritte — was shared widely among the large Lebanese diaspora online and used by other local artists in their work.

“This is the surreal part of the thawra — you don’t possess anything; everything you do will become a generous expression in the hands of every person. For me, this is not my picture; it is thawra’s picture," he said.

Sfeir plans next to remove all institutional barriers and personal ownership between photographers and the streets by putting photographs directly onto walls at protest sites. He calls that “creating a direct connection with space.”

Other photographers are questioning the very act of trying to capture the revolution in these early stages.

“It has become hard for me to put the camera between me and people. In this revolution, I was a civilian first and an artist second,” Malak Mroueh, a photographer and filmmaker, told Al-Monitor.

Mroueh criticized photography and art events within the protests. “There is a thin line between engaging in photography and using the revolution as an opportunistic way to get exposure,” she said, explaining that some photos were taken during the first days of the protests when roadblocks involved burning tires and debris. "These have been used as a tool by Western media to portray the revolution as a really violent one... [but] there are also really powerful and beautiful images. The revolution is not black and white; it has a lot of nuances that are fading away or are not seen.”

Mroueh had a photograph shown at the exhibition, a small picture taken on an iPhone of a bruise she got during a scuffle between protesters and supporters of the Amal and Hezbollah movements in Beirut on Oct. 21.

She said, “I lost myself in the revolution. I wasn't an individual; I was part of a community. So when I found myself on the ground beaten, I came back to the individual. I didn’t want to be a story … [but I] wanted to make a statement, which is we can be strong in our weakness — as cheesy as it sounds — a bruise is a sign of resistance.”

However, Mroueh still prioritizes “the civic duty of rioting and taking to the streets and using your own voice. "I have used all my energy [doing this]," she concluded.