In a neighborhood in Amman, a photography exhibition honors Karimeh Abbud, also known as the "Lady Photographer," who stood apart from her male contemporaries with her unique access to Palestinian women in their homes. 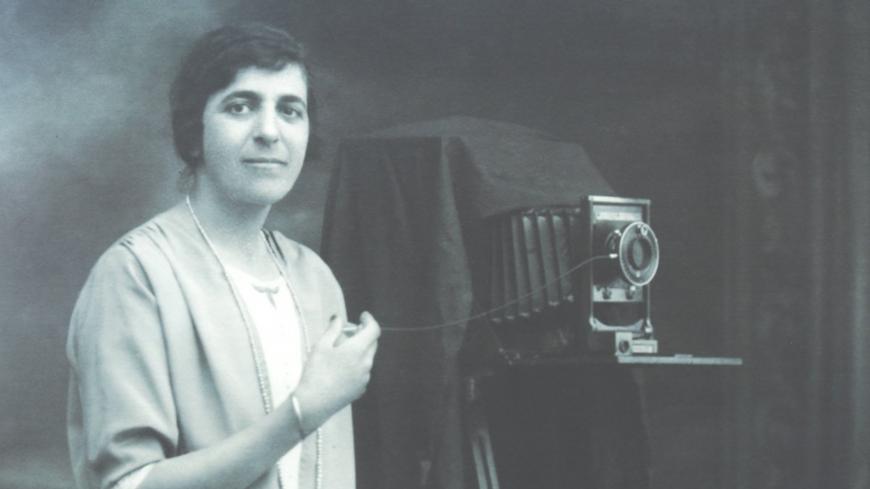 Karimeh Abbud was the first Palestinian and Arab female photographer to set up a commercial studio of her own. Posted Sept. 10, 2017. - Twitter/@7iber

One legacy of photographer Karimeh Abbud lies in the unique way she captured daily life in the 1920s and 1930s. Known as the “Lady Photographer,” she was the first known Palestinian or Arab women to have set up a photography studio catering to the public. Images depicting the lives and the era she saw through her lens are currently on view at Darat al Funun (House of the Arts) in the Jabal al-Webde neighborhood, in Amman. Self-titled, the show is the first comprehensive exhibition of photographs from the collection of Ahmad Mrowat that only came to light in 2006.

Abbud's photos are testimony to a slice of the 20th century, bearing witness to life in British Mandate Palestine and Lebanon. Unlike her contemporary male photographers, Abbud had access to the private lives of women. With such entree, she photographed Palestinian women from different classes inside their homes, some preferring traditional dress and others sporting more modern styles and occasionally professional attire, like a nurse’s uniform. Along with capturing the character of the women photographed, Abbud's lens also recorded interior lifestyles of the time, secondarily documenting furniture and interior design.

“I was impressed by the details she brings to her pictures and her portrayal of various professions, leisure activities and family unity,” Susan Ibrawesh, a visitor to the exhibition, told Al-Monitor. “We — as Jordanians of Palestinian origin — can imagine our grandparents’ everyday life only through photos,” she added, looking at the young athletes and the families Abbud photographed.

A regional and international center, Darat al Funun presents traveling and permanent exhibitions and organizes lectures and gallery talks, publications, conferences and film screenings. The center has a print and video library and offers fellowships, art residencies and exchanges.

Darat al Funun dedicated its 2017 program, Falastin al Hadara (Palestinian Civilization), to marking the centenary of the 1917 Balfour Declaration, 70 years since the 1947 United Nations resolution for the partition of Palestine, and 50 years since the 1967 Arab-Israeli war and occupation of the West Bank, Golan Heights and Gaza Strip.

“We organized 10 exhibitions on the art and culture of Palestine: early music, architecture, cinema, design and photography,” Luma Hamdan, Darat al Funun's managing director, told Al-Monitor. “We also wanted to shed light on the modernism of pre-Nakba Palestine.” The pioneering Abbud, indeed, symbolizes the modernity of the time.

Born in Bethlehem in 1893, Abbud came from a family that valued education for girls. She studied Arabic literature at the American University of Beirut, while her cousin, Shafika, studied medicine. According to Mrowat, Abbud came into possession of her first camera as a gift on her 17th birthday. She began working as a photographer in the 1920s, in her home, taking pictures of women and children and to commemorate special events, such as weddings and other ceremonies.

In 1932 in Al-Karmel, a local newspaper, she advertised herself as the “only national female photographer.” She printed her photographs in postcard format, with “Lady Photographer” stamped on the back in Arabic and English, a branding strategy that would make a modern marketer smile. During her career, she would open studios in Nazareth, Bethlehem and Jerusalem.

Although Abbud was primarily known for her portraits, as Mrowat's collection attests, she also had an eye for social and geographical landscapes that she documented while traveling around pre-1948 Palestine. As the widely respected street photographer Josef Koudelka said at a public event during the Festival of Photography in Amman last April, “The pictures are not made with the hands, but also with the feet.”

Abbud channeled modern documentary and freelance photographers, traveling around pre-1948 Palestine portraying life along the way, such as women working in the fields. In many of her social landscapes, it is possible to recognize her approach to photography as craft and art and the professional's quest for the best image through the use of composition and light.

Several female pioneers stand firmly behind the scenes of Abbud’s first exhibition in Jordan. The space hosting Abbud’s work, Darat al Funun, was founded by Soha Shoman, a patron of the arts in the region and an artist in her own right. Shoman began renovating the historical building housing Darat al Funun in the 1990s and opened all the buildings in the complex by 2013. Near the complex stands Darat al Tasweer, a center for the research and practice of photography in Amman, founded by Linda Khoury, another pioneer of the arts in the Arab world.

“Thanks to this exhibition, I learned that a Palestinian woman of that era got married at 35!” Ibrawesh told Al-Monitor, laughing about herself still being single and 32. “This is encouraging to me to continue my work, while still hoping to get married! I now consider the ‘Lady Photographer’ an inspirational figure for her time and for our generation as well.”